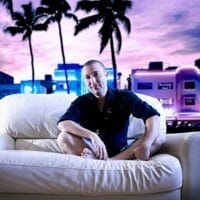 Dan Goldman is an author, illustrator and designer. Creator of the tropical-horror series RED LIGHT PROPERTIES currently running on Tor.com, his previous works include the Eisner-nominated web-to-print phenomenon SHOOTING WAR, and the non-fiction journalism-comic 08: A GRAPHIC DIARY OF THE CAMPAIGN TRAIL with The New Republic’s Michael Crowley.

Dan is also a frequent speaker on digital comic creation and distribution at venues ranging from MIT’s Futures of Entertainment conference to his annual “Going Paperless” panels at the New York Comic-Con to SXSW Interactive.

Raised in Miami and steeled in New York, he currently lives in São Paulo, Brazil.

I’m currently working on my webcomic series RED LIGHT PROPERTIES, which launched in January on Tor.com, that tells the story of a small real estate firm on Miami Beach that exorcizes and lists haunted homes, and runs a peer-to-peer business model to connects these “previously-haunted” homes with victims of foreclosure.

It’s the first graphic novel in a series that follows the group as they poke and prod the membrane between life and death for the benefit of those left homeless by the mortgage crash.

New chapters are posted every other Tuesday at Tor.com until the novel is complete; you can jump into the first chapter right via .  It will of course be in bookstores once I’m finished as well.

I’m crazy for pro-level tablet computing; I’m using a Modbook for every aspect of my work/office/life now. We are so close to the dream machine I’ve wanted for years, I can taste it.

Tighter integration of storytelling into what are videogames (see: Uncharted 2 or Heavy Rain); we’ve been watching the next form of mass storytelling media being born slowly for years, but it’s going to start walking and talking soon.

The continued evolution of digital distribution of all kinds of media; clearly Apple gets major props for shaking up the paradigm across multiple industries, but there are so many better ways to do it without them just around the corner.

My ideas come from anywhere when I least expect it; I’m constantly diving out of the shower to the keyboard getting ideas out before they fade away.

I’ve never been a noodler; I write full scripts for everything before I draw a single line.

Never trust anyone to market your projects for you; while having help is often necessary, no one will ever love your project more than you do… or be able to get others excited about it. For that very reason.

I read Charles Stross’ science fiction novel ACCELERANDO a few years ago, and it still contains more foresight/insight about the world that quickly approaches than most nonfiction or concept books I’ve read since.

My favorite tool is my current computer, the Axiotron Modbook (www.axiotron.com).  It’s an after-market modfication turns a Macbook into a fully-functional OSX tablet, which I use to write, draw, render out my 3D models, as well connect with my family and friends around the world.

Stop talking about your ideas and start doing them.  A finished piece of work will speak for you better than a thousand great plans or proposals.

Does your reliance on drawing software and technology enable or hinder your ability to tell your stories?

It definitely enables me get effects I could only ever approximate visually without them, a thousand times yes.  Before going digital, I would scratch out my early comics with brushes and pens and was never happy with the results.  Now I can create work that’s within spitting distance of my mind’s eye, and do it faster.

Since January of this year, I’ve drawn 140+ pages of RED LIGHT PROPERTIES using a combination of things I’ve learned over the last five years… and I’m writing this in early June.  By year’s end, I hope to be well into the second volume of the series MALA FAMA.

What abilities do you have in your dreams that you wish you had in waking life?

When I was three, I had a fever dream and “someone” was with me in it who taught me how to fly.  I’ve been able to fly in any dream since then.