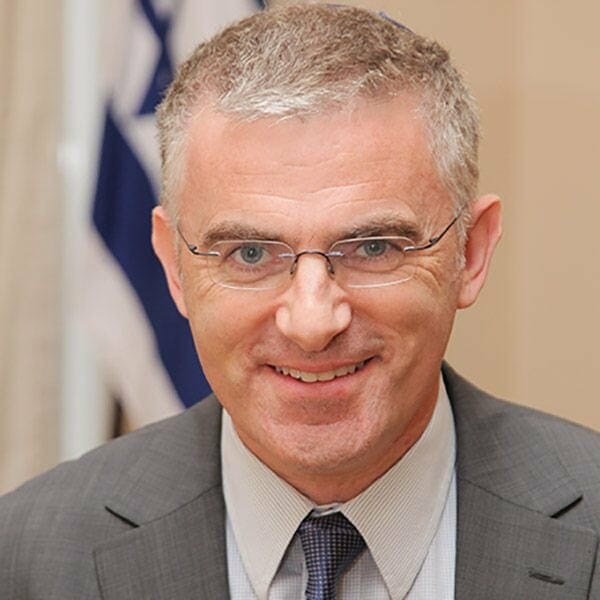 “Invest in your team.”

Daniel Taub, an Israeli diplomat and international lawyer, has written extensively on Israel and the Middle East. He has had articles in The Times, the Guardian, the Daily Telegraph and the Huffington Post, to name a few. He wrote Parasha Diplomatit, a book of insights on each of the biblical weekly sections. His analyses on each of the Torah sections include humor, a political perspective and more.

In addition, Mr. Taub is the creator and chief scriptwriter of the popular Israeli drama series HeChatzer. This series is set in an ultra-orthodox Hasidic sect and Mr. Taub describes it as “a cross between Downton Abbey and the Chosen.” The shows works to break down stereotypes of secular and religious divisions in Israeli society.

Mr. Taub writes and lectures widely on international law and negotiation theory. He was also a speechwriter for Israeli President Chaim Herzog.

How did you become involved in Israeli diplomacy?

When I moved to Israel I started to work as an intellectual property lawyer, because the tech revolution was in its infancy and very exciting. But in the early 1990’s the Madrid Peace Conference suggested that there was a chance to have serious peace negotiations with Israel’s neighbors. I had studied international law and negotiation theory and really wanted to be a part of that, so I took a leave of absence to join the Israeli foreign ministry. At the time, I didn’t realize that this short detour would last more than 20 years!

What does a typical day as Israel’s Ambassador to the UK look like and how do you make it productive?

No two days are the same, which is one of the joys of the job. There are five or six key areas of activity: Political dialogue, business and tech cooperation, academic cooperation, security and intelligence sharing, the Jewish community and other faith communities, and media and other kinds of public diplomacy. You try to keep a balance between them, and in each of them try to think of areas or populations that haven’t been explored yet and reach out to them.

Can you give some examples?

We had a great time finding ways to build bridges between young British entrepreneurs and the Israeli tech ecosystem. For example, together with Facebook and Google, we started a Dragon’s Den style start up competition in which early stage start ups could compete to win a training program in Israel. We also tried to find new ways to explore interfaith cooperation. I got to teach Biblical Hebrew to Church leaders and hold joint Moslem-Jewish Iftar feasts and other events.

What is one habit of yours that makes you more productive as a diplomat?

Probably curiosity. I think it really helps as a diplomat if you are genuinely interested in the people you are meeting and the things they are passionate about. The people you meet genuinely appreciate this and your own horizons are broadened.

Worry less! Particularly as a child of immigrants, the question what are you going to do with your life, and what is your career path, was always in the air. In fact my personal career has been rather haphazard – I’ve worked as a lawyer, a diplomat, a television writer, and had a chance to work with presidents and prime ministers, but none of that was planned out carefully in advance. I think that personally my life has been richer for this.

Are there any diplomatic techniques you can give to our readers?

I’d suggest two. The first is to work in the realm of the possible. There is a great saying among diplomats and government officials: “You can change my opinion, but you can’t change my instructions!” Try to spend your time and effort working on those areas where progress is possible. Second, be an active listener. As diplomats, we are trained in how to present our case well, but much less in how to actively engage and hear our counterparts. Not only is it a critical learning experience, but particularly on contentious issues it’s often hard to get your point into someone else’s head until they’ve got their own ideas out.

What management advice would you give?

Invest in your team. That means spending time and effort in selecting the right people, and then spending more time and effort in developing them. On a personal level it’s important to think about what areas you need particular support in, which perhaps are your weaker areas, and finding people who can complement your skillset and fill the gap. Investing in your team also means working to create a culture in which people are empowered to voice criticism or minority opinions – which are crucially valuable but can often get lost.

What is the one book about Israel that you recommend our community should read and why?

There are some great histories of Israel and the Middle East, but to get a deep and human insight of how Israel got to where it is today, I’d suggest Like Dreamers by Yossi Klein Halevi. Through the remarkable stories of a small band of soldiers who fought in the battle for Jerusalem in the Six Day War in 1967, he paints an powerful personal picture of modern Israel.