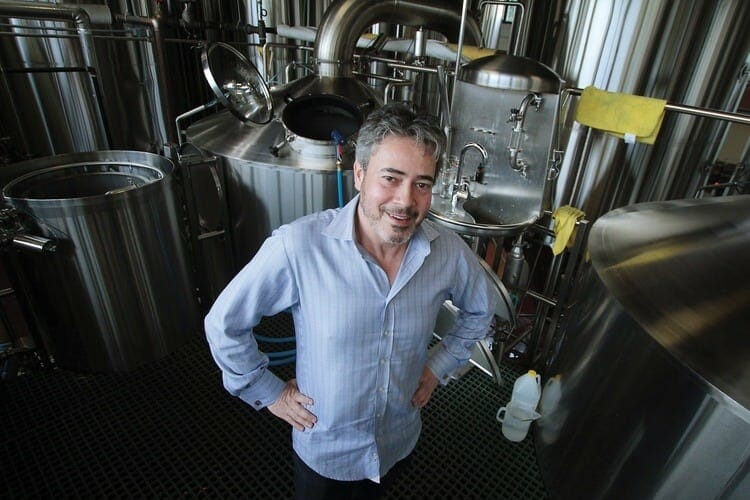 The clink of bottles, the smell of beer, the buzz of activity – this is Steamworks Brewery. This is Eli Gershkovitch is in his element. Having long ago traded in his navy suits and wingtip shoes for jeans and steel toed boots, Eli’s face lights up as he scans the operation, chats with his head brewmaster, Julie Hanlon, and thinks about where he’ll take his passion for craft beer next.

That passion began in 1987 when Eli, law degree from the University of Toronto in hand, adventured through Europe and tasted Belgian beer for the first time. He loved the taste. And he was drawn to the idea of “tank to tap” and the opportunity to make something great.

Back in Vancouver, Eli launched a successful law practice and started researching the craft brewery business. He found the ideal location for a brewpub in a landmark building in Vancouver’s historic Gastown. The good news was the building held a secret. It had a rare steam heat system that could be used to create steam powered brewing. The challenge was the moratorium on liquor licenses in Gastown. It took 14 months and a successful referendum but Eli is known for his tenacity and his efforts paid off. In 1995 he opened his one-of-a-kind Steamworks Brew Pub with a small portfolio of six craft beers.

And then he began pushing the envelope – focusing on taste as the hallmark of every one of Steamworks’ award-winning craft beers. As Eli says, “We’re the little brewery that grew.” And grow it did. In 2013, he built a full-scale brewery and taproom in Burnaby, becoming one of Western Canada’s biggest craft breweries and additionally, began exporting. Steamworks craft beer quickly became the local beer that resonates globally.

Look closely at Steamworks’ steam punk labels and you will find flying machines hidden in every design. They are a nod to Eli’s love of flying. He is a pilot who once soloed his single engine Cessna 182 from Vancouver to Europe and back.

And in a story out of fairytales, Eli and his Austrian cousin in Salzburg re-connected family and business two generations later and a continent apart. Working together, they have taken Steamworks craft beer back to Europe, where the idea was born.

Eli believes a combination of tradition, craftsmanship and creativity are the only means of success. It’s that belief that made him part of the first wave of craft brewing and that keeps him pushing the limits as a leader in the second wave today.

Where did the idea for your business come from?

Got the idea for a craft brewery by travelling through Europe and tasting Belgian beer for the first time. Loved the taste, the possiblitties and the opportunity to make something great.

Wake up and always first check the numbers from night before, I then read the New York Times, head to the gym and then to the brewery

By first believing in an idea myself. That way I can advocate for an idea and hopefully win over my team so they can execute.

Old tropes are dying, the market is expanding.

Working in stockroom of a large bus garage. Waiting for instruction from others, being idle was not for my personality/makeup.

Debt as leverage. Rather than taking on equity etc.

A restaurant out of synch with the consuming public. Overcame it through persistence, rejigging the elements until there was a fit. Took an extended stretch of solitude to figure out the 3 elements required. Doubled down on them and rebranded.

As a frequent traveler I have yet to find a healthy food in a hotel mini bar. Market opportunity for healthy light meals and snacks.

Ordering groceries online. Saved time, got what I wanted and some inspiration as well.

Facetime. Connecting at little or no cost around the world. Apple everything.

Spirit of St Louis. Not a business book but a story, teaches about tackling a seemingly impossible challenge.

Follow @steamworksbeer on all social accounts to see what Steamworks is up to!