David Lowe – Founder of Origin of Cool and Uberpong 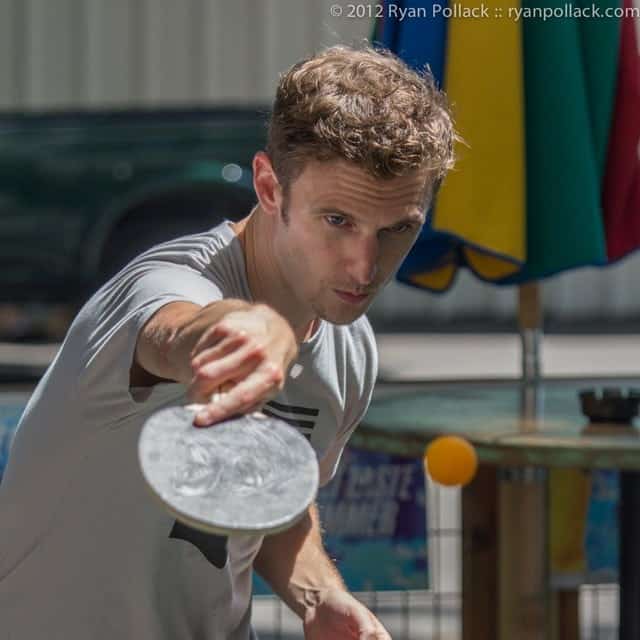 Always believe that somewhere, somehow, something will happen. You’ve gotta have a little faith in yourself!

David started life in the northwest of England before traveling around the world from 2005-2006. He taught English in Japan which enabled him to learn basic Japanese and more about the culture. He then went over to Melbourne, Australia, and led a door-to-door sales team. Why? As David says, “Because I had never really had a formal sales job and needed to know what rejection felt like so I could overcome it. I learned this fast with that job!”

On his return to the U.K., he worked in London for Superbrands Informa and Michael Page, but realized the corporate world was not for him. Following two business ideas that didn’t quite launch (Yumento, a group publishing website, and PopUp52, a pop-up shop that would allow new businesses to have commercial property for short periods of time), he tried his hand in a startup called ebuzzing (part of Wikio). While there, David launched WorldSportBloopers.com, which quickly got to the point where it was getting 30,000+ hits per month.

David was drawn to Austin, Texas, after hearing about SXSW. He visited there in 2011 and knew it was where he had to be. It was the perfect entrepreneurial ecosystem. He moved to Austin in February of 2012 and started work on Uberpong as a “physical extension of what Origin of Cool stood for.” His Kickstarter campaign launched on July 16th.

Uberpong, a Kickstarter project. Its mission is to change the face of table tennis by combining ping pong with art. We are aiming for $10,000, and at the time of this interview, we have reached $3,169. OriginofCool.com will continue, and we are always looking for contributors from around the world.

Where did the idea for Uberpong come from?

I was working in a startup in London. The sky was gray and I was daydreaming. I saw the table tennis table we had in the office and noticed two people from different companies meet at the table and start talking and playing. That was the light bulb moment: ping pong was a bridge between communities, but I had to find a way of making it more accessible so it could reach the mainstream.

I wake around 8:00 a.m., go through emails and get ready for meetings or calls at 9:00 a.m. I have always wanted to reinvent the workplace, so until we get funded, my office location varies between my home and a multitude of great coffee shops in Austin. I spend a lot of the day online and reward myself with a dip in the pool. I frequently hit networking events in the evening and then work until around 10:00 p.m. to handle loose ends from the day.

Dream hard! I always remember teachers and bosses saying daydreaming was bad. Wrong. The most successful people I have met daydream and even take siestas to relax their minds. Think of your mind as a muscle. Would you go to a gym and work your brain out for eight hours? No. So why do most people do this every day of their working lives?

I like to be in an inspirational place when I daydream, which usually means being by or in water. Once I have an idea, I try and take it as far as it can feasibly go. For example, if I were to think of a coffee shop, I would then start thinking of the location. Then I would take that traditional thought and mix it with unrelated things, such as a coffee shop with a ferris wheel. Then I would combine those with something ridiculous (this is an important part of the process!) like having pods on the ferris wheel go underwater for a few minutes. The end result might be far-fetched or even physically impossible, but I think that is great; It means you have allowed your mind to wander and have pushed your boundaries of possibility. With Uberpong, I do this regularly. The art paddles are just the beginning.

As cliché as this might sound, it has to be the ping pong trend. In Germany, the game is huge, and in Asia it has always been prevalent. It is exploding in the U.K. and is doing really well in several parts of the U.S. I want to lead the movement in Austin, Texas.

I have had a few, but the worst of the worst had to be when I was a runner in a post-production company in Soho. The shifts rotated so your body could never get used to the hours. I often worked from 11:00 p.m. until 7:00 a.m., and had to go out to companies to drop off cans of film. The post-production for Harry Potter was being done at this company, but the stinking, cold streets of Soho were a world away from the glamorous world of movies! I learned that sometimes, no matter how hard you work, you will never get to where you want to be. I realized that I could get experience from my time with companies, but that I would ultimately only be truly successful if I started my own business.

I would have started a business sooner. I put this off because I was brainwashed in school and thought I was a career guy; I spent years convincing myself this was the case. The fear of failure is embedded in us from a very early age, so to become an entrepreneur, you have to unlearn everything you’ve been taught, which is incredibly difficult–a discipline I compare to martial arts or the ways of the samurai.

I heard of an accident a few years back where two planes collided on a runway. A fire started in one of the planes. Most people were told to remain seated and not to panic. Most people didn’t question this, as they were being told what to do by people in authoritative positions. A few people took their chances and made their own decision to escape. They lived. The rest died. Another thing I recommend is to always think big. Why stop at your state line? Why stop with your country? Keep thinking bigger. It may take you a while to get to your goal, but it’s better to be always striving for more as opposed to hitting your ceiling early.

Appearing credible despite the fact that you are a nobody! I have been told I can’t do things (especially since I am new to the U.S.), but I always find allies or ways to get around these obstacles. Always believe that somewhere, somehow, something will happen. You’ve gotta have a little faith in yourself!

One I am in no position to create but would love to help succeed in any shape or form is a device that can strap around your wrist when you go surfing (or when you participate in any water sport). If you find yourself in a situation where you think you are going to drown, you’d bite into the wristband and it would give you just enough oxygen to make it to the surface alive. If surfers had this, there would be fewer deaths.

I would push initiatives that used repurposed materials (in the developed and third world). This could applied to housing, business and even medical buildings. There is so much waste (especially in the West) and people don’t realize how their waste could be used to benefit other countries and communities.

I want to be on Oprah!

“Losing My Virginity” by Richard Branson. Love him or hate him, after reading Branson’s auto-biography a few years back, my path was clear. I had to be an entrepreneur.

I was watching The Green Wing, a comedy series I describe as a funnier, weirder, British version of Scrubs.

Kenny Dalglish, an ex-player and manager of Liverpool Football (soccer) Club. He’s a genius on the field and a hero off it. He attended every funeral following the Hillsborough disaster in 1989.

How do you see the workplace changing in the next thirty years?

I see the death of the cubicle and the rise of the temporary workspace. People will be able to move around more freely, and thanks to cloud computing, they’ll be able to plug into ports that give them access to their information from anywhere in a building. Coffee shops will adapt and have startup zones where people can run businesses for the price of a few cups of coffee per day.

If you could go anywhere in the world right now, where would it be?

As long as I was unconscious on the outbound journey, I would say the moon! I have always looked at the stars and moon at night and dreamed about what it must be like to look down on planet Earth. I hope this happens in my lifetime.