David Siteman Garland – Founder of The Rise To The Top 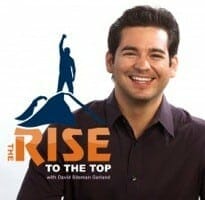 Entrepreneur, mediapreneur, entertainer, marketer, speaker and author David Siteman Garland is the Founder of The Rise To The Top, The #1 Non-Boring Resource For Building Your Business Smarter, Faster, Cheaper and author of Smarter, Faster, Cheaper: Non-Boring, Fluff-free Strategies for Marketing and Promoting Your Business (Wiley Publishing). He writes and hosts RISE, a web show for entrepreneurs, forward-thinkers and business owners as well as formally hosting The Rise To The Top TV show on ABC.

Besides being named one of the web’s “Top 60 influencers” by The Influencer Project, he has been featured on CNN, ABC, NBC, CBS, City TV, My Network Television, as well as on KMOX and in Alive Magazine, The Wall Street Journal, The Riverfront Times, Ladue News, and St. Louis Magazine. He has no idea why he has become a media magnet so early in his career, but he’s certainly not turning down interviews and requests for videos.

David also embarrassingly blushes and admits that he was recently selected as one of the 15 Male Blogger “Hotties” You Should Know About In 2011.

Continuing to do what I love. Interviewing interesting, unique people. Writing columns, articles and blogs. And always exploring interesting opportunities. I have a secret interest in being in a movie (either acting, producing, creating a documentary) and that is something I’ve started to explore a little bit.

I’m an action-oriented person. I try not to over-think things. Instead it is sort of an arousal scale. If it turns me on, I do it. If not, I don’t. What I usually do is quickly map out an idea and then get to work on it by tapping into relationships and connections. It is more of an art than a science.

I’m inspired by people who live passionately. Both at work and home. Especially creative people who have created a unique career or business around what they love to do. People who wake up and pinch themselves as to what they get to do everyday.

Chasing money instead of passion. I had success at a former business selling sponsorships. I decided to start an agency to sell sponsorships for other events and entities. It would have made a lot of money and was great business model. Problem? I wasn’t passionate about selling sponsorships all day for other people. So, I canned it even before it really picked up steam. Ended up being the best decision I’ve made.

Ideas are a dime a dozen. Action is what separates the pure dreamers from the people who actually do and are successful.

Linchpin by Seth Godin. A blank sheet of paper.