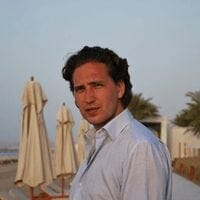 Dr. Max Niederhofer is the founder of Qwerly, a people search engine for the social web. Prior to Qwerly he was a Principal at Atlas Venture, a Boston- and London-based venture capital firm. He previously co-founded myblog.de, Germany’s largest blogging community and was a seed investor in Last.fm (acquired by CBS). Max Niederhofer holds a PhD in management science from WHU Beisheim School of Management in Germany.

Right now, Qwerly is a whois for Twitter. Type in a Twitter username and see what other social networks that person has a public profile on. It’s deceptively simple: there’s actually a lot of technology in the background.

I’m currently working on improving the algorithm (finding more and more accurate links), designing a few other exciting features that will extend the product and, of course, getting lots of feedback from people trying Qwerly out.

The boom in entrepreneurship brought on by free software and cloud computing.

Advances in neuroscience and evolutionary psychology.

The inevitable march toward the Singularity. Though I can’t decide whether the last isn’t just the geek nutter equivalent of the rapture. It’s an exciting thing to think about, though.

If I’d need a pick a short answer: my team. There’s no way to do this alone.

The long answer is I write out user stories first. I find that helps me reduce what I want to build into the simplest possible elements. Then I draw web pages, which I or my designer translate into wireframes in Balsamiq, Fireworks, Photoshop or directly in HTML.

Once every week or so we’ll have a planning session where we discuss which features gets added to the iteration backlog. After that it’s a matter of development, hallway testing, user testing/quality assurance, adding it to our staging server and deploying it. We run a continuous deployment process with several updates of our production site per day.

People who build something as an end in itself. People who reduce something to its absolute essence. Beauty in form and function. The point at which outstanding craftsmanship becomes art.

My top mistake is that I didn’t learn to program computers early enough in life. I think I would be more proficient now, had I stuck with it at age 10 or so.

What I learned from that (and many other mistakes) is good things come from discipline, persistence and hard work. See things through. Iterate and improve your product, but also yourself. Master yourself and you master the skill.

I think someone should build computers for the serious developer-designer-geek roadwarrior. The way Alienware did for gamers. Macs have had that position for the last few years, but Apple seems to be taking us down a different path with OS 10.7 and its obsession with an “integrated”, read: monolithic, ecosystem.

I think you could generate demand for a beautifully-designed machine that comes pre-installed with a choice of free operating systems, such as Ubuntu. Price points for a serious laptop can easily be $2,000-4,000 if you build something highly desirable. People will tell you that hardware is low-margin, that you can’t replicate Apple tech like the unibody, etc. But Michael Dell did it. And I think people will pay up if you get the design and components right. Not least because it’s a political statement to not on an Apple.

If you are serious about doing this, please let me help you get investors.

What is one book and one tool that helps you bring your ideas to life?

Spent, by Geoffrey Miller (Viking, 2009). Probably the best guide to learning about consumer behavior from the perspective of evolutionary psychology. This will shape your idea on how to market whatever you’re building.

A great software tool is WriteRoom, a shareware application for Mac that blanks out the rest of the screen to let you focus on what you’re writing.

We’re still on Step 1: collect underpants. But we think our API will have very interesting data. If you want free trial access, please email [email protected]

The Road, by Cormac McCarthy (Knopf, 2006). A tale of a father and son traveling through post-apocalyptic America, it’s both a beautiful essay on love, dependency and parenthood and a frightening vision of a future in which our ecosystem has collapsed. It makes you want to shape the future into something different.