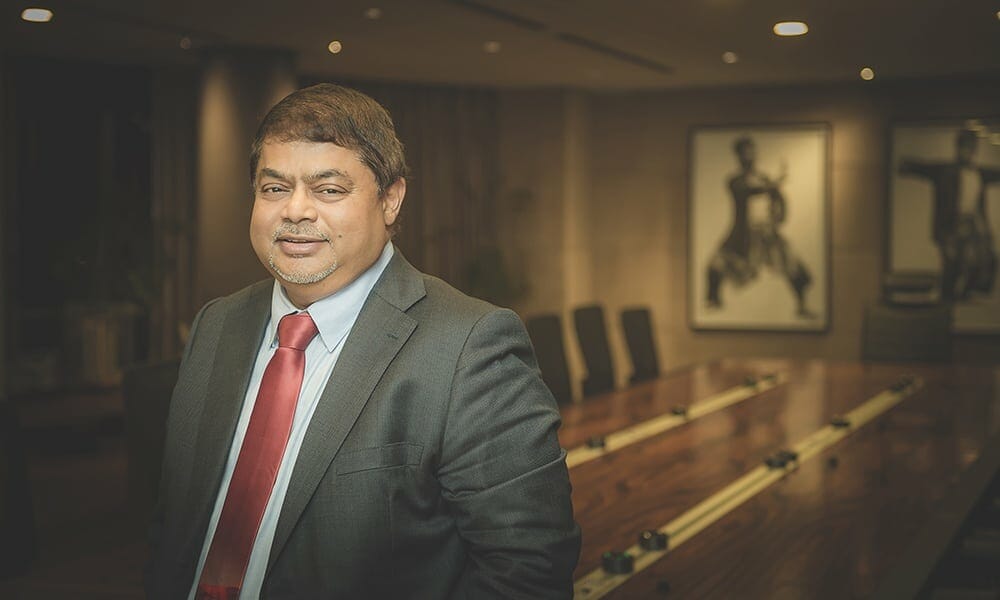 First rule, you cannot do everything yourself. In fact, the best managers had to learn to fire themselves. Everything you learned to become a millionaire, you have to destroy, if you want to level up.

Where did the idea of QI come from?

I don’t think anyone thought of QI when this adventure began. The bedrock of today’s QI Group was always QNET and the idea of getting into network marketing essentially came from my university days.

I went into my first network marketing presentation as a skeptic, very cynical as to whether this concept of networking would work. After a number of sessions and presentations over one year, I actually fell in love with it. Initially, I thought that this direct selling method was quite clearly something that could not work. And when I realized that in practice it did work, I started to analyze the business opportunity that networking brought from the viewpoint of an economist, where I looked upon this form of doing business as a solution for all economic woes across the planet, so to say. In fact, one of our biggest challenges in the modern world is employment. Employment as we know it has grown in its form over the last 100 years, but it will not be able to continue growing in the same form for the next 100 years. Automation is happening, computerisation is happening, factories are closing down. Not because we have stopped manufacturing but simply because we can manufacture without people. Assembly lines are changing. The factories of the future will be run by Artificial Intelligence. There will come a time, by 2030 perhaps, when we will have automated cars on the road. People don’t need driving licenses anymore. As it is, millennials these days don’t think about driving licenses. They Uber or Grab.

Having said that, the idea of creating entrepreneurs was something I was sold on from the start. The idea of this business came from my university days but the idea of starting the company that became the bedrock of where we are today came because I was tired of being poor and I just needed to start making some serious money.

On another level, my typical day begins with silence every day. Sometimes it’s an hour, sometimes three hours, depending on my mood and the place I’m in. I practice a fair amount of contemplation and meditation or mindfulness. I realized that if I don’t take control of the day, the day takes control of me. If I get up in the morning and start running, I never stop, so I’ve got to get up and slow myself down. Then I’m able to focus on things that are more important as opposed to urgent. The urgent things are always going to be there and taking my immediate time. But it’s the important things that make a difference in my life. This balance is what I strive to achieve every morning.

How do you bring your ideas to life?

The more people I talk to, the better. I don’t profess to bring ideas to life as a singular process and don’t do so in isolation. I could achieve more than half of what an idea requires but there is still 30% more that I need to complete it. An idea that is incomplete is useless, even if you achieve 90% of it. You still need that facet and that facet needs to come from somebody who is looking at it from a different point of view.

What’s the one trend that really excites you?

Disruption. We are a company that was born out of disruption. We began by believing that we can be global long before the advent of Alibaba, Amazon, and eBay. We all may have started around the same period but we took network marketing to a whole new level and we are clearly pioneers in that regard. We disrupted the whole pattern of thinking. We didn’t look at it as a national or regional business; we looked at it as global. We took away boundaries and delivered across the world. We made it e-commerce based. It was the first that anyone ever attempted to do it and took it to a whole new level by bringing both facets – e-commerce and direct sales together, with the element of MLM coming into play.

The sphere of silence. My silence in the morning. Because of that practice, I’m able to take a look at things differently. I don’t give up so easily, I don’t take no for an answer, and I have a different viewpoint on things. I don’t allow emotions to sway my judgement and allow the rational thought to prevail.

The other thing is consensus management. I believe in teams always. I never believed in working alone. If we are a sport, we are more football than golf.

Having a number of people give different viewpoints on a subject or idea helps me understand it better. Sometimes, I need to be sold on it.

What was the worst job you ever had and what have you learned from it?

I’ve had a number of worst jobs – security guard, gas station attendant, and cab driver. What did I learn from it? Never do it again! Having said that, arguably, my worst job was running a company for someone else and ending up being cheated. Looking back, I asked myself, “What did I do this for?” Later on, it turned out to be the best time of my life. That’s when I was trained to build this entire enterprise; that’s what brought me to where I am
now. If I didn’t go through that, I wouldn’t have been able to do this. I learned that in everything, there’s purpose.

I’m not sure that I would do things very differently. We would probably have to go through the process of gaining and losing people. There are no bad lessons. Just lessons that need to be learned. Everything I went through contributed in one fashion or another to bringing us where we are today. Had I known that I would be spending this length of time in this company, I would have taken more days off. I’m trying to learn and do that now.

As an entrepreneur, what is the one thing that you would do over and over again and recommend everyone else to do?

Keep pushing. The ultimate thing you do as a leader is become a nag; become like your grandmother. You have the best habits today because you were nagged into it. You brush your teeth every day before you go to bed – somebody nagged you into doing it for years. The same problem is there at any level of leadership. You really need to push people. You need to push them, pull them, and never give up on them. They will surprise you.

What is the one strategy that has helped you grow your business?

Duplication. First rule, you cannot do everything yourself. In fact, the best managers had to learn to fire themselves. Everything you learned to become a millionaire, you have to destroy, if you want to level up.

One duplication is the business itself, second is duplication of yourself. If you cannot be in every place, then you need to find 10 others like you. In order to find 10 others like you, you need to go through 100. You have to have a continuous mill of people coming in because you are going to lose 90 – they will leave on their own accord, get frustrated, get disappointed, and some will stop and return, but having said that, 10 will stay. You need that 10.

A good manager wants to do everything him/herself because that’s the way they know it can be done properly. So, one does not learn the art of delegation, which is the single most powerful art of all. We tend to relegate where we handover the duty to someone else and then go take a nap. The other guy would self-destruct. Delegation means you are doubling your workload, spending time working with someone, pushing them, and making them do it. You have to keep on doing it until they learn and you need to make sure the person starts to do it at the same level of competency as yours. That’s real delegation. When you have replaced yourself, then you can move on. You need to find that 10 people to replace yourself. That’s the strategy in duplication and creating a team.

You become attached to your results and you need to basically go beyond what you are doing. You have to recognize that you are not going to hit your successes right away. If you are going to prepare yourself for 99 failures then success comes anywhere in between. For the really unlucky ones, success comes at the beginning. If it comes so easily, you will never learn. When you are intelligent and talented, it comes to you too fast. If you take a look at the Jack Ma’s, Steve Job’s, Larry Ellison’s, and Sam Walton’s… look at the top 10 in Forbes, they are not necessarily super intelligent. If they are, they would be sitting in a university being an academic. They are practical, yes, they have common sense, yes. They are just ordinary people with extraordinary determination.

What books would you recommend to our community and why?

For those that are academically oriented, I would suggest The Borderless World by Kenichi Ohmae. He was an economist from Japan and was the advisor to (former Prime Minister) Mahathir. I was fortunate enough to have sat in his lectures in university. That’s heavy reading. I would also suggest Rich Dad Poor Dad by Robert Kiyosaki , The One Minute Manager by Kenneth Blanchard, and Building Blocks by Dexter Yager. I used to make every one of my networkers read Jonathan Livingston Seagull. It is a brilliant book, simple, easy enough to read. For networkers, it is the first book I suggest they pick up.

What people have influenced your thinking that might be of interest to others?

I called them the “M’s” – Mahatma Gandhi, Martin Luther King, Nelson Mandela, Mother Teresa, and also Vivekananda. They were people who shaped our world by choosing to live life in the most unique way possible. They’ve made a difference in many different ways. They believed in the concept of RYTHM – Raise Yourself To Help Mankind.

How do you manage the fear of trying something new?

Embrace it. It’s like bungee jumping, jumping off planes, skydiving, and so on. It’s scary to do till you do it. All fears have to be embraced in order to go on. I don’t bungee jump or jump off planes but I embrace new ideas. I recognize the power of new ideas. Things that I never thought worked, worked in our company and it took me by surprise many times. It’s not fear anymore, it’s anticipation. New ideas excite me.