Emily May – Co-founder of Hollaback 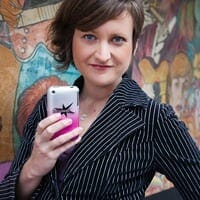 [quote style=”boxed”]First, I visualize what the world will look like with this new idea, and how it will create the change I’m looking for. Then, I work my buns off.[/quote]

Emily May is an international leader in the anti-street-harassment movement.  In 2005, at the age of 24, she co-founded Hollaback!, a movement to end street harassment, in New York City. The movement has since spread across the world, from Columbia, Missouri to Mumbai. As an expert on street harassment, Ms. May has been featured on ABC, MSNBC, NBC, NPR, and CNN and was recently selected as one of thirty “Women Making History” by the Women’s Media Center, along with Rachel Maddow and Nancy Pelosi, as a “ChangemakHER” by the Ashoka Foundation, along with Melinda Gates. Emily recently did a TEDx talk, and has spoken at a number of college campuses including New York University, Arizona University, Duke University, the New School, and Barnard.

Emily brings a fresh perspective to social action in the digital age. She argues that the internet has provided new opportunities to tackle discrimination, by transforming discrimination from a lonely experience into a piece of a larger, public movement. Her project Hollaback! gives women, girls, and LGBTQ individuals an empowered, real-time response to street harassment that will build public awareness on why street harassment matters, and how it hurts. Emily, who hold a Master’s Degree from the London School of Economics in Social Policy, argues that a crowd-sourced movement is the key to changing policy and minds, and ultimately, creating a world where everyone has the right to feel safe and confident.

I’m working on an initiative to engage people who witness street harassment happening – or bystanders. In about 15-20% of the posts we receive, people report having witnesses to their harassment who too often do nothing. It leaves them feeling “isolated,” “angry,” “crazy” and ultimately deepens the traumatization associated with harassment and assault. On the flip side of the coin, we’ve had such an outpouring from men and women who want to know they can do to help.

To fill these gaps – we are encouraging everyday citizens who witness harassment to provide support by asking the person effected if they are OK, and if there is anything they can do to help. We’ll start mapping these stories with green dots alongside reports of harassment which are currently in pink on ihollaback.org. We’re also hoping to make a short documentary that profiles a young man who intervenes when he sees harassment occur, and we’ll be making upgrades to our iPhone and Droid apps to reflect this new program. All this is of course pending funding through, so cross your fingers for us or be proactive and donate at ihollaback.org.

I wake up to an inbox full of reports, ideas, and thoughts from our site leaders around the world. If I’m lucky, I have time to go to the gym, and if I’m not, I grab a coffee and scoot off to the office. At the office, I’ll usually have 2-4 meetings per day: talking to legislators about the importance of this issue, talking to foundations about how our awesome outcomes can help them achieve the vision they seek, talking with fellow programs and potential partners, and talking shop and sharing hints with fellow executive directors. I also spend a lot of time emailing with our volunteer team, site leaders, and board, who are mostly all at their day jobs secretly making the revolution on their lunch hour. At night when our volunteer team and board get off work I meet with them, or I represent the organization at an event. I’m lucky if I’m home by 10, and then the day starts all over again.

First, I visualize what the world will look like with this new idea, and how it will create the change I’m looking for. Then, I work my buns off.

I am our only paid staff right now (we are a lean, mean, nonprofit machine) and our growth over the past year has been exponential. We have trained site leaders and launched sites in 24 cities, we have over 30 activists who are ready and eager to launch. At the same time, we have extremely limited resources and have had trouble pulling down funding from the usual suspects because our model is so atypical. In the words of two (very supportive and apologetic) funders we are “too innovative” and “need to wait for the world to catch up to us.”

I’m not that patient, and in the world of movement-building “waiting” is just bad business. Sojorner Truth wrote, “So I am keeping the thing going while things are stirring, because if we wait till it is still, it will take a great while to get going again.” Every time I get a rejection letter from a foundation, or a request to launch a new site that will stretch our capacity to the limit, I remind myself that a movement must keep moving. And I put my head down and figure out how to make it happen.

When we started Hollaback in 2005, we would get requests to start sites and we would give people a start-up packet and send them on their way. In the first four years, 20 sites launched, but at the end of it only three sites were active. What was the missing ingredient? Community. Now we have a growing, supportive community who have each others backs. We provide training, technical assistance, and a support environment – which when added to their love and dedication – is a world-shaking concoction.

Businesses that invest in social change garner more trust from their customers and ultimately do more business. A self-serving factoid? Maybe. But look it up, it’s dead true.

I mostly read articles that have been linked through on my twitter feed. It’s like a feed aggregated to exactly my interests.

I really loved Gloria Feldt’s “No Excuses” book. In it, she talks about when reclaiming the idea of power. Instead of “power over,” she talks about “power to.” It’s a pretty great principle to lead by.

Tungle.me. I used to always think it was ridiculous that politicians had a whole staff person committed to organizing their schedule. I mean, “scheduler,” really? Now I know why, but we can’t afford one. Luckily, tech came to my rescue.

What was the first milestone you reached when you knew Hollaback was going to work?

When Good Morning America called, we thought, whoa. We’re onto something. But then a funny thing happened – it just didn’t stop being amazing. Having been an activist since I was 15, I’ve never seen a more blessed project. Each day brings a new, incredible milestone. I just feel lucky to be in the middle of it all.

Where did you grow up?

I grew up in Richmond, Virginia. The strong conservative culture made life a world of contradictions for me. At the age of 12, I was president of the Future Homemaker’s of America at school. I also bought my first power-suit that year (an Amy Beyer original if you’re wondering), and wore it around the house daydreaming about becoming the first female CEO at PepsiCo. I didn’t understand the contradiction until much later in life.

At 19, I was perhaps the world’s first punk rock debutante. It was hard work trying to get all that black hair dye out before the ball, but in the end it was a blast to meet so many incredible girls who had so little in common with me.

Growing up in Richmond, you get up close and personal with ideas that you may not agree with, and you learn how to influence them. Still today, talking on conservative radio programs is one of my favorite parts of the job. Embracing these contractions is what makes Hollaback! tick. We are a sassy, fun, empowered response to very scary, isolating and silencing experience. We’re shifting culture, and we’re not leaving anyone behind.