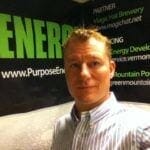 A few years ago I started a biogas company called PurposeEnergy (www.PurposeEnergy.com).  We developed a technology that takes all of the waste byproducts from the beer brewing industry and converts them to renewable natural gas, treated water, and organic fertilizer.  Our first full scale plant is at Magic Hat in Vermont.  Right now I am shifting gears from developing the technology at to growing the Company.

No such thing.  Every day is still new and exciting.  Today I pitched potential investors.  Yesterday I drove about 2,800 screws in the rain.  The day before I met with a business development prospect and learned about the energy and water quality challenges his business faces.  When days become typical, it is a sign that your start-up may be growing up.

I like the increase from 10% to 15% of ethanol in gasoline.  From a dependence perspective, this represents more than the amount the US imports from the Middle East.  From PurposeEnergy’s perspective, this means more distillers’ grains on the market, which erodes the value of spent grain as animal feed and improves the value proposition of PurposeEnergy.  It also seems to make NASCAR faster!  I like the trend toward natural foods.  It bothers me when I read an ingredient list and see a string of chemical additives that I can’t pronounce, let alone understand the health consequences.  Most importantly, I like the trend toward better beer varieties.  When I was a kid there were several beers on the shelf, but they were all the same American Pilsner style.  Now you can go to the corner store and pick from a dozen different styles a quality beer that will compliment your evening dinner.  That is evolution.

Watching my children soak up knowledge.  I want to help them become the best people they can be.

I took a job for the money once.  After a few months I realized that the job made me miserable and it wasn’t worth the money.  That is when I first understood the saying “Find what you love to do.  Figure out how to get paid doing it.”  Ever since then I have focused more on the job opportunity and less on the salary.  Now look – I get to work with renewable energy AND beer.

The best example of energy storage I can think of in practice is a hydro dam.  When energy prices are low they buy power and pump water upstream.  When energy prices are high they flow water downstream to produce electricity.  Can the same principle be applied to municipal water storage?  Here is another freebie:  How many people have a beer fridge in the garage?  I do.  In the winter time I unplug the fridge to save energy.  Unfortunately it can get cold enough in the northern regions to freeze the beer.  That is why I connected the light bulb in my fridge to a thermostat control.  When the temperature approaches freezing, the light kicks on and warms up the inside of the fridge.  The fridge is insulated enough that a 60W bulb works fine.  Maybe somebody could market the ultimate beer fridge with this feature?

The only thing I read every day is email, and for the life of me I can’t figure out why?  During baseball season I also read the RedSox box score.

I just ordered Neil Senturia’s recently released “I’m There For You, Baby: The Entrepreneur’s Guide to the Galaxy”.  Learn to win from a winner, and Neil is a pretty successful serial entrepreneur.  He is also a little rough around the edges, so I expect the lessons to be entertaining.

I converted from the Blackberry to the iPhone.  We now have a really cool iPhone app that controls our biogas plant, which means we can monitor and control it from anywhere.  Brilliant!

MIT Professor Ed Crawley is a serial entrepreneur that would be a good read.  I think Ed is on his fifth company and all of them have been in different spaces.

What is your favorite beer?

Homebrew of course.  In the fall I make this beer called Chinook Pipeline.  The grain bill is like a double IPA, and I overdose it with the Chinook hops that I grow on the north side of my garage.  I just acquired a couple of used Jack Daniel’s whiskey barrels that I want to age a smoked porter in.  That will either be my new favorite homebrew or it will be so bad I will have to feed it to the biogas plant.