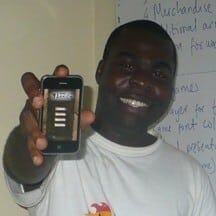 Eyram Tawia, a resident of Ghana, is the product of the Kwame Nkrumah University of Science and Technology in Kumasi and the Meltwater Foundation. At the Meltwater Foundation he was a Teaching Fellow, inspiring others and also working on his projects. Eyram’s love for comics and computer games helped to spur his interest to learn to program. He wanted to make the comics he drew as a youngster come to life on the computer screen. He designs and implements games in whatever programming language that he believes will effectively get the job done.

Eyram is convinced that Africa will make a salient contribution to the world of online games.

A multiplayer game framework that works with the lowest bandwidth, on-top of which our Massively Multiplayer Online (MMO) games will be deployed. The first game being deployed on this framework is Street Soccer.

Mobile trend
I’m fascinated about how fast the mobile phone has penetrated the African market. The most exciting part is the ability for illiterates to differentiate an old phone from the new one and upgrade. This is really wonderful! Because very soon, all outdated phones will be out of Africa and we developers can confidently write apps in rich languages freely for people who can neither read nor write.

Internet trend
Gone are the days where only one telecommunication company owned the gateway to freedom. About six years ago, the Internet was the most expensive channel of communication. Now it’s the cheapest. And telecommunication companies are able to provide the best and the cheapest service. This trend is the most exciting since it’s something I really appreciate as one of the best things that has happened to our civilization.

Service trend
This trend is the slowest but I know in the next two years, a lot of services will clutter the data space of the telecommunication companies since our business also targets it. So far, some really cool services like the mobile money, video calls, multimedia messaging services (MMS) and content downloads have been introduced which I think its a good step. I expect to see music streaming services, video gaming and other value added services being deployed soon.

Hmmm…sigh… I just do them. Ever since I was a child, the strategy has been the same. I think of an idea, and then put in all it takes to make it happen. I wanted to make a robot, I thought of it, gathered whatever local resource I had available, and then build it. It was the same for other toys I built as well. At this stage, most of the ideas were not to make money but to just try them out to see whether they worked. Trying out one idea leads you to another that is even better. If you don’t try, you’ll end up marking time. I used what I could find around me – empty milk cans, paper cards and existing circuit boards and parts from other toys I destroyed. I also used books and like-minded friends to validate my ideas before trying them out. Those were my ‘invention ambition’ days but things got more structured as I grew up and entered the software development space.

The idea of making a game has been with me since infancy. I remember I used to meet with my team to plan the story on paper, level and technicalities of the game before we implemented. Though most of it became adhoc, I think the basic idea of planning was working then. We spent several hours trying to accomplish what was in our young minds and did all it took to get it working. So the underlying factor is to try your best to pursue your idea and be passionate about it.

One thing that inspires me is the politics in the complexity of game design. Africa is forgotten totally and not considered to be capable of making quality video games makes me passionate every second.

Game design is a totally lucrative industry that can work in Africa. I really want to show Africans the only professions aren’t the traditional ones like medicine or law. Computer science isn’t just about making banking, and hospital management applications either. There are other aspects that are more fun and challenging – like the multimedia sector: games, music applications and robotics. So I really want to create a new industry altogether in Africa.

I’ve made several mistakes but one that I regret very much is how negligent I was toward business during school and my time in my second company Blacksoft.

A chunk of talent and time went into just facing the challenge, but I was totally negligent about the money aspect of the company. I learnt alot from all the geeky stuff we did. We built very unique and complex products at Blacksoft, but we were all geeks concentrating so much on tech and the complexities. I, for one, was not thinking about the money at all. We had one sales/business guy who I feel could have made more impact if we were also business minded.

One thing I’ve learnt is that no matter how much talent you have, you need to make something of it or else you make nothing. I see this as a mistake, though others might not see it that way, since we did try something unique. But you definitely need a good skill-set balance in your team.

As a businessman, none! But as a true citizen of Africa, I think I can share one ambitious idea I’ve been thinking through for sometime now. Looking at the social media and mobile trend, I been thinking of a way to hook up market women, hawkers etc since they all have mobile phones. I’d like to build a biz idea around that and see the best way to make use of these people using social media. I suppose most of them can read basic SMS and text so that is the channel I’ve been thinking about for a while. It sounds a bit dumb but, since these guys have the device, why can’t we make them enjoy social media and make some money as well?

Book: Art of the Start: Guy Kawasaki – This is a really good book for startups. It shows you the basic principles and rules to follow.

I’d love to see the CEO of Meltwater, Jorn Lyseggen, interviewed. He’s a really passionate personality who is making a great impact in the world and has a really good plan for entrepreneurship in Africa.

Where do you see Leti Games in the next five years?

We intend to grow Leti Games into the company where all creative and well skilled game developers in Africa will work in the next five years. We will truly build a new avenue for wealth generation for our continent through games. Leti Games will be run by local expertise and compete globally. It’s a dream come true for me and I think I’ve found my place in life. So we are looking for new talent and grooming people in the profession… starting NOW!

How do you balance work and personal life?

This is a tough one. I’m very bad at this but getting better now. We need to appreciate the fact that, as much as we want to see our ideas flourish, we do
this to enjoy life which is mostly friends, family and hobbies. Without these, life becomes meaningless. So I try to now factor all these in my tight schedule aside work and spend enough time with loved ones as well. It’s hard to do but I think it is equally necessary.

This interview was scouted by TheIdeaScout.com, a group-edited publication, with a mission to scour West Africa for the most innovative and promising ideas, concepts, and ventures that appear well positioned for regional or international adaptation, expansion, cooperation, investment or partnering.