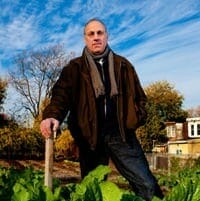 Skip Wiener has a master’s degree from Temple University in Plant Physiology (1967) and a master’s degree in Landscape Architecture from the University of Pennsylvania (1972). He worked for the New Jersey Department of Environmental Protection, the National Park Service, the Montgomery County Planning Commission and John Rahenkamp Consultants as a landscape architect/regional planner. In 1989 he started the Urban Tree Connection (UTC), which initially developed community-based environmental programs in Chester, PA and did extensive work with the Philadelphia School District creating neighborhood service-learning projects with students. UTC became a nonprofit in 1997 at which time a community-driven open-space revitalization model was initiated and now is flourishing. UTC creates and maintains urban gardens and farms in West and North Philadelphia, offering after-school programs, training and employment opportunities for teens and adults, safe green spaces in the community and fresh produce to neighbors. It transforms blighted, abandoned, crime-ridden lots in Philadelphia’s poorest neighborhoods into urban gardens and farms and opened the city’s first low-income CSA (community-supported agriculture) farm in West Philadelphia in 2010.

In 2010, Urban Tree Connection started the City of Philadelphia’s first low-income community-supported agriculture (CSA) farm in West Philadelphia on an abandoned property. In the first season, we harvested more than 100 pounds of produce each week, which was distributed in the community. We are currently finalizing the plans for our first official season as a CSA offering shares to approximately 20 families in the neighborhood. We are determining final details like the planting and harvest schedules, as well as planning our weekly farmers market at the site. In the fall of 2010, Urban Tree Connection successfully petitioned Philadelphia’s Court of Common Pleas to be the legal conservator of the 3/4 acre parcel, under Pennsylvania’s Abandoned and Blighted Property Conservatorship Act of 2009. The new conservatorship of the new CSA is very exciting for Urban Tree Connection.

1. Using new laws to become the legal conservator of abandoned properties in an effort to transform blighted, crime-ridden areas into urban gardens and farms.

2. Addressing a major problem in urban areas: the lack of fresh produce for families from the lower socio-economic levels.

3. The desire for people to obtain produce that has been grown locally.

My motto has always been, “Keep your nose to the grindstone.” It may sound cliche, but hard work and determination is paramount to success. Having amazing employees and volunteers is important, as well.

The children and adults in the communities of West and North Philadelphia where Urban Tree Connection creates and maintains urban gardens and farms inspire me. Our hardworking and passionate volunteers (more than 700 in 2010 alone!) also inspire me.

I started Urban Tree Connection in 1989 but didn’t formally file as a nonprofit in the Commonwealth in Pennsylvania until 1997. I wish I filed sooner.

Organizing neighbors to transform abandoned, blighted properties in urban areas provides safe, green spaces for adults and children which benefit the larger communities. Growing produce in these areas can allow for a revenue stream to support the urban farm. Be sure to speak with an urban farming expert before you begin, as it is paramount to understand how to safely plant and grow produce in cities.

What is the most important life lesson you’ve learned?

Big systems are not the answer!