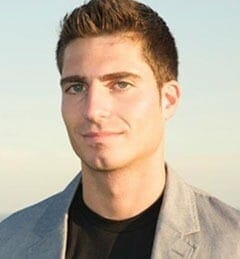 Geoff Lewis is the Co-Founder & CEO of Topguest, an early-stage technology company that is redefining loyalty program engagement for a mobile, social world. Founded in June, 2010, Topguest has thus far been adopted by loyalty programs with a combined reach of +170 Million members.

Topguest powers social loyalty for many of the largest established programs in the world, such as Hilton HHonors, Priority Club, Caesars Total Rewards, Virgin America Elevate, and many more. The Company is backed by notable Silicon Valley venture capital firms, including the first investors in Facebook.

Prior to his entrepreneurial endeavors, Lewis was the Vice President of a macro hedge fund, and began his career in Global Brand Management at Procter & Gamble. Lewis has appeared as an expert commentator on CNBC Power Lunch, MSNBC Your Money, TechCrunchTV, and on Canadian television. He’s been a keynote speaker at events such as The Web 2.0 Summit,  Gamification Summit, TechCrunch 50, and EyeForTravel. Lewis mentors other young entrepreneurs for Founder Institute and The Brandery, and is a regular contributor to The Business Insider.

Creating personalized social loyalty programs for people based on their favorite rewards currency and favorite merchants.

There’s no such thing! That’s one of the best parts of entrepreneurship – Each day brings the unexpected. That said, I’ve recently started following a rough daily framework that seems to really be improving my productivity. During the week, I try to get up at around 7:00am and head to the gym. Later in the morning, I have a quick daily coffee meeting with my 2 co-founders, Ash and Ozan. We use this time to discuss priorities, work through any problems, and make decisions. I then write down the 1-3 things that I *must* achieve on this specific day. I configure my day around these priorities to ensure I get them completed before leaving the office.

Disruptive health-sector startups: Health is a massively inefficient sector, and it’s encouraging to see startups tackling important health-related problems gaining traction. ZocDoc, PracticeFusion, and  Lollihop are a few that I’m a fan of.

Crowdsourced funding. Kickstarter is now well-known, but I think we’ve only scratched the surface on applications for crowd-funding.

It takes a village. The support of an exceptional and committed team is critical. It’s easy to come up with an interesting idea. It’s very hard to transform an idea into a viable product that resonates with customers. Topguest would not exist without our team.

Hard to pick just one… Probably the biggest was spending a few years too long in corporate america before jumping into entrepreneurship. I’ve learned that if you’re afraid of failing at something, it’s a sign you should try it, right away.

A marketplace for short-term employee-swaps between non-competitive companies.

Hacker News – It has the most insightful commentary on the most important news in tech.

What’s been the real secret to Topguest’s success?

What’s do you miss most about pre-startup life?

Travelling for pleasure to far off places. There just isn’t time for long trips when you’re leading a startup. 2-3 weeks away from the office isn’t a good idea.