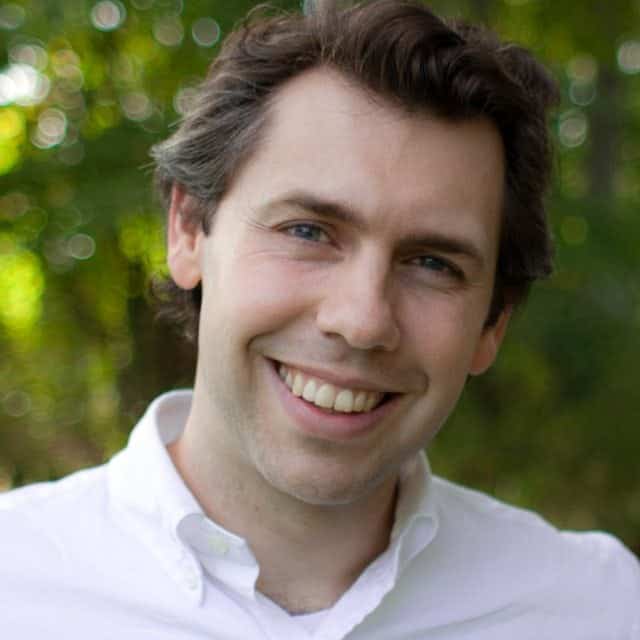 [quote style=”boxed”]Ask questions as if you were your own worst critic. If you can’t sell yourself on an idea, then you shouldn’t try to sell others.[/quote]

Gerard Murphy is the CEO and Co-Founder of Mosaic. Gerard has over 10 years of sales and marketing experience. In addition to his Babson College M.B.A., he has been the lead sales and marketing guy at several Boston area startups. Prior to Mosaic, he worked at a marketing automation startup that went from four employees to the “Inc. 5000.”

Murphy has been honored to judge many entrepreneurship contests for Babson College and other organizations in the Boston area. He is also a board member on the New Hampshire High Tech Council. He lives in Nashua, New Hampshire with his wife Elizabeth, daughter Caroline and son James.

As I write this, it is Labor Day Monday, before 7:00 a.m., and I am somewhere over Pennsylvanian on my way to Las Vegas for a trade show. The truth is that I am super-energized, excited and awake. This is our first major event where we are exhibiting. We have received a lot of press recently and have been experiencing a little bit of that hockey stick growth curve we hoped would happen.

We have had our first product in the market for about nine months. It has been selling well and growing each month. We launched our second product exactly a month ago today. This freemium product was always the key to our acquisition strategy. Holy smokes, it’s working! I am off to this trade show called Photoshop World where we hope to make a big splash.

Where did the idea for Mosaic come from?

Mosaic Co-Founder Andy Young and I have been friends since seventh grade. So for 20 years, we have been bouncing ideas around and getting into trouble. During that time, we both developed a passion for photography. We both starting having large collections of digital photos.

In November 2010, Andy and I went out for a beer. We started talking about what a pain it was to manage our photos, including backing them up. We discussed how we wanted a cloud service to make this process more secure, easier and more accessible. Andy said “I think we could do this.” In March 2011, we became a legal company and six months later launched our first product.

I’m an early riser, so I am usually in the office before 6:00 a.m. This works for me as I have two small kids at home. I like to have dinner with my family, so I tend to leave around 5:30 p.m. I usually check email after the kids go to bed and I’ve had my quality time with them.

We run pretty lean, so I wear lots of hats. On a given day, I handle the finances and the marketing. I also oversee the product road map with my co-founder Andy. I am obsessed with marketing experiments, so I tend to add or subtract something to our website everyday. I also still handle some direct sales and customer support. It is very important to me to hang on to this as long as possible, which is getting harder. I think the more I can know our customers and the issues our customers face, the better a company we will build.

We talk about the concept of the Mosaic “lab” often. All startup people rely on their guts; you have to. But I believe smart startup people recognize their assumptions, test them and react to those tests as quickly and inexpensively as possible.

I often play devil’ advocate to my own ideas. I often say, “Let me sleep on it.” When I am driving or alone in the office in the morning, I refine my ideas with a little time. I then like to talk them out with others and present my own pros and cons. Andy tends to journal more than me, which he finds helpful. I wish I had the discipline to do this more.

The trend that gets me excited is the explosion of digital content. I look at my baby books and those of my parents, and they have a couple hundred photos that represent their entire documented childhood. A lot of parents today take this many photos each month! I take almost as many photos of my kids each month as my parents saved from my entire childhood. (And my parents were great about creating these albums.)

There is a new problem of finding the good and great photos when they are buried thousands of other files. This is one of things we are working on here at Mosaic.

I have been lucky in my career to have had many great jobs. I have worked at successful and unsuccessful startups, and I have learned a lot from both. I was also the Caribbean Sales Manager at age 23 for a small educational company, which wasn’t too bad. One memorable job was working as a hay farmer for a summer when I was 16. I spent a lot of time lifting bails of hay.

I would have waited a little longer to quit my full-time paying day job. Don’t get me wrong; we actually waited a long time. We had a product in market and revenue before we made the leap. But in hindsight, I could have held out longer.

Ask questions as if you were your own worst critic. If you can’t sell yourself on an idea, then you shouldn’t try to sell others. When you think of an idea, try to rip it to shreds and find each hole before implementing it. Anticipate other people’s rejections and make sure you believe your own responses to them.

In some of my jobs, this has gotten me in trouble. Some bosses thought I was being “negative.” Talking about the bad points of a boss’s new plan to them in a meeting doesn’t always make them very happy. In reality, I was trying to think like a pessimist so I could be more optimistic about the results. I am very optimistic by nature. This balance between known risks and unknown successes is where entrepreneurs live.

We had a couple early product missteps at Mosaic. We recognized that the features we developed were too complicated to be implemented by most users. We recognized this early enough that we could pivot.

I think one of the hardest things is having just a little bit of success. Sometimes this can give you false hope that you are doing well. Although the product had a little success, we decided for a more dramatic change, and this has led to much more growth.

Please, someone start a company that helps me find things while driving to where I am going. For instance, if I want a cup of coffee between my house and work, I don’t want to search for coffee places in my immediate radius; I want to search for one that is the shortest detour from my intended location.

If I look for a place to eat while driving on the highway, most of the destinations are behind me or way off the highway. I want an app that says there is a good local place four exits up on the right. If someone doesn’t do this, eventually I will.

World peace… Sorry, I just wanted to answer like a Miss America contestant.

I would like for people to have more respect for the environment. We need to live on this big rock, so we should take care of it. I wish I knew a way to tackle this as it is a huge problem. I could see myself moving into a non-profit roll later in my career.

I think I might have won an award for being the world’s worst waiter when I was worked at a restaurant in college.

I am into photography, so I love Kelby Media Training and FroKnowsPhoto. I also enjoy a good TED Talk.

I really enjoyed Freakonomics by Steven D. Levitt and Stephen J. Dubner—showing the economic underbelly of everything. Making some outlandish arguments and then refuting them. It is a fun and powerful read.

My wife and kids make me laugh out loud a lot. The last time I really belly-laughed was really one of those “you needed to be there” moments because writing it down would sound really lame.

I am lucky to be surrounded by extraordinary people. From my wife to my parents, grandparents and in-laws, I have no shortage of people to look up to.

If I had to choose a famous person, it is Bill Gates. Here is why: the guy was a driving force behind the single greatest technological revolution in our lifetime. He democratized the computer in a way no other person did while running an incredible successful business. But here is the thing: he is a really good dude. He has given away tens of millions of dollars to amazingly innovative and worthy causes. He is guy worth looking up to.

Who should start a business?

Anyone who takes great joy out of creating something out of nothing. You need to have a strong stomach for failure and deal with uncertainty, but other than, that you need to like to create something in an unstructured environment.

What is one thing you wish had you more time for?

I have two kids, a large close family and am running a business, but I wish I had more time to exercise. I recently started doing the “Insanity” workouts out with my wife, and it has felt good to get back in shape. I just feel better when I work out regularly.