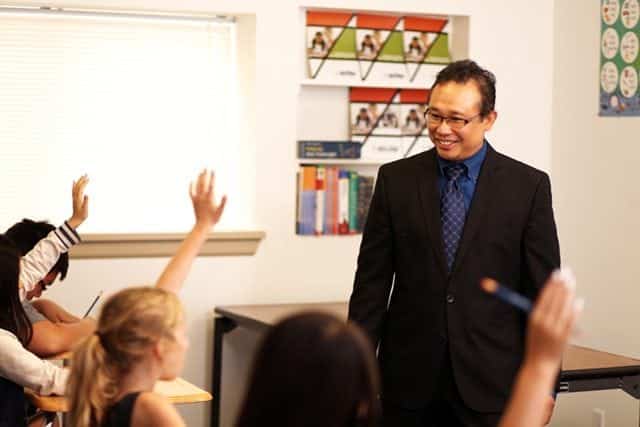 Hao Lam, chief executive and chairman of Best in Class Education Center, has spent his entire career as an advocate for supplemental education, both as an instructor and business owner in Best in Class, and even before that as his friends’ go-to math tutor before crucial exams in high school and college. As a teenager, Lam fled his native Vietnam in 1988 to escape political persecution from its Communist leaders and made his way to Canada, where focusing on his own education and teaching his peers drove his immigrant success story. He worked adamantly to learn English, and proved so adept at teaching others math that he soon was riding his bike from house to house after school to help classmates understand difficult concepts. Soon he had mastered English as well and graduated high school with high marks across the board. After earning his bachelor’s degree in mathematics from the University of British Columbia, Lam moved to Seattle to reunite with and marry the woman with whom he escaped Vietnam, Lisa Lam, and begin his education career as a licensee for an existing tutoring company. The Lams expanded that one center beyond just tutoring to include other kinds of enrichment programs and test preparation services, which enabled them to grow into multiunit licensees. Between 1995 and 2013, Lam opened 11 company-owned education centers in Greater Seattle and facilitated the opening of another 14 franchised centers across the nation. In 2011, the Lams acquired the brand as sole proprietors and renamed it Best in Class Education Center. Today, under Lam’s leadership, Best in Class engages students to learn via a specially developed curriculum and to develop their critical-thinking skills vital to succeeding in a 21st century economy. Lam is actively recruiting franchise partners to expand Best in Class in 46 states. He and Lisa live in Seattle with their two sons, Louis and Albert.

Where did the idea for Best in Class Education Center come from?

I have always been passionate about learning and teaching. When I was attending high school in Canada, I tutored my classmates in Calculus and my services became really popular. I ended up with evening test-prep classes packed with other students eager to hear my advice and tips for passing their provincial exams. This was when I realized my passion was in teaching and helping other people achieve their academic goals. After I graduated from UBC, I found an opportunity to become a licensee of a tutoring center in Seattle in 1995. I packed the few belongings I had into my Nissan King Cab truck and I headed for Seattle. After my wife, Lisa, and I opened our center, we quickly expanded our services from just tutoring students that wanted to catch up to developing our own curriculum for students that wanted to zoom ahead of their class. Then we added college test preparation and by that time we had people talking about us. We opened one center after another as our students and parents continued to spread the word and I realized we had something special here. In 2011, I became the sole proprietor, began franchising and changed the name of the company to Best in Class Education Center. We have grown year-over-year and now have 11 corporate centers and 17 franchise locations nationwide.

Every day varies, but I find I’m most productive when I stick to a schedule. I start my day at 6 a.m., whether it’s a work day or not, and I always begin my day with exercise and a half hour of reading. I try to maintain a good balance by making time in the day for my family; regardless of what my day looks like, I always make breakfast for my sons and help get them ready for school. Family dinner at the end of the day is really important too. As for the work day, I set an agenda for myself and place focus on the priority items that need to get done that day. At the end of each day, I evaluate and also take a look at what my agenda for tomorrow needs to look like, based on what I was able to accomplish today. Between taking care of things at the corporate level and making sure that I can provide adequate support for my franchisees, the only way to fit it all in is to have a schedule and stick to it.

I have tons of ideas all the time after I read! I write them all down and go over with my team when we have our weekly or monthly meetings. We implement some good ones, get rid of some impractical ones and file others to implement when the timing is right.

I am super excited about the growth of our company. We grew over 20% each year in the past 3 years and the trend is going to be steeper in the next 3 to 5 years. Our goal is to hit 100 centers or more within the next 5 years and I think we can do that fairly easily because I have a strong and focused team, and with the right people goals become attainable. We provide a franchise opportunity that people are really passionate about; our key selling point is that we provide a part-time job at full-time pay if that’s what our franchisees desire, and they can of course work as much as they want too. We’re building a network of passionate, education professionals and when people learn about the opportunity with Best in Class, they’re enthusiastic about being a part of it.

Reading! I read at least 30 minutes each and every day. My reading includes books and some of the entrepreneur sites. I learn and grow my business every day by trying to learn from other people who have had similar aspirations and experiences in trying to make them happen.

I am a very optimistic person and I don’t think I would say any job I’ve had was “the worst of my life.” I put 120% of my energy into whatever I’m doing; even when I was washing dishes at a restaurant after a long day of school, I was committed to it. My greatest satisfaction comes from exceeding peoples’ expectations and every job I’ve ever had has helped me continue to become better at that.

I would focus on one thing and one thing only. In the past, there have been points where I was doing several things at the same time and I thought I had the energy and could multi-task very efficiently. I was completely wrong. My most productive years are the years that I have been laser-focused on one venture.

Never stop learning. I read books and news, I have a business coach, I attend business seminars and meetings, and I also join professional groups. Learning is a lifelong process and you can’t grow if you don’t listen and learn every day.

My strategy is very simple: discuss any major decision with my team. The only times that I’ve made a mistake in my business were times that I did not listen to my team. Some of the lessons I’ve learned have been the hard way. Today, if there’s a major decision to be made we split our team in half. Half the team will be in support of the project and the other half will be against the project and we debate. After we make the decision, we support the winning team and we never look back.

I invested in a restaurant business before and failed miserably. I was one of the silent investors and I watched the company grow to multiple restaurants without a support system, and the whole thing collapsed; all of the restaurants had to close. The lesson that I learned from this failure is that you can never scale up a business without a solid system and a great team.

Take the middleman idea/approach of Uber or Amazon and make it industry-specific. For example, a website connecting people who need their lawn mowed and people/companies who provide the service. An app that easily connects people with whatever their necessities are.

I finished high school in Canada when I was 23 years old and I earned my bachelor’s degree when I was 27. I was a refugee from Vietnam and I started learning English when I was 20 years old while I was living in the Philippine refugee camp. I have faced extreme adversity at times, but these experiences have shaped me into the person I am today.

Trello is the collaborative software that we use within our team. This is a great communication tool for a small organization. It has everything we need to organize projects, share ideas and assign and track tasks to team members.

Verne Harnish’s Scaling up: How a Few Companies Make It and Why the Rest Don’t is the must-read book for entrepreneurs who want to grow and scale up their business. There are tons of tools and techniques in Verne’s book that help you stay focused, set priorities, build more effective teams, and grow your company.

Howard Schultz and Steve Jobs are my two idols. I like how they left their companies for years and then came back and turned the company around. They were visionary leaders and were willing to try new things without fear of failure. I have read Onward by Howard Schultz and Steve Jobs by Walter Isaacson over and over again and I can easily learn something new every time I read them.