Please Retweet. How To Get 1000+ Retweets 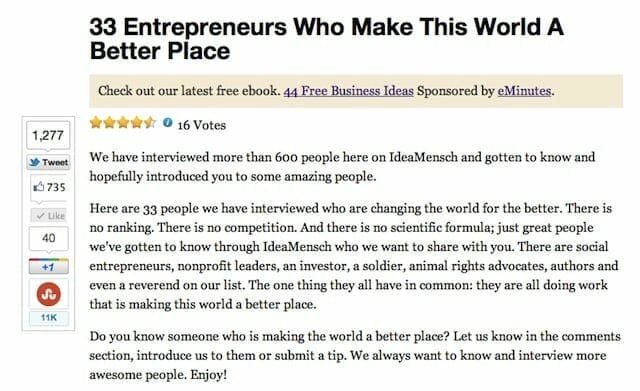 Today I am going to give you a detailed run-through of how to get 1000+ retweets – based on a post we published last week that actually has gotten 1,277 so far.

If you are a regular reader of IdeaMensch, you probably know that most of our interviews don’t exactly go bonkers on Twitter. One of the reasons for this is that I am not willing to conduct them in a way that leads to tweetalicious headlines like, “How Joe Schmoe Went From Zero to $7 Million Dollars Working in His Grandpa’s Speedo.”

There is nothing wrong with these kind of headlines (this post’s headline barely beat “How To Get 1000+ Retweets in Your Grandpa’s Speedo” in A/B testing), but I like the value that we get out of our current interview format and I think it creates a nice piece of everlasting content for our interviewees. It’s sort of like being Time Magazine’s Person of the Year, except you’re more like the person of that specific morning or afternoon, and to a much smaller audience.

One of my goals this year is to post a weekly piece of high-quality, long-form content that hopefully will be as relevant a year from now as it is today. Last week I published that first weekly post, and since sometimes people give me crap about IdeaMensch interviews not getting enough Twitter love, I made it my goal to experiment and try to get a bunch of people tweeting about the post. Considering no IM interview has been retweeted more than 100 times, I thought 300 retweets would be an awesome number to try and get. So add this Twitter goal to my list of usual priorities, which are to produce high-quality content that makes our interviewees look good (or smart, which some people prefer), gets read and is useful to a lot of people.

As I am pressing publish on this post, we have gotten 1,277 retweets–way beyond my expectations. The post has also been liked 735 times on Facebook, got +1’d 40 times and was stumbled 11,000 times. I don’t read Mashable, so I can’t tell you if this is good or not. And just to complete the picture, the post was read by about 21,205 people of which 105 made the extraordinarily smart decision to subscribe to our email newsletter and make themselves 44 Free Business Ideas smarter.

Anyway, since I am not one for secrets and IdeaMensch is all about helping others bring their ideas to life, here is exactly what I did.

The post was titled 33 Entrepreneurs Who Make This World A Better Place. In regard to content, I really liked the idea of producing something that would make our interviewees look good (or smart). So I sat down with my girlfriend and got into at least 3 lively discussions about who among our 600+ interviewees should make the list. FYI, I only wanted to feature people who’ve been interviewed on IdeaMensch. Not because I am shortsighted and small-minded, but rather because I am biased and loyal to the people who’ve taken the time to share their wisdom (or good looks) with our community.

As a sidenote, making 33 other people look good had the added benefit of getting approximately 33 other folks to be as enthusiastic as me about sharing this post.

Conincidentally, the post was about 3,300 words long and probably took a good 10 hours of work; some of which probably could have been outsourced.

Rumor has it that Stumbleupon is a great way to spend a few advertising dollars as long as you’re driving people to great content. You pay Stumbleupon a few dollars, they do some suggested stumbling of your page and if it’s great content, you’ll get a bunch of free organic stumbles out of it. I spent $50 total on Stumbleupon ads over 5 days, which amounts to something like $10 per day. I left all the targeting to automatic, as I: a) was too lazy to mess with the settings and b) didn’t know what I was doing anyway.

As of right now, I paid for 543 stumbles and got an additional 10,557 stumbles for free. My campaign stopped running on Saturday and I am still getting about 1,000 organic stumbles per day.

By the way, and I was surprised by this – Stumbleupon is also driving quality traffic as folks are staying about the same length as the site’s average and are taking a similar amount of actions.

3. Use Fiverr For Social Proof

When I played competitive soccer in Europe (I was about 12, just wanted to say that I played competitive soccer in Europe), by far my biggest skill was not actually a skill. It was that I did whatever it took to win. Today, that translates into the fact that when I set myself the goal of getting 300 tweets, I am going to do whatever it takes to get 300 tweets. And in this case, that meant paying someone on Fiverr $5 to tweet the post out to his 10,000 robot friends and get at least 50 retweets. It’s probably illegal. I saw pretty quickly that the post was going to get far more than 300 tweets, but I still spent the $5 just to see what would happen. It worked. I got 50 retweets, but I am pretty sure that nobody clicked on those. Would I do it again? Probably not.

4. Use Email To Ask For Help

To promote this story, I sent out 4 different emails:

5. Do All The Usual Stuff

I tweeted out the story (only once or twice), submitted it on HackerNews and shared it with our FB communities. I really want to start using Reddit as well, I just need to find the time.

Also, I have social sharing buttons (I use Sharebar), which actually got used for once.

I am probably missing some really good promotional ideas, huh? What would you have done?

Oh, and can you please help me spread the word about this? 🙂