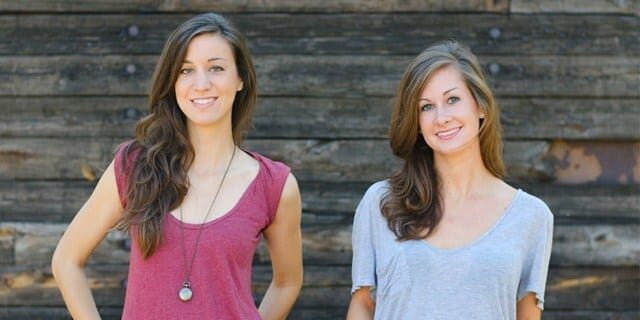 [quote style=”boxed”]Build relationships with other people. The friendships we’ve made with other entrepreneurs since starting our business have been invaluable. The support, knowledge and inspiration we’ve gained from them have been a key factors in getting us as far as we’ve come.[/quote]

Kristin Glenn and Shannon Whitehead are the creators of {r}evolution apparel, a sustainable travel clothing line for women. They recently launched their signature piece, the Versalette, and raised over $60,000 in pre-sales via a Kickstarter campaign. Their goal is to spark discussion about consumption and the environment, while giving women clothing options to “do more with less.” Production of the Versalette has already started and it will be available for sale via {r}evolution apparel’s online store in March.

Kristin and Shannon met in Australia in 2008 as recent college grads who were traveling on working holiday visas. After spending the following few years working and volunteering in various parts of the world, they reconnected to start a business that incorporated their love for travel and their hatred for traditional travel fashion (zip-off shorts, anyone?!). They officially started a business in August 2010 and vowed to create a social enterprise with a positive impact on fashion and the world.

K&S: We’re in the production phase of our signature piece, the Versalette. It’s a garment that can be worn more than 15 different ways (as a dress, shirt, skirt, hood, purse or scarf). We were recently funded via Kickstarter, an online platform for pre-sales and peer funding. We’re in the process of revamping our Website, setting up an online store and preparing to mail out over 700 pre-ordered Versalettes.

Where did the idea for {r}evolution apparel come from?

K&S: We’re both travelers by nature, so the idea for our 10-piece line came from experiences backpacking around the world. We are both quite minimal and readily mobile and saw a need for a wardrobe to reflect that. As we were packing for a trip to Nicaragua to research fair trade fashion, we realized there was a need for a sustainable and versatile wardrobe that hadn’t been filled.

K&S: Until recently, we both worked other jobs in addition to {r}evolution apparel, so our days were scattered between the 2. A typical day involves a lot of g-chat and Skype, eating lots of vegetables, drinking lots of coffee and moving full-throttle towards our next goal!

K&S: Notepads, pens, Google Docs and a good partnership. When we have an idea, we document it, share it and then take time to think about it. We research all of the ways to do it, talk some more and finally come up with a plan of attack. One of our goals right now is to have a mobile storefront to drive around the West Coast this summer; it’s an audacious goal, but we’re following our usual route and are sure we can make it happen.

K&S: Cradle-to-cradle fabrics. In the sustainable fashion world, the idea that we should be doing more than recycling and using organic fabrics is beginning to catch on. We should be creating fabrics that can be knitted and dyed in a zero-waste process. We’re so excited to hear people talking about it more and more and hope that fashion is heading in that direction.

Shannon: I spent one summer in Charleston, South Carolina as an intern for a big arts festival. I ran errands in 100% humidity, poured a lot of tea for a lot of rich people, learned the difference between a crumpet and a petit four and figured out how to smile even when I’d been on my feet for 14 hours. Lesson learned: you’re capable of more than you think, physical exhaustion is relative and event planning isn’t for me.

Kristin: I worked, essentially, as a janitor at a ski resort about a year ago. It was horrible: heavy lifting, a lot of boredom and strange hours. But the crew I worked with was awesome, mostly Mexicans who sent a lot of their money back home. It gave me insight into a completely different world and I’m grateful for that.

K&S: We would spend our money more wisely. It’s not like we were throwing around hundreds by any means, and we didn’t start with much, but we spent a lot of money on things that ended up being busts. We didn’t invest in enough professional services when we tried to outsource certain projects and we tried to go the “cheap” route. The cheap route is never a good road to take.

K&S: Build relationships with other people. The friendships we’ve made with other entrepreneurs since starting our business have been invaluable. The support, knowledge and inspiration we’ve gained from them have been a key factors in getting us as far as we’ve come.

Shannon: Tastebook, like Facebook but for people who like to cook. The irony is that I can’t toast bread. (And, apparently the web domain is already taken.)

Kristin: An app that connects people who are either offering or needing rides at the airport. So many times I’ve taken the bus or a taxi knowing that there must be someone on my flight headed in the same direction.

We share a lot on our blog, so secrets aren’t usually secrets for very long!

But between us, we are worried that our newfound success will be short-lived once people realize that while we know a ton about bettering the world through fashion, we don’t know much about fashion itself.

Gmail and its components (Google Docs and G-chat), Skype and Twitter. They allow us to connect with people on different levels, and that’s what our business is all about.

K&S: Let My People go Surfing: The Education of a Reluctant Businessman by Yvon Chouinard. It’s an ‘underdog’ story about the owner of Patagonia. For anyone starting out with very little and hoping to make a real difference, this book will inspire. (Plus it talks a lot about where clothes come from, which we think everyone should know about!)

If you weren’t working on {r}evolution apparel, what would you be doing?

Kristin: A mix of photography and travel, and probably writing a blog or posting a photo blog.

Shannon: Building a craft beer tasting business in Austin — like a wine tasting, but better.

Kristin: Damn You Auto Correct. Guaranteed to end in “LOL” no matter what.

Shannon: Reading The Oatmeal’s 10 Words You Need to Stop Misspelling. We clearly spend a lot of time online…

Shannon: From a business standpoint, Patagonia is a pretty inspiring company and doing a lot of heroic things in the apparel industry.

Kristin: I’m in love with Rebecca Burgess of Fibershed. I hope to one day be as connected with my clothes and surroundings as she is.

What’s the best thing about being an entrepreneur?

Shannon: Freedom. Being able to do what you love every day. Having a heightened sense of purpose. Meeting other awesome entrepreneurs.

What’s the hardest thing about being an entrepreneur?

Kristin: Attempting to turn your brain off when you aren’t working (but who are we kidding, it’s impossible!). Making sure that “you run your business” instead of the opposite, as cliche as it sounds. Keeping the faith.

What’s one thing about being a entrepreneur that you didn’t expect?

Shannon: It’s really not that fun to work in pajamas.

Where do you shop?

Kristin: I get this question a lot. Thrift stores and consignment. But for the first time in over a year, I am planning to purchase something that hasn’t been pre-owned: a pair of warm wool leggings for biking and snowboarding.