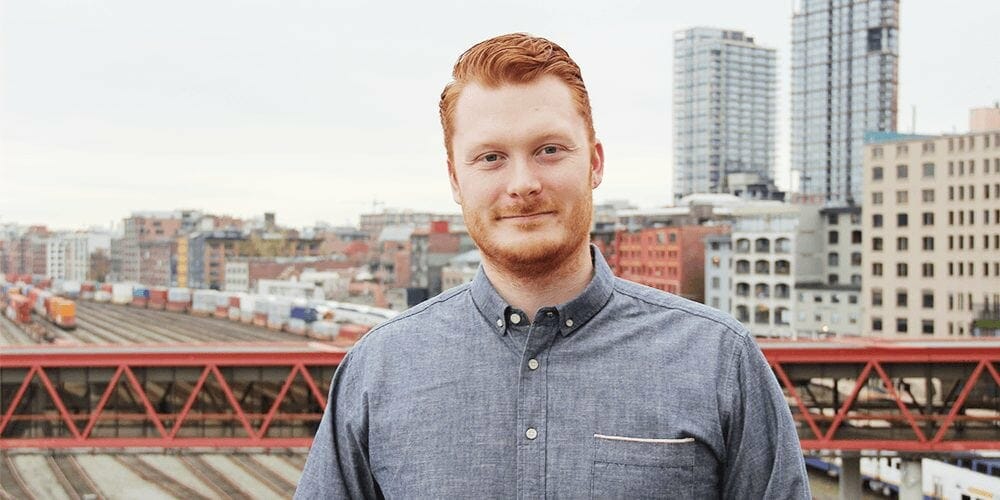 I’m very interested in tangible problems and making them go away. I thought there needed to be a solution that meant humans didn’t need to do these manual tasks.

Ian Crosby is the CEO and co-founder of Bench, the online bookkeeping service that pairs you with a dedicated bookkeeper and uses elegant, simple software to do your books for you.

Prior to Bench, Ian studied at UBC’s Sauder School of Business. The idea of providing business owners with bookkeeping software and human bookkeepers came to Ian while paying his way through school as a bookkeeper.

“I realized that bookkeeping was just a horribly inefficient process, and something that a lot of small businesses just don’t want to spend time on,” he says.

“Bookkeeping is just really frustrating for most business owners, and they needed a solution. I realized that if I was ever going to be an entrepreneur myself, bookkeeping was the one thing I didn’t want to have to deal with, so why not find a way to remove that burden entirely?”

After working as a management consultant at Bain & Company for two years, Ian launched Bench (originally 10Sheet) with three co-founders in 2011. The team graduated from Techstars NY in 2012, and today the company has over 100 employees. Bench is based in Vancouver, Canada, and services businesses across North America.

Where did the idea for Bench come from? What does your typical day look like?

I paid my way through college working as a bookkeeper in a software company. I hated doing tasks manually and wanted to save time. Also, my dad had a small law firm and I often did office work for him. The job entailed a lot of faxing, photocopying, and bookkeeping. I thought there needed to be a solution that meant humans didn’t need to do these manual tasks. I was constantly doodling ways to solve that problem. Generally, I’m very interested in tangible problems and making them go away.

I knew that these time-wasters were huge problems. After graduation, I worked at Bain, and one of the clients was doing accounting on an industrial scale. I saw all of the efficiencies they had, and I saw some novel solutions there. The technology for automation existed, and though I would need to adapt it, the fundamental problem had already been solved. I knew the market, knew the process, and saw a bunch of improvements that could be made. I married those things together and the idea for Bench – an online bookkeeping service that provides software and human bookkeepers – was born.

On the typical day, I work from home in the early morning and arrive at the office between 10 and 11am. At the office I spend about half of my time in meetings. I have an open calendar and people book me when they think I can help them with one of their priorities. Each day I write down my own top two priorities and that’s what I focus on achieving between meetings. I avoid reading email during the day so I can focus on those. At 5 I go home, have dinner with my family, and then answer emails from about 7pm until 11pm.

My process usually involves working with people that are way better than me in a bunch of specialized areas. I bounce ideas off of them and incorporate the concerns that they bring up. This works well because they come up with potential pitfalls that I wouldn’t necessarily foresee. On product ideas especially I also have my thought-partner Adam. I’ve known him for over 20 years, and after a certain point in the discussion, I know that he’ll be able to run with the idea and coalesce it from fiction to reality.

People are getting much more comfortable with technology, which means there’s a lot more opportunity if you want to build a tech startup. There are more potential buyers out there. Also, the ability of small startups to take on established companies has greatly increased. The playing field is much more level. It doesn’t take millions in capital to build a product anymore.

One habit I’ve developed is just ignoring most emails. I felt bad in the beginning, but now I get so many that I have to let it go. If you don’t do this, your time will get sucked up. If I can deflect it to someone else or ignore it completely, that’s what I do. That’s what lets me spend time on the problems and people that I really should.

When I was a teenager I worked for my brother’s construction company and I learned I’m really terrible where any sort of practical, physical work needs to be done. I worked there for 2 weeks. It wasn’t necessarily that I disliked the work itself, but rather I really just didn’t like being useless. I felt I was sucking up time and value and didn’t really have anything to add to the team. However, the experience was very educational. My brother doesn’t make excuses – he just gets shit done. I learned a lot about taking personal responsibility from that job.

I would focus more on revenue, and less on the idea. In pop culture, there’s this idea of the entrepreneur as having a really big dream that he never gives up on. We all have a picture in our minds of how the perfect product will work, but the reality is that you just need to double revenue, and then double it again. 90% of the product stuff you worry about at the beginning just doesn’t matter once you put it to the test in the market. Instead, the problems end up being things you never thought of. It’s a pretty humbling experience.

As an entrepreneur, what is one thing you do over and over and recommend everyone else do?

I’m obsessive about data. Perfect data is impossible, but I try to push as close as I can to the limit. For example, every time a customer leaves, we review in detail why they left and add that information to a database. We review that data to get a holistic view on why people are leaving, rather than going off of a few ad hoc observations. You need to put a lot of effort into making sure you really understand what customers want and what needs to improve. Not just what the loudest or angriest customer wants. It’s one example of something that lends itself to data rather than gut.

We are always focused on what we need to do to grow revenue. Can we double what we’re doing now? If we can, then we try to do that as quickly as possible. Every time you double you learn a lot. By the time we’re done doubling, it’s usually pretty clear what we need to do to next. Typically, we’re growing 20% a month on revenue; we do this by putting our heads down and not taking shortcuts and trying to grow 10x in one push. Just double.

I made a bad senior hire and though it was emotionally difficult, it was one of the top learning experiences I’ve had. I hired based on paper and didn’t follow my gut. I learned that deciding who to bring on to your team is like the opposite of data; you need to trust your intuition. I now have a high ‘gut’ bar that candidates have to pass.

Create a tool that shows you how effective your marketing spend is across channels. There are dashboards out there, but they don’t tell you how they’re getting those numbers; they try to hide the complexity and just show a pretty line. But the complexity is where all of the interesting stuff is. Tools like hubspot are a good start but they focus only on activity and not on how much money was spent to make that activity happen.

I was an amateur MMA fighter in college and started the MMA club there. Eventually I busted myself up so bad that I couldn’t do it anymore. I spent about as much time recovering from surgeries and injuries as I did practicing. It was a great sport though, lots of strategy involved.

James Hobson, the COO of On Deck Capital, has been a long term mentor of mine. It’s easy to end up with external advisors who only poke holes in your business, rather than point out what’s right with it. James was able to give me confidence that we were doing some things right, and that we should do more of what was working.