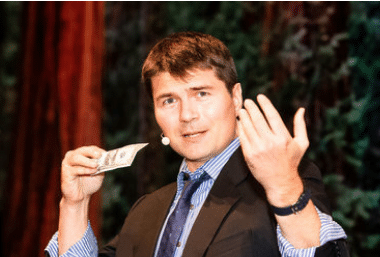 JB Benn has been an artist and entertainer for the last three decades. His passion for magic began when he was just sixteen years old and looking for something to do. One night, Benn stumbled into a random New York restaurant called Gramercy Park and started entertaining their guests with a variety of card and coin tricks. Here, he caught the eyes of Car’s frontman Rick Ocasek and his wife, Paulina Porizkova. The rest was history.

JB Benn continued to practice his craft and within five years was becoming one of New York’s most sought-after and beloved entertainers. This is when Benn’s love of magic started shifting from a passion into a lucrative career. He no longer had to randomly select restaurants or bars to perform in to get noticed; instead, he was being hired to perform at corporate events and private parties. Soon enough, JB Benn had a loyal group of prestigious clients.

Benn has entertained notable figures like Warren Buffet, Bono, and Mary Tyler Moore. He has also performed for renowned corporate clients such as HBO, Rolling Stone, and even Google. In 2013, JB Benn took his skills on-air and was the host and star of a new Travel Channel series called Magic Man. For the show, Benn traveled around the world and performed illusions for the area’s locals and tourists. A Manhattan native, JB Benn took his status as a local NY favorite and quickly became known as one of the greatest close-up illusionists of all time.

The “Master of the Invisible”, JB Benn’s career has given him the opportunity to travel all over the world, bringing wonder and amusement to people from Los Angeles to Mumbai to Saudia Arabia. Benn transports people into the impossible.

In addition to his own show, JB Benn also co-hosted a show with Chris Korn. In 2004, Mondo Magic, a series filmed in the United States, Canada, and Singapore, aired on A&E. Benn said in an interview right after the show’s premier that his love for “bringing out the child-like reaction in adults” is what fuels his passion. Some of his other on-screen appearances include Late Night with Conan O’Brien, an NBC special called The Royal Family of Monaco, and he also starred alongside Harrison Ford in Paramount Picture’s Sabrina.

JB Benn has also entertained celebrities and guests at various events, including Vanity Fair’s Oscar Party and multiple Golden Globe after-parties. He has been featured in various publications like Vanity Fair and Vogue as well.

Furthering his love of the great outdoors, JB Benn has also taken a number of primitive survival skill courses through the Boulder Outdoor Survival School (BOSS). Among his head instructors is Cat Bigney, who was a survival expert on The Great Human Race on National Geographic. Benn plans to continue taking classes to introduce himself to a variety of other survival skills.

When I was fifteen, I started performing at high-end clubs in New York City. After some exposure, I started to get bookings for private performances.

I practice my art for hours every day. I also spend time inventing new miracles and thinking through and experimenting with new ideas I have.

I try new “effects” at events, which I believe is the best way to see if an idea is good or not. Seeing people’s real reactions will tell you everything you need to know.

Breathing exercises. I think these exercises are very helpful at keeping you focused.

I am relentless at anything I’m focused on.

Don’t be afraid to make mistakes. Be fearless!

We really don’t know as much as we think we know.

Persistence is key. Always listen to your inner self.

The best strategy is to focus on being really good. Passion is not really a strategy, but more a state of mind. Obsessive desire is key.

I can’t think of any, as I believe failure is just a matter of perspective.

One business idea is to have some kind of platform like cameo, but instead of famous people, there are geniuses giving a piece of advice or inspiration. Pay a fee to listen to them for five minutes or ask them questions about how they became successful. I think this would be amazing and inspirational.

I recently bought a few books on ancient history. I believe that history constantly repeats itself, and there are valuable lessons in these books that can help us season our minds.

Google Calendar is the software I use all the time. Effective organization is one key to being productive, and google calendar does it in spades!

The Art of War by Sun Tzu. His teachings can be applied to our own personal battles.

“The ability to move from failure to failure with no loss of enthusiasm.” – Winston Churchill
“Creativity is the residue of wasted time.” Albert Einstein