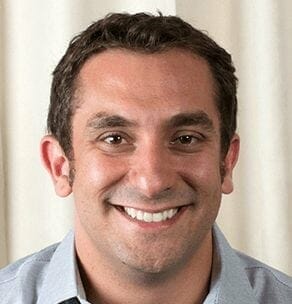 [quote style=”boxed”]Brainstorm under the premise that anything is possible and boil it down to actionable items. Then delegate.[/quote]

In 2005, John Berkowitz partnered with Nathaniel Stevens and Ben Rubenstein to co-found Yodle. Berkowitz has played a crucial role in the growth of the company. Most recently he launched the National Accounts department and YodleFranchise. Under John’s leadership, the National Accounts department has become the fastest growing division at Yodle, partnering with over 150 multi-location, national, and franchise brands.

Building out the national division of Yodle. This is the segment of our company that caters to multi-location franchises, manufacturers and larger enterprises. We’ve gone from working with a few businesses to having the national segment of our company generate one-third of our overall revenue. I’m focusing on rolling out innovative and unique products to these customers for local online marketing.

Where did the idea for Yodle come from?

Nathaniel Stevens, our co-founder, was working for his dad’s car dealership handling marketing, and he saw the need to help small businesses like his father’s move online. At the time we started Yodle, if you searched for “plumber in New York”, eBay would come up as the number one search result. Consumers searching the Internet for small business services had a hard time finding what they were looking for and we knew this could be drastically improved.

My days are a mix of being on the phone, attending leadership team meetings, talking with customers and white-boarding solutions to new customer problems. I start early and end late.

Brainstorm under the premise that anything is possible and boil it down to actionable items. Then delegate.

The Internet is not a fad, and yet 30% of small and medium-sized businesses are not online yet. It’s exciting to see the pace at which this changes. There is also a lot of interesting opportunity around mobile technologies, particularly because smartphone device usage is growing exponentially.

As a kid, I worked for my dad going on coffee runs for his crew. I had to take a lot of orders, and I learned that regardless of the job you’re doing, it’s important to pay attention to details. There is a big difference between cream and milk.

Better heed the principle of “measure twice, cut once.” I think we could have been more effective from the beginning by better testing ideas and strategies before implementing them. We could have sought more conclusive data on many projects and in general, been more data-centric and analytical in our decision making from day one.

I’ve made poor assumptions in the past on go-to-market strategies. As a first time entrepreneur who’s just getting started, you can foolishly think you’re right because an idea originated with you. Just because something is working doesn’t mean you’ve found the best way to do it. Overcoming this took seeing someone else do the same thing better and seeing how you I could emulate that.

I would like to make sure there are better, more practical education opportunities for children in the U.S. and throughout the world. We need to be more cognizant of the ways in which children learn and then restructure schools systems to adapt to these varying ways. This will take a lot of money as well as a lot of innovative and entrepreneurial teachers.

I hate people that are rude to waiters and hate rude waiters.

What are two of your favorite online tools or resources and what do you love about them?

It’s Your Ship. This was the book my father was reading when he passed away and it teaches the power of passion, ownership, commitment to greatness and delegation. It has great entrepreneurship lessons told in a creative way. The Last Lecture is also a great book.

Jimmy Fallon – He’s active and hilarious.
Russell Simmons – He’s vocal, a unique thought leader and he says exactly what he wants because he can.
Lake Lopez – He’s a good writer who posts good content and he always makes fun of me for my lack of Twitter activity.

Just now, thinking about these questions.

My father. He was wise, strong, hardworking and had real sense of moral commitment that extended beyond just religion and laws.

What is your biggest weakness?

What is your biggest weakness?

Trust in others. So true, it’s worth repeating.