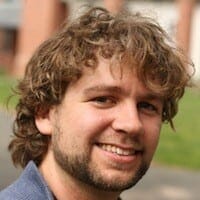 Rev. John Helmiere is the founder and “Minister of Listening” at Valley & Mountain Fellowship, a new spiritual community in the Rainier Valley, Seattle’s most diverse neighborhood. VMF’s vision is to build a radically inclusive and consciously interdependent community. Instead of being organized around doctrine or liturgy, the community is held together by common commitments to two actions/values: deep listening and creative liberation. Deep listening involves cultivating personal authenticity, practicing openness toward alternative viewpoints, and developing spiritual maturity. Creative liberation involves working to replace cycles and structures that produce poverty, violence, and marginalization with joyful, just, and interdependent alternatives.

John holds a B.A. from Dartmouth College and a M.Div. from Yale Divinity School. The latter awarded John the school’s highest honor: the Tweedy Prize for exceptional promise. As a fellow with the Fund for Theological Education, John conducted research at eight innovative congregations around the country that were innovatively meeting the needs of their neighborhoods. He is currently finishing a work informed by this pilgrimage that is designed to assist churches who want to engage in effective social transformation work. John is licensed as a pastor by United Methodist Church. He is married to Frederica Helmiere, a pioneer in exploring the overlapping discourses of ecology, spirituality, and international development.

What inspired you to create Valley & Mountain Fellowship?

I believe that the best vehicle for positive change is a diverse community of people who is inspired by a vision, energized through restorative spiritual practices, and empowered to join in the work of creative liberation. When denominational leaders in the United Methodist Church offered me the chance to build something like this from the ground up, I jumped at the chance.

How did you turn take Valley & Mountain Fellowship from an idea to an actual congregation?

After listening deeply to what was happening in my community and frequently consulting people I respected, I formed a vision for VMF. As someone heavily and intentionally involved in my city, I simply share the vision with people in my networks when my work naturally arises in conversation. I invite people who find the vision intriguing to our events. From there, leaders emerge, they contribute their passions and ideas to the community, and we mature in capacity, quality, and breadth.

We’ve created a totally new format for a church service that we’re kicking off this Sunday afternoon. It has three movements: First, after a welcome and song, we break into groups for 20-25 minutes depending on what each person feels will best help them encounter the Holy that day. One group learns a meditative practice and does it in silence together. One group does full body prayer (i.e. yoga). One group follows artistic pursuits. One group makes sandwiches for the local food bank. Second, we re-gather with a song and someone offers a reflection. Third, we enjoy a simple meal together around tables and talk about what we heard and experienced that day, before closing with a song. It’s still an experiment at this point but there’s been lots of community interest.

What has been the most rewarding part of creating and building Valley & Mountain Fellowship?

It is a great joy to hear people say that after feeling spiritually homeless, they have found a home with VMF. I look forward to the day when VMF is helping provide physical homes for the physically homeless as well.

What has been your greatest challenge and how have you overcome it?

Without commitment there is no community. I have a hard time asking folks to commit to anything because I hate the idea of putting pressure on people. Religious leaders have done far too much pressuring already. My solution came when I read this statement by Howard Thurman, the great African-American mystic: “Do not ask what the world needs, ask what makes you come fully alive. Because what the world needs are people who have come fully alive!” I have begun using Thurman’s passion-based framework for thinking about commitments instead of the typical deficit-based framework. In other words, instead of asking “what are our needs and who can we get to solve them?” I ask the more important question “what makes you feel fully alive and how can you offer that to the community in a way that will help it flourish?”

Not to get all preachy on you, but Jesus inspires me. He was tenacious, bold, and impolitic as he challenged the rampant injustices of the Rome and its proxies in his homeland. His example has inspired me when I require the courage to speak truth to power here in Seattle.

The diminishing privilege of the institutional church. Surprised? I believe that the fading influence of institutional religion in American public is liberating people with long-marginalized identities from repressive, church-backed shackles of social conformity. Simultaneously, this change is forcing Christians to relinquish our positions of socio-political privilege, freeing us to live counter cultural lifestyles of love and grace.

The growing public awareness of liberation theology. Liberation theology emerged among Latin American peasants in the 60’s after the Catholic Church started allowing them to read the Bible. They discovered that God was always on the side of the oppressed and found the strength to believe in themselves because of it. Ironically it’s folks like Glenn Beck and Bill O’Reilly who are fostering public awareness as they rail against it on their nightly shows. They have no deep understanding of it, but that they do know it challenges their brand of pseudo-religious nationalism, and they are terrified.

An activist spirit among very young people. VMF reps stood outside Seattle’s biggest mall the day after Thanksgiving (the busiest shopping day of the year in the U.S.) handing out ethical shopping guides that rated the environmental and social impacts of corporations. Teenagers easily understood that they could make a difference by using their money to support good companies instead of wantonly destructive ones.

I frequently failed to do insufficient follow-up with newcomers at our events. In a city like Seattle, there are lots of places to go and have a good time. People don’t just want to be furniture at an event, they want their presence to matter. I’ve realized that a note of thanks for what someone contributed to an event (which is always something since our events are conversational) helps them realize that they added something to our community.

What is one book and/or tool that helps you?

The Courage to Be, by Paul Tillich, has been called the most important book on religion in the last century. It analyzes the great existential anxieties of humanity and offers a profound and compelling response. It has also helped me develop a theological vocabulary that is more resonant with the postmodern mind. For example, I neither talk nor think of God as a being in the sky, which is archaic and intellectually absurd to many of us. Tillich speaks of God as “the ground of being” in which all existence is rooted. This inspires me to think creatively about the meaning and articulation of my ultimate concerns.

Yvette Flunder is a poet and a prophet. She is doing ground-breaking work with poor, black, LGBT (lesbian, gay, bisexual, transgender) individuals in San Franscisco and increasingly around the world.

What is the difference between Valley & Mountain Fellowship and non-profits working for change?

Non-profits are good at working for change but are ill-equipped to build and mobilize a community to strengthen their efforts. Also, their support comes from people who already share their agendas. VMF, like other spiritual communities, is a meaning-making body that helps people develop more mature consciousnesses and value systems.

What gives you hope?

Because of seemingly endless wars, the growing disparity between rich and poor, and the ecological crises, lots of us feel tremendous existential anxiety and despair. Yet, I agree with Dr. King who said, “Though the moral arc of the universe is long, it tends toward justice.” My hope is ultimately rooted in the belief that those of us who work for a better world are not alone.

How can members of our community help contribute to yours?

Tell your friends in Seattle about us. An astounding number of people find our community appealing when they learn about us. We don’t spend money on ads. We are a word-of-mouth venture.