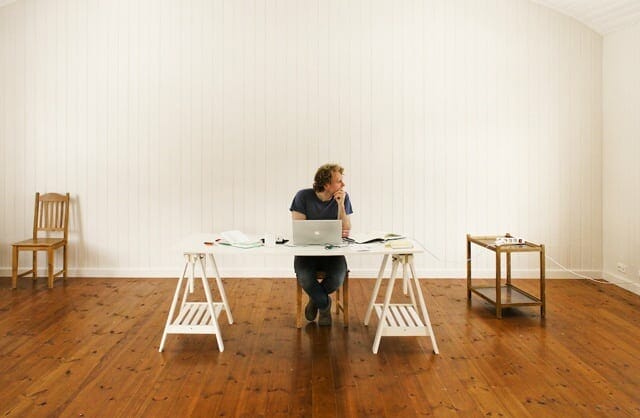 [quote] Spend time alone in nature. If your ideas still seem worthwhile in the presence of natural solitude, then they are probably worth pursuing. [/quote]

Jonathan Harris makes projects that re-imagine how humans relate to technology and to each other. Combining elements of computer science, anthropology, visual art and storytelling, his projects range from building the world’s largest time capsule with Yahoo! to documenting an Alaskan Eskimo whale hunt on the Arctic Ocean (with a warm hat).

He is the co-creator of We Feel Fine, which continuously measures the emotional temperature of the human world through large-scale blog analysis and has developed other projects about online dating, modern mythology, happiness, anonymity, news and language. His latest project is Cowbird, a community of storytellers working to build a public library of human experiences.

Jonathan studied photography with Emmet Gowin and computer science with Brian Kernighan at Princeton University. His work has been recognized by AIGA, Ars Electronica and the state of Vermont for co-creating the Vermont state quarter.  He won a 2005 Fabrica fellowship and has been awarded 3 Webby Awards. He was named a 2008 New Visual Artist by Print and a 2009 Young Global Leader by The World Economic Forum.

His work has been exhibited at MoMA in New York, Le Centre Pompidou in Paris, The Victoria & Albert Museum in London, The CAFA Art Museum in Beijing, the Garage Center for Contemporary Art in Moscow and The Pace Gallery in New York. He has been featured on CNN, NPR, BBC and Bhutanese television.

He has lectured all over the world, including the TED Conference, Google, Princeton University, Stanford University and at least 2 hippy forest gatherings.

Starting on his thirtieth birthday, he documented his life for 440 days with 1 photo and short story a day.

Born in northern Vermont, he now lives in California–and on Cowbird.

Bringing Cowbird out into the world.

Where did the idea for Cowbird come from?

I’ve always dreamed about building a public library of human experience — a kind of Wikipedia for life experience.

Cowbird is a small community of storytellers sharing heartfelt and personal stories.

6:00 AM: Wake up, listen to the ocean, walk across the sandy beach and climb 250 stairs up the dark hillside under the moonlight

8:00 AM: Eat a breakfast of yogurt and granola and French press coffee

11:00 PM: Step outside, breathe the air and watch the stars and the lights of passing squid boats

Slowly and usually in solitude.

The rise of empathy.

Weeding gardens in Vermont when I was a teenager. I learned it is better to work on things where you can build something long-lasting. Throwaway work is wasteful.

I’d focus more on being young.

Spend time alone in nature. If your ideas still seem worthwhile in the presence of natural solitude, then they are probably worth pursuing.

Remember that businesses were initially created as a way to solve social problems, not just to make money.

Technopoly by Neil Postman because it will wake you up from the dangerous cult of technological euphoria and the cult of data, which is like the new pornography.

I always work in silence.

When I’m not working, I listen to Bob Dylan, Godspeed You Black Emperor, Philip Glass, Keith Jarrett, Nico Muhly and Portishead. Nico Muhly was talking with Jonsi from Sigur Ros about music and Nico said that to him, music must be preferable to silence; otherwise it is not worth adding into the world. Most music is not preferable to silence.

A few moments ago on the beach while watching a 5-year-old’s birthday party.  He was trying to juggle rings for everyone in the wind, but the wind made it hard.  Finally he managed to do it, the crowd cheered and he got a big grin on his face. He was still trying to concentrate intensely to keep the rings in the air; the smile sneaking through his concentration made me laugh out loud — it was so cute.

Joseph Campbell, the writer and lecturer known for the philosophy of “follow your bliss.”