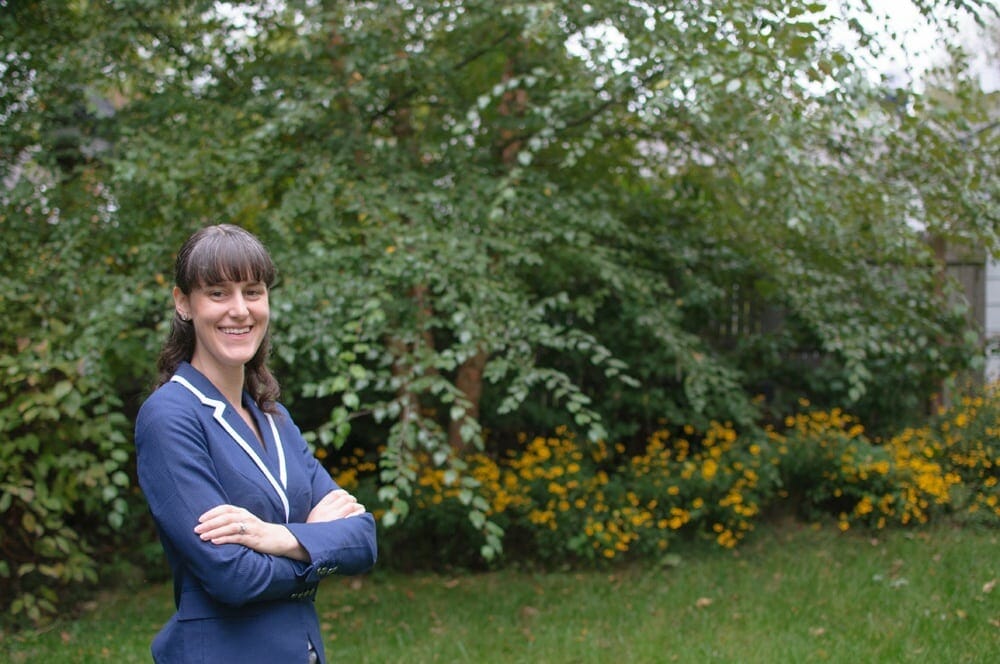 Pursuing multiple passions isn’t a bug, it’s a feature….Society often tells young people that they should focus on one interest, I wouldn’t be where I am today if I had followed that advice.

Julie is herself a local elected official. In 2013, she became the youngest woman ever elected to the Rockville City Council in Maryland. During her two terms in office, Julie has led numerous progressive initiatives, including sponsoring legislation to ban smoking in outdoor dining areas of restaurants, keeping local police focused on fighting crime rather than enforcing federal civil immigration laws, and creating a water conservation program that protects the environment and helps low income families to afford their water bills.

Julie is running for the Maryland House of Delegates in 2018. This is her third time running for office using Victory Guide. She co-founded the company after her first successful run for office.

A trained scientist, Julie became interested in politics after completing her Master’s degree in biology. She previously worked for a U.S. Senator and for the American Institute of Biological Sciences, a national non-profit that works to bring science into federal policymaking.

Victory Guide was part of the inaugural cohort of Higher Ground Labs, a startup accelerator for tech companies that are building the next generation of campaign tools for progressives. It won the 2018 CampaignTech Award for best down ballot technology solution.

Where did the idea for Victory Guide come from?

Victory Guide was born out of my own experience of running for elected office. In 2013, I was a first-time candidate running for city council. Like so many candidates for local office, I had a small budget, no paid campaign staff, and only a handful of volunteers.

I had received training on how to run for office, which stressed the importance of running a data-driven campaign. My goal was to knock on thousands of doors and harness the information I collected from these conversations with voters to inform my campaign messaging and strategy. But there literally wasn’t any app or software platform on the market that met my needs and my budget.

My husband, who is a software developer, created the prototype of Victory Guide. Using that app, I personally knocked on 5,000 doors and came in first place in a field of six candidates. At the age of 30, I became the youngest woman ever elected to the Rockville City Council. And we took that app and turned it into a business.

My day starts with my three-year-old waking me up and getting him ready for pre-school. I spend my mornings focused on Victory Guide customer acquisition and marketing and my afternoons on product development and operations.

I then spend a few hours most evenings knocking on the doors of voters for my campaign for state delegate—this time also serves double duty to allow me to test Victory Guide out in the field.

I also serve on the City Council in my town and have commitments a couple of nights a week in that capacity. (It’s a part-time job and most meetings are in the evenings.)

After I put my son to bed, I work for a little longer, before decompressing by watching a period piece.

Because I’ve run for office three times, I have an intimate understanding of what Victory Guide’s customers are going through. My goal is for Victory Guide to stay focused on being an easy to use product that doesn’t present technological barriers. I truly believe that anyone should be able to run for office if they have the desire, the drive, and the work ethic to do so. Learning to use technology shouldn’t be a barrier. And that’s the mindset with which we approach all new features for Victory Guide. We want all aspects of the product to be very easy to use. Our design process often involves simplifying the user experience, rather than making it more complex.

The election of Donald Trump has motivated tens of thousands of first-time candidates to run for office. It’s amazing to see so many women, people of color, and Millennials stepping up to lead their communities. I hope that this sense of civic engagement continues for years to come.

I’m a big fan of schedules, especially since I have personally have a very full plate as CEO of Victory Guide and as a City Councilmember and also running for the Maryland State House. I need to be productive throughout the entire day in order to get everything done. By blocking off sections of the day for different responsibilities, I make sure that I can focus to get everything done.

This isn’t advice so much for my younger self, but I wish I had left my day job sooner to work full-time on Victory Guide. It was scary to make the leap from a secure job to running a startup, especially since my husband had already made the leap. Giving up a stable job seemed like a big risk, but in hindsight, I think I was more afraid of changing careers than anything.

Pursuing multiple passions isn’t a bug, it’s a feature. For my entire adult life, I’ve had multiple career interests: biologist, policymaker, politician, tech entrepreneur. Society often tells young people that they should focus on one interest, I wouldn’t be where I am today if I had followed that advice. One endeavor has lead to the next and the next. And I wouldn’t have the skills to lead a startup without all of those prior life experiences.

Proofread every email before you hit ‘send.’

I’ve been hosting webinars as a low cost way to identify new sales prospects. Our webinars have focused on teaching candidates and grassroots advocates how to organize various parts of their campaign and voter outreach operations. This is largely information that the Victory Guide team already has, so it’s just a matter of organizing our thoughts into a presentation. These webinars have been effective at generating interest from potential customers, some of whom then go on to schedule a demo of our product.

Like all startups, we’ve had our ups and downs. When your company is in the trough of sorrow, it’s especially hard to keep slogging ahead. (If you’re not familiar with the emotional curve of being a startup co-founder, check it out here: .) It was comforting to know that every business experiences low points. When faced with those challenges, you can either quit or you can keep pressing ahead.

Polling for down ballot races. The vast majority of candidates for the 500,000+ elected offices in the U.S. spend a very small amount of money to elected. There aren’t hard numbers on this, but think in the range of $500 to $50,000 in total per campaign. At $10,000 a pop, telephone-based polls are way too expensive for this market. Even the newer online polling is outside the price range of this market. So these candidates are flying blind in their races besides the data they collect directly from voters during door knocking and phone banking. Polling would have put my mind as ease in all of my races if I could have afforded it.

Eating dinner out together as a family.

Calendly. It allows me to schedule demos, meetings, and phone calls easily without needing to go back and forth over email with the other person to set a date/time. The service syncs with all of my calendars and finds blocks of time that people can schedule meetings with me. I save a lot of time by using it.

Most of the reading I do professionally is about elections. If you are looking to better understand the science of running for office, I recommend “Get Out the Vote: How to Increase Voter Turnout” by Donald P. Green and Alan S. Gerber. The book summarizes decades of research on how to get voters to turn out to vote in a way that anyone can understand.

“If this isn’t nice, what is?” —Kurt Vonnegut

(You have to appreciate the small things in life, such as drinking lemonade on your front porch on a warm afternoon.)