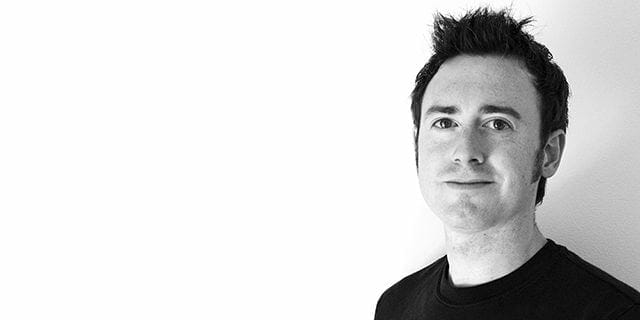 [quote style=”boxed”]If you’re not asking for feedback on your ideas, you should start today. When I see ideas that don’t make sense to me, 9 times out of 10 it is because the person has closed themselves off to feedback.[/quote]

Keith Harper is a graphic designer, coworker, and bootstrapping startup founder. His work has appeared in Print Magazine, Commercial Arts, and LogoLounge. He works together with his wife in New York.

My wife Jana and I (she’s a developer, I’m a designer) just completed a pivot on the the business model for our first startup. Well Crafted is the portfolio that gives back – we take 10% of our revenue, and fund projects from the design community. We are trying a new “Pay what you can” subscription model as well – we recognize that everyone has a different financial situation. You can even sign up for free. When you pay, you’re giving back to the community, which is something we’re really excited about.

Where did the idea for Well Crafted come from?

Well Crafted was really borne out of my frustration with updating my portfolio. I was managing multiple sets of data (images for the web, for Keynote presentations, and for iPhoto sets on the iPad) and it was becoming a pain to update. I needed a true web application, with a proper database, and the ability to manage my work in one place.

A potential client had also asked us to build a portfolio app for his wife, an artist, and that sparked the idea to build our first iteration, a mobile portfolio app called GoFolio. After working on this for a couple months, we decided to build the web version first, as we’re much more proficient in building web applications that iOS apps. After many months, we released a beta, and renamed the service Well Crafted.

We make money by asking designers to “pay what they can” for a portfolio subscription. We ask for $9/mo, but designers can pay as little as $1/month if they would like, or even sign up for free. The goal is to couple a good service with the incentive of giving back, and entice designers to pay it forward with a subscription.

No two days are the same, to be honest. It may sound cliche, but that’s reality when you’re bootstrapping a startup with client work. Currently we are focused on promoting Well Crafted, and getting people excited about our 10% For Design initiative. I’d say I spend about 3/4 of the day working on client projects to keep the bills paid, and the other 1/4 focused on Well Crafted.

Jana and I are lucky enough to be able to execute on, I’d say, 95% of the work we need to do. I handle the design and front-end coding of our web applications, and Jana handles all of the back-end and system administration. For the last 5%, we’ll ask our friends for help or do a trade for services. We definitely take the lean approach to developing our software – we work in small, focused sprints. We’ve gotten much better at working in this manner – it took me a while to adjust to the idea of a lean process, after spending years working in a traditional waterfall process.

I think the most important trend right now is responsive design, and it’s really exciting to build a product that is focused around this. As I mentioned before, managing your work in multiple locations, formats, and programs is a pain. Websites used to build a separate “mobile-only” site, but that’s silly because again, you are duplicating data. In some cases, mobile sites will contain different data, which is silly. When you build a proper responsive site, the design simply adjusts to the device you’re viewing it in, using the exact same data.

After my first year at college, I went back home and got a job doing landscaping at a hotel. The job title was intentionally misleading, however, as I was asked to wax the floors, take out the trash, etc – basically janitorial work. This would have been fine, but the expectations were totally mismatched. I was bored out of my mind, and left within a week to become a summer camp counselor, which was much more rewarding. I think what that experience taught me most was that it is OK to quit a job if it’s not right for you. People will tell you to hang on to a job, because when you’re not somewhere for very long, it looks bad. I don’t subscribe to this theory at all – we only live once, and since there’s no guarantee how long any of us will be around, why waste it on a job that doesn’t align with your expectations or interests.

If we could start over on Well Crafted, I would do many things differently – that’s what happens when you start putting those 10,000 hours in (as Malcolm Gladwell would say). You learn so much by doing, and by forcing yourself to solve problems that you initially know nothing about. The two biggest changes would be 1) brainstorming different business models and 2) adopting the lean process.

I think the thing I probably do over and over is debate the merit of my ideas and solicit feedback. You have to mull any important decision over many times before settling on a final direction. If you’re not asking for feedback on your ideas, you should start today. When I see ideas that don’t make sense to me, 9 times out of 10 it is because the person has closed themselves off to feedback. On the flip side, I believe that this notion of “the wisdom of the crowd” is complete rubbish – you want to verbalize your idea, gather feedback, and then make a final decision yourself.

I would say the first real failure we experience was in the development of our other product (currently on hold). It’s called TruBalance, and it’s a mobile app that tells you how much money you can spend, right now. We had this idea ages ago, well before Mint came into existence, and before we started working on Well Crafted we were working on the first iteration of this app. Our business model was simple – charge people a monthly fee for access to our app. The problem was, we had a huge, fixed upfront cost in the software that allows us to access bank accounts. The software would cost as much as we wanted to charge for the app. So before we even really began, our model had blown up.

First of all, I want to say that ideas are worthless without execution. Everyone has ideas, you just have to put the work in to make them happen – that’s the true test – can you actually ship a product. If I had to give away one idea, it would be compostable puzzles… each puzzle tells some sort of story about the environment (this is an educational, kid-focused idea), and seeds are embedded in the paper. When you are finished with the puzzle, you plan the pieces in a pot, and watch flowers grow. The life-cycle of the whole product should be considered.

I would overhaul the patent system – the rules were intended for a different time, and are now being abused by large corporations to stifle innovation and competition.

I have narcolepsy, a neurological disorder of unknown cause that makes me very sleepy every day, usually in the afternoon. Only about 1 in every 2,000 people have narcolepsy, and I’ve just started getting involved in the narcolepsy community here in New York.

Fogbugz: A bug-tracking tool that we use to manage all of our project planning. Works especially well for sprints.
Harvest: Harvest tracks time, allows you to send online invoices, and makes managing our billing incredibly easy.
Stripe: A developer-friendly online payment system. We utilize Stripe for Well Crafted and client work as well (they integrate with Harvest!)

Wow this is a tough one – there are so many good books out there. My favorite books are ones that delve into the psychology behind things – why people make decisions, what influences them, understanding the psychological forces behind human behavior. If you’re interested in this, I’d say start with “The Tipping Point” by Malcolm Gladwell. If you want to start with someone more business-focused, give “The Innovator’s Dilemma” a read – it gets very dry at some points, but it’s fantastic.

@dannywen is the co-founder of Harvest, and a bootstrapper extraordinaire. Danny and his co-founder Shawn have proven how to build a business without the need for investment from the slightly bizarre world of startup venture capital.

@davedawson and @jonnygotham are fellow digital makers who are full of idea, can execute on them, and aren’t afraid to their hands dirty. Expect to see some big things from them in the near future.

That’s a tough one, as I’m pretty sure I laugh out loud at least once a day. Actually, the most recent time was two days ago, when Jana exuberantly texted me that we had signed up our first “pay what you can” designer for Well Crafted.

I’d have to say Eddie Izzard – the man struggled for years to break into the comedy business, and his perseverance paid off in the end. We watched him play Madison Square Garden a few years ago. If you watch his documentary “Believe: The Eddie Izzard Story” you’ll understand how hard he had to work, and how many failures he experienced, to make it to MSG.

What is the secret to success?

There is no playbook. Success is a combination of perseverance, hard work, luck, timing, randomness, and myriad external factors. Read another Gladwell book, “Outliers,” for a more thorough analysis of this mix of factors.

What makes someone creative?

This is a simple one – we’re all creative at heart. But you have to nurture your creativity, otherwise it can become old and stale. One of the best ways to spark ideas and keep that creative spirit alive is doodling. Doodles are not fine art, and everyone can draw. Get a sketchbook, pen or pencil, and start doodling. You’d be surprised what you come up with.