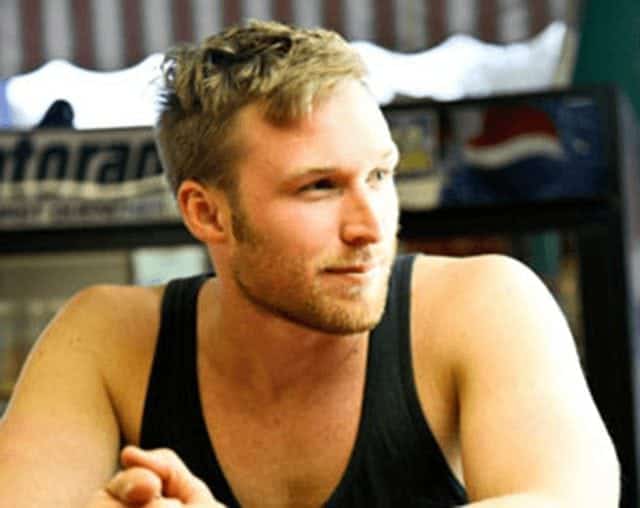 [quote style=”boxed”]Write. Every day I write down ideas and plans to refocus myself and gain perspective. Externalizing my ideas helps to pinpoint the most powerful actions I can take every day. It also reminds me that I’m making progress.[/quote]

Kyle spent the majority of his teen years in front of five computer monitors trading various financial markets, culminating in him opening a hedge fund while in college.

After making $5000 while sitting through a monotonous lecture he realized there were some things that his professors couldn’t offer him. This led to his passion for self-reliance and alternative education.

Fascinated by the Internet and business, he went on to manage virtual communities at Affluence.org and later at Grooveshark.com.

After closing down his fund and engagement at Grooveshark he took a year-long sabbatical to explore the world and philosophies in it. During this time he dove deeply into yoga, meditation, and art. He meditated for ten days in the woods, wrote and directed a short film, and published a book of poems. This deep exploration of the “other side of life” has given him a profound appreciation and love for the art of business that he continues to explore.

StartupBros.com; Launching the new book, Self-Made U: How To Thrive When Degrees Don’t Matter

Where did the idea for StartupBros come from?

StartupBros was born when Will and I decided to create the entrepreneurial community that we had been looking for. I have a deep, almost spiritual, belief in the importance of self-reliance for people. Freedom from a boss can often mean a sense of freedom in the rest of your life. That’s what we’re trying to give people with StartupBros.

We have many sources of income. Book and course sales, coaching, and affiliate links currently dominate.

I wake up at 6am and read for an hour or two. I will usually read from three or four books of different types – business (currently The Impact Equation), fiction (currently Snow Crash), philosophy (currently How To Live: A Life of Montaigne and Thus Spoke Zarathustra), and others (currently cycling through On Writing by Stephen King, Hacking Your Education by Dale Stephens, and others).

Then I work out briefly. This usually consists of kettelbell swings, pushups, sit-ups, squats, and a run.

I have a hig-protein breakfast. Then I write for a few hours. Have lunch. Then do miscellaneous work: meetings, email, whatever needs to get done.

Of course, this schedule falls apart all the time. When I’m writing a big post I like to really dig into it. This means I may just be sitting at my computer for 12 hours writing.

Those are good days. If things are too regimented I begin to suffocate and feel like a cog again. It’s important to have variability in my workday.

I bring ideas to life the same way anybody else does – I act on them.
I often let a good idea stew in my head for a while. Then write it down. Then implement a small piece of it. Test it. Then correct, then try again. I just try to do it faster than other people.

The most exciting trend to me right now is the revolution in education. The turmoil in the economy in the last several years has shown us what skills actually matter and which don’t. I think we are going to see a lot more people respecting their interests and passions over standardized tests. We know now that we as individuals know more about what we want to learn than the government or industrial revolution-esque corporations.

No job was terrible because I learned from it or quit when it became no good. There were some bad bosses. I did a writing job for some guy and he tried to doc my pay by a few hundred bucks. I said, “Give me my money,” then, “Goodbye.”

I’d do a lot of things differently – but I’m simultaneously grateful for everything that has happened. There is no smooth path to success in entrepreneurship. You need to try really hard, trust your natural inclinations, and be willing to stick your neck out. Here are a few things that come to mind:
-I would take things less seriously.
-I would fail more quickly and use the lessons instead of dragging things out.
-I would stop looking for so much advice. Direct experience is the wisest teacher you’ll ever have. Act and observe.

Write. Every day I write down ideas and plans to refocus myself and gain perspective. Externalizing my ideas helps to pinpoint the most powerful actions I can take every day. it also reminds me that I’m making progress.

I finally started acting like an entrepreneur when I realized that I had read 20 books and attended too many events on the subject without building anything of my own. So build!

Make a better e-reader. All the big guys are missing the point still. eBooks should not be digital files mimicking a physical book. If want to feel a physical book then I’ll buy a physical book – a digital book trying to be a physical one is just sad (and frustrating to use). Make an e-reader that frees itself from the idea of being a book. It’s a digital file that we read. The person who nails this is going to win big-time.

If I could change one thing about the world (and I can) I’d make less people dependent on others for their survival and happiness. We let advertisers make us feel bad about not having their products. We let schools tell us we can’t do anything in the world without a diploma. We let the assumptions of others bring us down. My aim is to alter our idea of education to focus on reality instead of the assumed limits set by the state.

I wrote a book of poems and have directed several short films. I also love Dr. Seuss, still.

Google first, because it finds all the other ones for me. James Altucher’s blog and Marc Maron’s podcast because they got me through a really hard time in my life. StartupBros.com third, because you have to love the thing you’re making. Assuming I shouldn’t talk about my own work – I’d say VisualWebsiteOptimizer. It’s an amazingly powerful tool to A/B test your site so you KNOW which designs/layouts/copy work the best.

I have to say Friedrich Nietzche’s “Thus Spoke Zarathustra” partly because part of your name overlaying his famous idea of the übermensch and partly because it will free your mind. Anyone who truly loves ideas won’t be able to help but love Nietzsche. If you want a current author then go with Nassim Taleb. Nobody has triggered more ideas in the last few years than him. His newest book, Antifragile, is his best.

I use Twitter almost solely for responding to people contacting StartupBros so I can’t really give a decent answer.

About 20 minutes ago, the cause is NSFW. Sorry!

My hero changes. When I was a sophomore in High School it was Ron Paul (it still sort of is). Then I found Ayn Rand and she dominated my thoughts. Then I read “The Four Hour Workweek” and Time Ferriss was my hero. Then I saw “Pulp Fiction” and Quentin Tarantino was my hero. Then Wes Anderson. Then Steve Jobs when I read the Walter Isaacson biography. Then a fictional character from the Dune series. Last week is was Alexander the Great. For a while it was James Altucher. After I read “Beyond Good and Evil” it was Nietzsche for his ability to get so close to truth. Richard Branson spent some time as the hero. This week, though, it’s me (this is a good week).

How do I network?

Make genuine friends. They last longer, the ties are more powerful, and you won’t regret spending time with them on your deathbed.

How do you choose what books to read?

I don’t read something because I “should”. The only new books I read are by bloggers I love or strongly recommended to me by people with impeccable tastes. Books cited in books I love. As few new books as possible (except from authors I know I love).