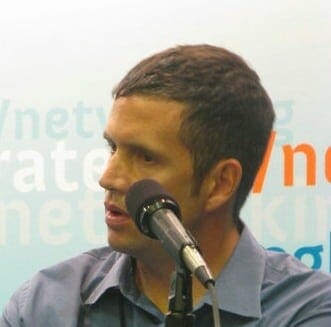 [quote style=”boxed”]I believe strongly in hiring the best available entrepreneurial talent over the best available experience fit.  At a startup, everyone has to do bit of everything… it’s best to have talented, fearless folks who can pick up anything as opposed to specialists.  We always tell our new hires that your next stop will be your own startup.[/quote]

DoubleDutch helps enterprise teams stay connected, log their activity, and get work done – all via their smartphones.

Lawrence is also the geolocation editor for The Next Web, and is a mentor at IO Ventures, a San Francisco based incubator.  A three-time entrepreneur, Lawrence also founded RateItAll, a top ten consumer review property.

Prior to his Internet career, Lawrence worked for Nortel Networks in a variety of roles throughout Latin America.

When he’s not working or spending time with his family, Lawrence can be found on the basketball court.  Despite his advanced years, Lawrence qualified for the Red Bull, King of the Rock, national one-on-one championship in 2010, a point he brings up frequently.

Lawrence lives in San Francisco’s Mission District with his entrepreneur wife Lilia, and his daughter Lucia.

I’m trying to get my head around how mobile, social technologies will change the way that people work by using the consumer world as a guide.  Specifically, we’ve seen email go from the top attention getter online for consumers a few years ago, to where it is now – a distant third place behind social and gaming.  I expect that email is going to be displaced in the workplace as well.  The challenge is figuring out how to get in front of the curve, and what the applications that displace email are actually going to look like.

I kick off with some coffee, and then try and read as much industry news as I can before the day gets full.  Once 10AM rolls around, it’s a lot of sales calls, a lot of time spent trying to remove friction in our business, and a whole lot of triaging in order to get the most critical stuff done.  I guess it’s the typical start-up life.

If you want to talk numbers, my company DoubleDutch actually builds software that tells you precisely where you are spending your time.  Currently, I am spending about 70% of my time on outward facing stuff like recruiting, business development / sales, and PR.  A few months ago, it was quite different, with most of my time going towards product.

I hate to be obvious here, but it’s hard not to get excited about the combined potential of mobile and social.  For the first time ever, mobile devices have outpaced desktop devices in terms of shipments, and I don’t think anyone really has a grasp about the magnitude of the changes / opportunities that are underway.  My guess is that this thing is going to get a whole lot bigger than just photo sharing.

Another trend that I find really compelling is the concept of Personal Analytics, specifically those that are enabled by smartphones.  We’re seeing some breakout apps like Fitbit and Runkeeper on the consumer side that measure physical activity – my sense is that the proliferation of smartphones, fast connections, and APIs are going to enable a whole new world of structured data capture that could have profound effects on everything from health, to workflows, to parenting.

At a macro level, I try to look for things that weren’t possible until recently, and then build out services that allow the most number of people to take advantage of the new opportunities.  A good example was my first start-up, RateItAll.com that launched in 1999.  I saw a world in which suddenly anybody could write to the Internet and I set about building a service that let anyone share their opinion about anything.

At a micro level, I try and solve problems that I have myself.  So at DoubleDutch, we were finding that email just didn’t match our work very well.  Email is built around Senders and Recipients, and our work is structured around Customers and Projects.  Big disconnect.  So we tried to build something better, which is now the foundation of our company.

In my wheelhouse are the ideas that cross both realms – something that wasn’t possible until recently, and that solves a personal problem I have.

My first start-up was a consumer ratings start up called RateItAll.com.  This site was my baby for a long time.  We tried a lot of pretty radical things with it – stuff like the ability to follow keywords and topics, game mechanics before they were cool, and going to an exclusively news feed format before just about everyone except for Facebook.  I’m still extremely proud of the site.

When we finally got the thing funded, it seemed like the only metric that mattered was traffic to the site.  Traffic drove reviews and revenue, and the best way to drive traffic was via search engine optimization.    So I began obsessing about search engine referrals, to the exclusion of everything else.  I began chasing the algorithm as they say, and spending less time around metrics around engagement.

This was a monstrous mistake on my part.  Two Google updates later, our traffic was down 40% and our morale was broken.

Foursquare for pickup basketball players.  As an avid hoops player, I try and play pickup hoops whenever I can.  Finding the right court at the right time in the right city is a challenge.

The two big aggregators I read are Techmeme and Hacker News.  I hit the usual tech blog suspects quite a bit as well: The Next Web, TechCrunch, GigaOM, RWW, Venturebeat, etc.  My favorite individual blogs are AVC and Mark Suster’s Bothsid.es.  I also read Grantland, because it’s the smartest sports blog out there.

I’m an over the top fanboy of Vernor Vinge, a science fiction author and computer scientist from San Diego.  My favorite book of his is “Fire Upon the Deep” but the web crowd will probably find “Rainbow’s End” more interesting as it deals with the very near future and things like A/R and affiliate programs run amok.

Jyri Engestrom, founder of Jaiku and Ditto, and pontificator about  the concept of “social objects” which has been very influential in my career.

Great question, thanks for asking.  I believe strongly in hiring the best available entrepreneurial talent over the best available experience fit.  At a startup, everyone has to do bit of everything… it’s best to have talented, fearless folks who can pick up anything as opposed to specialists.  We always tell our new hires that your next stop will be your own startup.

What’s your favorite pickup basketball court in the world?

I’ve played at some fun ones – the half court games in Venice Beach are an experience, San Francisco’s Alice Marble Court has stunning views, and Rucker Park in New York is legendary, but my favorite would have to be the Las Olas court right on the beach in Fort Lauderdale.