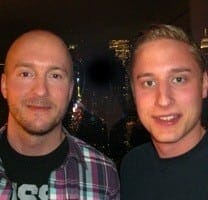 Leif & Christian are the founders of Pay with a Tweet, a platform that let’s people sell their goods for the price of Tweet. They believe that exposure is a currency that can be traded. The team that calls itself “Innovative Thunder” works as Associate Creative Directors at New York’s Digital Agency “R/GA” for clients like MasterCard and Nike. Before that, Leif & Christian were the lead interactive creative team for Activision’s Guitar Hero titles at the Ad Agency “Crispin, Porter + Bogusky”, there they were also part of the team that created Best Buy’s Twelpforce. The two met at the German agency Jung von Matt in Hamburg where they created campaigns for brands like Mercedes-Benz and the TV show “LOST”. Christian’s first career was as a marketing manager for pop and dance artists at Sony Music and Head of Dance Dept. at Warner Music in Germany. Leif had his own digital company with that he created several affiliate marketing projects as well as one of Germany’s biggest gaming networks. In their career they collected more than 100 awards and honors including Cannes Lions and a Golden Record for the German Techno Band “Brooklyn Bounce”. In June 2010 they released their book “Oh My God What Happened and What Should I Do?”, a guide for traditional ad people to master the step into the digital era that is available for the price of a Tweet and gained more than 150.000 downloads in just four months.

Right now we have some awesome projects going on at R/GA, the agency we work at. And are planning the next stages of Pay with a Tweet, as well as a project called “Wondertute”, a new way of gifting your social media friends, that launches beginning December.

1. The Digitalization of Pop-Culture.

We are both very excited about the entertainment industry and how it is changing due to the digitalization. From everything shifting to on-demand models to creating deeper stories by using multiple channels to experience them.

2. The New Independence of Creatives

Today we are able to make unlimited copies of nearly every media content with costs that a college student can take. This plus tools like iTunes, KickStarter or also Pay with a Tweet give creatives the chance to be truly independent from big distribution companies like record labels. A huge chance for every creative out there.

Less a trend but a fact. We have the awesome opportunity right now to claim land out there with ideas that define our infrastructure of tomorrow. There are no rules and everyone is a creator. Fuck Yeah.

Everybody who does things we would love to do but did them before we did. Like Fiverr.com.

We think the main thing we learned about mistakes is, if you don’t risk them, you don’t try and not trying is a mistake.

Really sorry, but every idea we could think of seemed like an idea that we might do one day. And we don’t want to share bad ideas with you people.

The founder of ChatRoulette.

What are you proud of right now?

Every quarter we give our students at the Miami Ad School, New York a real briefing of one music artist that has an album coming out. Their job is then to come up with marketing ideas around that release. We had a really great quarter and are psyched to see them present their ideas to Sony Music next month. It’s gonna be awesome.

What are you doing in your free time?

Going to the cinema. We are big movie fans, but the kind that loves huge block buster titles. Sucker Punch will be awesome, we hope. And Tron. Sorry. How could we’ve not thought of Tron first.