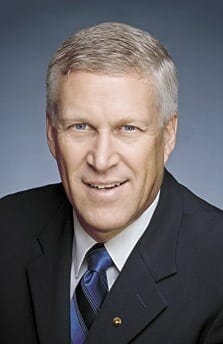 Celebrate and support those who surface issues early. Surround yourself with winners. You are only as good as the sum of your team.

Louis R. Chênevert is the former Chairman & Chief Executive Officer of United Technologies Corporation. He was elected President & Chief Executive Officer in April 2008 and Chairman in January 2010 and served in those positions until he retired in November 2014. He held the position of President & Chief Operating Officer and served as a Director of United Technologies since March 2006. Prior to that, he served as President, Pratt & Whitney, from April 1999 through March 2006.

Chênevert joined the Goldman Sachs Merchant Banking Division as a Senior Industry Advisor from 2015 to 2017 and is a member of the Business Council as well as a former member of the US-India CEO Forum. He also serves on the Board of Directors of Cargill Inc. since 2011, became the Chairman of the Congressional Medal of Honor Foundation in late 2017 and is the Chairman of Yale Cancer Center’s Advisory Board. In 2005, Chênevert was inducted as a Fellow of the American Institute of Aeronautics and Astronautics (AIAA).

Chênevert earned a Bachelor of Commerce degree in production management from the Université de Montréal, École des hautes études commerciales (HEC). He received an Honorary Doctorate from University of Montreal in 2011. He is Chairman of HEC Montreal’s International Advisory Board and a founding director and Chairman of the Board of Directors for the Friends of HEC.

Where did the idea for United Technologies come from?

As CEO of a multi-national global company, many ideas were brought with the key executives, strategic small group in a small team, with a profound understanding of customer needs and a passion to deliver game changing products in a 30-year product cycle. That approach would drive profound change combined with making acquisitions that would strengthen the portfolio.

– the F135 engine sole source position, redefining the military propulsion segment forever.
– the GTF engine development, which would be game changing for its 20% better fuel burn, 50% reduction in noise and 30% fewer parts contributing to much lower cost through its life cycle.
– leveraging the new technology key airplane in the narrow body segment was developed (Airbus A-320, Bombardier C series and new generation Embraer).
– following that, an opportunity for the core was leveraged to win the next generation of Gulfstream G500 and G600, displacing a monopoly Rolls Royce had in the large business segment for decades
– developing new X2 technology at Sikorsky that would double the speed of helicopters and change the noise signature.
– and, the acquisition of Goodrich aerospace, the largest acquisition ever at the time at $18B would change the course of history and results of UTC forever.

When I was at UTC, the focus on operational talent and engineering was extremely important to delivering ideas that would produce results that exceeded customer’s expectations and gather revenue and profitability momentum with staff support. Maintaining a focus on small teams and an operational leadership team that was given the tools, funds, and autonomy to pursue game changing products. This was followed by intense review to make sure key objectives were always achieved.

How technology and the speed of change created truly profound opportunities to accelerate momentum in our company well into the future.

It’s difficult to name one, because I see them as dependent on one another. Relentless follow-up with tremendous focus, being passionate and eternally optimistic, investing the majority of my time pushing the agenda, disregarding internal politics, and making sure the key operational executives have everything they need to deliver on the results have all played key roles in my professional success.

My first job at GM as a first line supervisor in an assembly plant on 2nd shift. While the job was an incredibly difficult assignment, this is where I learned the power of people and how they wanted to make a difference, if only management would listen to them. The employees knew how to unlock productivity and solve problems. This experience would shape my support of operations for the next 37 years.

I would keep an eye on internal politics and how they could be disruptive to extraordinary results and impact the future of brilliant leaders that would depart losing focus on execution.

Never tolerate people who don’t align with the agenda. Energy drainers slow down the progress in large companies. Typically, problems do not age well, so when you tackle any issue upfront, you allow for people to win. People love to be associated with winners.

Get the right team together to overcome obstacles, inspire and appreciate them, and always delight customers. Make sure risk taking is rewarded.

Relentless focus and open thinking combined with walking around, eliminating the roadblocks, and always thinking big. Celebrate and support those who surface issues early. Surround yourself with winners. You are only as good as the sum of your team.