Mahlon Williams – Founder and CEO of I Love Boston Sports 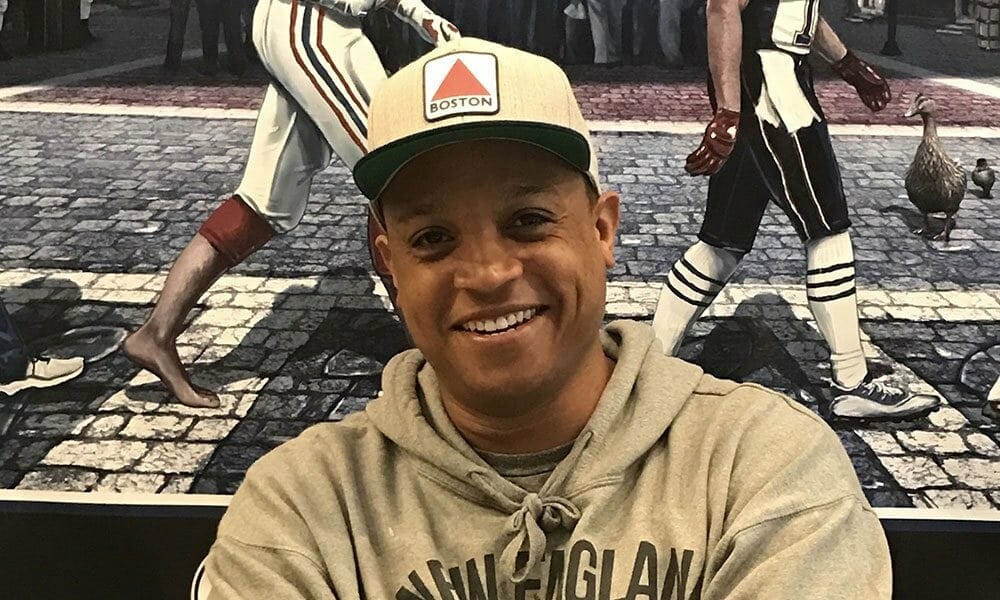 Sometimes life takes you down a path and it seems like its impossible to turn the ship around. Taking the first step is the most important.

Mahlon Williams is the Founder, CEO and Art Director for I Love Boston Sports, the creative force behind unique artwork featuring Boston sports teams, iconic players on those teams both past and present, and historical moments in Boston history for a truly unique, one-of-a-kind piece of art for Boston sports fans in the home, man cave or office.

Where did the idea for I Love Boston Sports come from?

By complete chance, I wound up on a show on Spike Tv called Pros vs Joes. On the episode I won, I represented Boston in a battle against some of the most heralded NY Professional athletes. I am a transplant to Boston. I came here for Prep School and College and fell in love with the culture and rich history. I just happened to be here and have my love for the city heightened when the Patriots broke the ice and lead us into a decade+ of domination.

Even as a kid in Chapel Hill NC, I watched the Celtics in the 80’s and watched Dough Flutie propel himself into super stardom.

My typical day begins around 5:30. I usually start my day by responding to emails and texts that I may have received overnight from the artists I have that live abroad. Often times, we collaborate on design sketches and ideas and there is usually a significant time difference. from 6:30 – 8 I am usually getting my 2 kids fed and on their way to school/camp then I head to my office which is my Braintree store. While there I generally spend 9 – 2 ordering, reviewing inventory, paying suppliers in between finalizing designs.

The most critical time for me is generally 11PM – 1AM. It is usually this time of day that I am most creative. As my day is ending, the day of some of my artist or suppliers over seas is beginning so we try to communicate as much as possible before I turn in for the night. That time of night is also very important for me creatively because most of the ideas I have come while I am staring at the ceiling at the end of a day. I look forward to the end of the day because I can not only wind down, but I can really create and refine new ideas without interruption.

An old boss of mine told me to “never underestimate the power of cool.” To me that means that just because an idea doesn’t follow the conventional path, don’t discount it because it could be the one that you build a business on. This is super evident by an idea i had for the BOSTON TEA PARTY print we did almost 10 years ago.

I had been an entrepreneur all my life. From the age of 6, I did little business that I ran myself and had to be creative in my approach to filling voids in the marketplace. When I went to college, I majored in economics (which I love) but fell in love with theater which re-connected me with my love for the arts. Upon graduation, I had a letter of commendation from the head of the theater department and my plan was to go to LA and try to act professionally. The wrinkle in the plan was that I was offered a job at a Wall St. firm and an opportunity to make a considerable living at 23. I took the cash and once you have that as part of your day to day routine, it is harder to disconnect from the Matrix.

Before I knew it, I had been working in financial services for 20 years and was misreable. I took some intense soul searching to realize that my misery was because I wasn’t doing what made me truly happy. I am passionate about “the hustle” of building a business and creating new opportunities. My wife encouraged me to write a childrens book which i did followed by several movie/and episodic treatments that were floated around to a few hollywood producers and studios. Ultimately, I didn’t have control of the process so I started a business that relied solely on me and my efforts.

When I first started making T-shirts, I went to Fenway after shedding my suit and tie and sold product in Kenmore square just like every other upstart.

The current trend that excites me and gives me the most anxiety is the direct connection that businesses can make with consumers. Its exciting because it rewrites the distribution model and it causes me anxiety because there is no longer a buffer between you and the customer. One wrong move and you can alienate a lot of people.

Not so much as a habit as it is a trait. I have severe ADHD. In school, I was always an A/B with an occassional C student. The thing that stopped me from achieving high honors was that I was bored most of the time and my reading comprehension was poor simply because my mind moved very fast and each word on a page sent me off in a tangent. I would often have to read passages 4 or 5 times because my mind would drift.

When I see or read things, its like light passing thru a prism. Immediately the current thought splinters into many connected thoughts or ideas. Over the years, my biggest advantage has been my ability to contain each tangent and see them all simultaneously. Because of this, I am able to process a lot of related ideas at the same time without having to go down one rabit hole at a time.

NETWORK MORE. Maintain and cultivate relationships with peers earlier on because these are access points to other people as you get older.

Our signature series of art t-shirts are a big hit. One of my buddies owns a huge company in New england and they specialize in art and licensing and he told me it was going to flow and it ended up being the biggest thing we ever did.

invest in yourself. no matter what, I will always bet on me and my ideas. I have told that to other people who want to start businesses but I tell them betting on yourself only works, if you are worth betting on. Never shortchange the process and know that everything matters.

One strategy that has helped me is my paranoia. I am constantly looking over my shoulder and feel that if I stop moving and creating for one instant, someone somewhere will catch up to me.

One failed business I did was when I invested my time, money and attention into an industry that was going thru transition. An old business model was being eliminated and no one knew what the new direction would be and I foolishly jumped into the pool without fully realizing the magnitude of the opposition I was dealing with. I kept throwing money at a problem. ALWAYS swim with the current.

private livery service for parents with kids. If I were in my early 20’s and wanted to start a summer business .. I would run a private livery service for parents who have difficulty shuttling their kids to and from school/camp. If you wanted to go a step further, you could do a “work hour” nanny service where you kept the kids active utilizing free parks or local activities. If one person can legally monitor up to 5 kids and each parent paid you $10/hr with the expectation that you would keep their kids active and off video games then you can really do well for yourself. include early pickup and late drop off so parents dont have to take time off work.

One of my artists was on a comic assignment and I had to reach out to an artist that had been asking me to join my team. I was reluctant to bring on any more artists because you have to keep them working even when it is slow. Needless to say, I gave him a small job for a quick design that I had been wanting to do. We ended up making well over $100K from that small pieceo of art.

I use several online cloud services but the one from adobe is really special because it allows me to create on the go and access it from any device.

Magic Johson has a book from several years ago that is a really good read. It shares his experiences in business and really shares how he had to humble himself to learn business from people who knew more than he did.

“Hustle until you no longer have to introduce yourself”

I learned that its never to late to start over. Certainly I regret not doing it sooner. Sometimes life takes you down a path and it seems like its impossible to turn the ship around. Taking the first step is the most important. It’s a GIANT leap of faith but there is so much more on the other side if you do. The mental freedom of building something of your own that you are passionate about is so much more liberating than toiling at a job for someone else that makes you miserable.