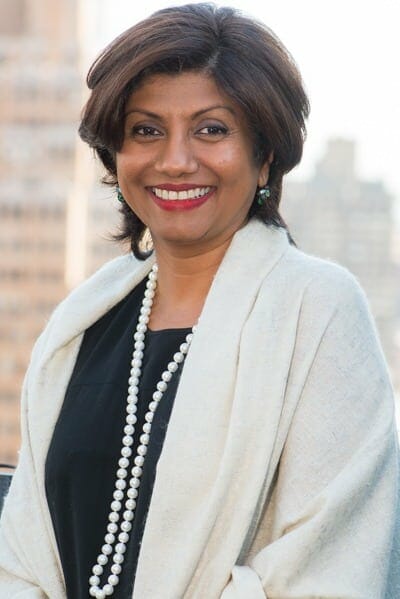 Malini Saba is one of the world’s top investors and philanthoropists of South Asian origin.

She is the Chairman of Saban, a company that has had or retains varied investment interests worldwide such as technology companies in the US, oil and gas in China and real estate in Australia and India. Malini is an impassioned philanthropist. In 2001, she started “Stree: Global Investments in Women,” a non-profit organization aimed at changing the way lowincome and at-risk women and children worldwide see themselves and their roles in society.

Inaugurated by former US President Clinton and Jordan’s Queen Noor, “Stree” provides a means for women to access healthcare, legal empowerment and provide a forum for grassroots movements to connect with public policy in Africa, Central America, India and Eastern Europe.

In June 2005, Malini donated $1 million to kick start the world’s first Heart Research Center for South Asians at El Camino Hospital, Mountain View, CA. In 2004, she toured the Tsunami ravaged areas in India and Sri Lanka and pledged $10 million to the victims of the tragedy in the island nation. Malini’s investment career began as a Silicon Valley venture capitalist during the 1990s with extensive experience investing in more than 20 technology companies, including Sycamore
Networks, Inc.(NASDAQ:SCMR), PayPal Inc. (acquired by eBay, Inc. for about $1.5 billion) and Netscreen Technologies, Inc.(acquired by Juniper Networks, Inc. for about $4 billion).

Where did the idea for your first company come from?

I wanted to invest in companies and was not able to get into a VC group. Thus I founded, Saban, a company that retains varied investment interests worldwide such as technology companies in the US, oil and gas in China and real estate in Australia and India.

I wake up at 5am. Handle conference calls with Asia as my commodity business is based out there.
By 7 am I take my daughter to school, we walk to school together so we can talk.
I walk back to the office and handle matters in USA and Europe offices.
Then back at school at 3pm to pick my kid up and back at the office.
My day is organized around meetings, but I make sure that I always pick my daughter up. I don’t believe in Nannys.
I also believe that meetings should be 45 mins, never longer.

I have always looked at market trends and done the opposite. I look at where the world will be 3 -5 years out based on what we are doing now.

I saw the opening in India in the early part of the Millennium and focused on real estate there, while most others were hesitant. I saw that the market would only explode with a rise of the middle class. I invested in real estate and retail . The returns from that risk over the last 10 years were outstanding.

Similar to the growth of the commodity market in 2005 . Similarly, I saw the potential for growth of the commodity market in 2005 and the need for the products and invested into the space. It was not an easy road, but we achieved success. We now own and operate Iron ore mines and also have invested into Agri space. I feel its a space that will never end. It will only grow. Rice is a commodity that will never slow down.

The commodity market really excites me. Its volatile but it brings great returns. just like real estate, you have to ride the wave. We own over 5,000 hectares of palm oil and thousands of acres of rice fields. Its a education on a daily basis and you are negotiating on two levels: as the operator and as the seller — both require separate skills .

I have always taken the Bull by the Horns. I am not afraid to take risks. I have always gone into countries and areas where people do not normally tread. I believe that if you have your facts and done your research you should always go for it. Never give up.Entrepreneurs are risk takers, we are a completely different breed of people. Most people don’t understand the way we think.

I have always worked for myself, but the worst experience I’ve had as an entrepreneur was actually fairly recently when we began operations in a country where the corruption was too great to fight. Things there took a very ugly turn. Because we refused to play the criminals’ games, they went after me in the media with lies in an attempt to discredit me. What did I learn from it? Never let people bully you into submission. I believe that as a woman in business I have to fight a harder a fight in these areas. There are different rules. We must carry on and never stop doing what you believe in. In business you have good days and bad days. Get up brush off and carry on. That is what differentiates success from failure. Having said that, Failure is not a bad thing, its an experience that eventually can make you more successful if you learn from it.

Nothing. I think every step I have taken to date as made me a better leader, better boss, and a better business person. I am wiser for it.

Trust your gut and believe in yourself.

All my offices are always in start up mode. I am very careful about the culture. I believe if you work for me you must want love being on level zero. You are there to do whatever it takes . Start ups have a different culture and financial expense. I am always on the ground. I always go to all the sites before my staff and I understand it. This way I can assist my staff . Most people never understand how the Chairman can walk around in the fields , or in the mines. In 25 years I have never changed that. I believe that its important to understand what your staff is experiencing and never losing touch with that.

I lost a lot of money in an investment in a different country than the one previously mentioned. Again we were faced with corruption this time we were sold phony permits which we were not aware of at the time. It lead to the closing of some mines right before we could move them via trucks. It was a long battle in the courts . It would have been easier to walk away but I don’t believe in that. We have to stand and create new law so others who come behind you have a way to go forward. We lost the war but won the fight. It took 4 years, but we finally won the land back.

LOL – as an entrepreneur all my ideas are precious.

Gosh! I don’t shop. But I love good food and good wine. I had the best meal lately in San Francisco.

Yelp , I have only just got into this. I never used it until my daughter introduced it to me.
It helps me find great restaurants.

Steve Jobs – he was a fighter. He stood his ground on what he believed in. He was thrown out of his own company only to be taken back and made it greater than before. He used all hurdles to his success. It takes a lot of self belief and vision to be on that path.