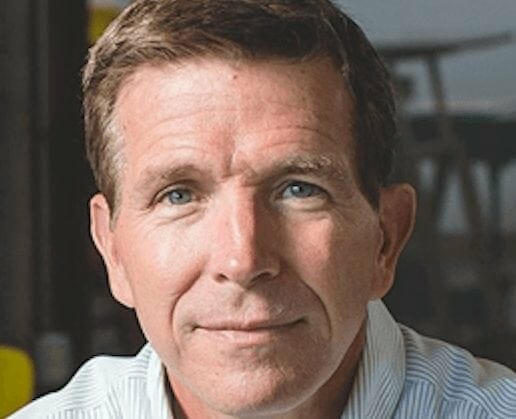 Problems are everywhere but the entrepreneur in me sees the solution in every problem or else I am willing to work until a solution presents itself.

Mark Hasebroock is an entrepreneur to the core. After selling colorful moccasins to sorority girls in college, Mark started his career at First National Bank in Omaha before becoming an early franchisee at Vic’s Popcorn and working 12 years as an investment banker at McCarthy & Company. He then returned to his entrepreneurial roots, cofounding GiftCertificates.com during the internet craze of the late 1990s. In 2002, Mark cofounded Hayneedle Inc. – a privately-held online home product retailer based in Omaha, bringing the company from zero to hundreds of millions of dollars in annual revenue. Hayneedle eventually sold to Jet.com in 2016. Between GiftCertificates and Hayneedle, Mark raised over $150M in venture capital from the likes of Sequoia Capital and Insight Venture Partners.

Mark went on to found Dundee VC (@dundeevc on Twitter) in 2010, in order to help entrepreneurs like himself find hands-on, knowledgeable capital providers that could help a startup grow from an idea through to an exit.

Where did the idea for Dundee Venture Capital come from?

I was frustrated and confused with the complicated fundraising process for growing a tech company in Omaha. I saw all sorts of brick and mortar companies raising money for run-of-the-mill ideas with limited potential for growth. But no one would invest in our company – Hayneedle – at the early stages. We were growing, profitable and needed to hire talented people.

I heard comments that we were too risky or that we were hard to understand. Additionally, I was told to come back when we had at least $1 million in cash flow. We needed $250,000 and were confident we would be able to grow ten to twenty percent each month. Still… nothing. This lead me to wonder why no one was filling this void. In 2010, I formed DVC to change that narrative.

There isn’t really a typical day for me. With a large family (my wife Jane and I have eight kids), I am used to chaos. I think having a large family has helped me with problem solving (Sorry…NO means NO) and empathy. Plate spinning becomes more like arbitrage between the sound of plates breaking and no sound. Not much in between. I try and get as much accomplished very early because the rest of the day gets away quickly.

I don’t. Really creative founders do. I think I indirectly get my energy source and inspiration from them. Their creativity and positive attitudes creep into my life. We love investing in founders that are solving problems, oftentimes so simple and obvious, in their life. They are the ones bringing ideas to life.

Founders using data to improve people’s lives is a trend that I get excited about. Phones create massive amounts of data, recording every single movement of our lives. We can capture inventory, heart rate, steps, location and everything about a person or a business can be distilled into data. Then these pieces can be built back up to help us improve our daily lives and our businesses. Look at the arc of wearable technology and the apps being built off the hardware, or even driverless cars that will eventually be able to know when passengers are impaired, healthy, hungry, excited, distracted or tired (and be able to offer up product/service recommendations for all of the above). It feels like we are on the cusp of leveraging data to make our lives noticeably and exponentially better. The big data buzzword of five years ago is now becoming a reality.

I care more about the solution than the problem. Problems are everywhere but the entrepreneur in me sees the solution in every problem or else I am willing to work until a solution presents itself. It’s what ever founder does and a habit that never weakens over time – the need to solve problems and the energy to keep going and not take no for an answer.

I was a janitor at a junior high school and there’s no way to describe how awful the toilets were. I also felt invisible. The experience taught me to treat others as I want to be treated.

I would be more patient with the deployment of our capital. Being new to VC, we underestimated just how much capital and time every company would need to succeed. In the Midwest, there’s a wide gap between the seed and A stage and almost everyone needs to raise money in between. This is one of the reasons our next fund is going bigger (from $18M to $30M) – so we can lead the in-between rounds when we know it’s working, but the A funds are not quite ready to step up and write a $3M check. In hindsight, we would have been more deliberate, but we also might have missed something that way, so it’s a tough balance to strike when deploying capital.

At giftcertificates.com, we lost control of the company as we reached for the brass ring of an IPO. We should not have done that at arguably the worst time in history to attempt an IPO (early 2000). I recommend bootstrapping your business as long as you can, then growing into it profitably by focusing on sales and revenue without running out of cash. The two golden rules of our portfolio are: selling solves everything, and don’t run out of cash. If you can do those two things everything will turn out just fine.

The one secret weapon my father in law told me 30 years ago has four ingredients:
W-O-R-K.

I sold colorful moccasins in college to sorority girls to fund a trip to Padre Island for spring break. Aim high, right? The dye bled through the moccasins to the girls’ feet and stained them all sorts of colors…blue, red, yellow. It was horrible and I had to refund or replace every pair. Lesson? Know your suppliers (they told me “You aren’t supposed to get them wet!”) and have no-questions-asked customer service.

Here’s a simple one – make a better group video or call collaboration tool. People use gotomeeting, Webex, Google Hangouts, Skype or Blue Jeans and none of them work without a hitch. It’s so simple yet apparently terribly hard to get right. But look at what Slack has done for messaging. Make it easy, simple, with a great user experience and people will pay for it.

Kindle. I take it everywhere and it is so easy to read anything at anytime.

Slack is an amazing tool that facilitates our team’s communication from Chicago and Minneapolis. It’s simple, and works without friction or over-thinking.

The Little Red Book of Selling. The basics of selling are so simple to learn but really hard to master. Everything you do daily is or can be a sale and a chance to practice so learning that art is critically important. Most people learn by doing and failing but this book can help hone those skills as well.

Some of the best in VC: