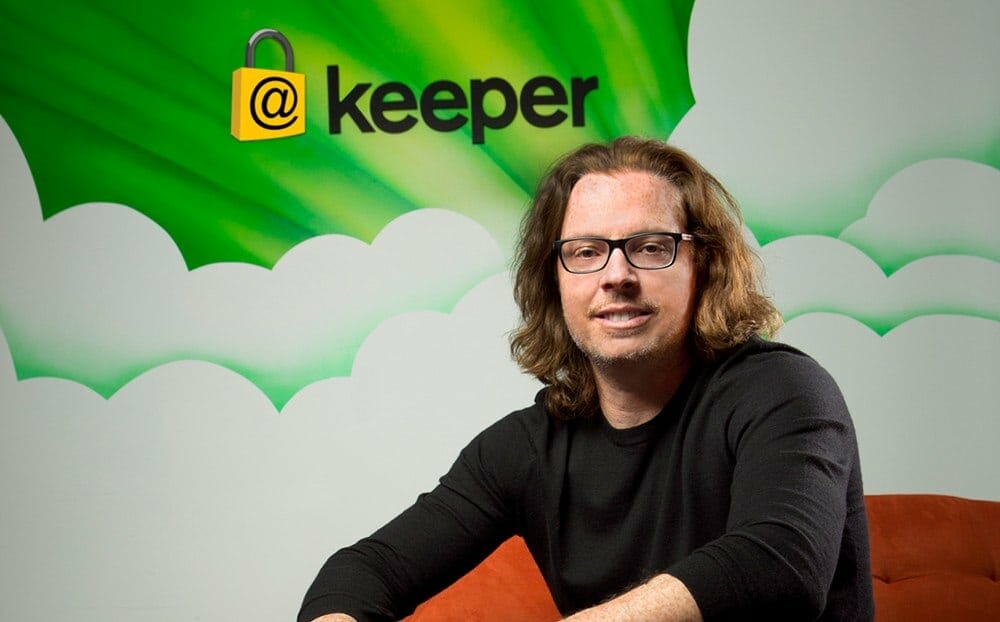 Discipline and focus. These are two habits – but they are interconnected as one in my mind. It takes discipline to stay focused and the premise of being focused is absolutely the most critical thing. I see people fail because they lack focus or give up too quickly on something.

Darren Guccione is the CEO and co-founder of Keeper Security, Inc. creator of Keeper, the world’s most popular password manager and secure digital vault. Keeper is the first and only password management application to be preloaded with mobile operators and device manufacturers including, AT&T, Orange, America Movil and HTC. Keeper’s business solution protects more than 3,000 organizations worldwide.

Darren is regularly featured as a cyber-security expert in major media outlets including CBS Evening News, Fox & Friends, USA Today, ABC and Mashable. Darren was a keynote speaker at Web Summit 2014, Techweek Chicago 2015, and as a panelist for Advisen’s 2015 Cyber Risk Insights Conference. In 2014, Keeper won the Chicago Innovation Awards and in 2016 won the Global Telecoms Business Awards with Orange for Consumer Service Innovation. Darren was recently named in the Chicago Top Tech 50 by Crain’s Chicago Business.

He started the company with extensive experience in product design, engineering and development. At Keeper, Darren leads product vision, global strategy, customer experience and business development.
Prior to Keeper, Darren served as an advisor to JiWire, now called NinthDecimal. NinthDecimal is the leading media and technology service provider for the Wi-Fi industry. He was formerly the Chief Financial Officer and a principal shareholder of Apollo Solutions, Inc., which was acquired by CNET Networks.

He holds a Masters of Science in Accountancy with Distinction from the Kellstadt School of Business at DePaul University of Chicago and a Bachelors of Science in Mechanical and Industrial Engineering from the University of Illinois at Urbana-Champaign, where he was the recipient of the Evans Scholarship and Morton Thiokol Excellence in Engineering Design Award. He was also the recipient of the Distinguished Alumnus Award presented by The Department of Industrial & Enterprise Systems Engineering. Additionally, Darren is a licensed Certified Public Accountant.

Darren is a community board member of the Chicago Entrepreneurial Center (1871) supporting the development of early stage companies and an advisor to TechStars – a Chicago-based technology incubator for innovative startups. Formerly, Darren served on the Committee of Technology Infrastructure under Mayor Richard Daley.

Where did the idea for Keeper come from?

My partner and co-founder, Craig Lurey, and I came up with the idea for Keeper on a trip to Asia back in 2008. The iPhone had launched with great success and Apple was about to unlock the floodgates on the App Store – we saw a market opportunity. At that time, no one in the industry was creating a cyber security “vault” for Smartphones. Craig had 40 hours of flight time coding the first version of Keeper for iPhone. We launched it in 2009 as a free application and the rest is history.

I would describe my day as a controlled state of organized chaos. My main goal is to keep everyone in the company focused. I spend 50 percent of my time on product and the rest of my time on everything else that needs it. I consider myself a product-centric CEO.

Executing and staying hyper-focused on the initiatives that are geared towards propelling the grand scheme are important. Rome wasn’t built in a day – I’m a believer in breaking things down into a series of steps and deadlines – then cranking on them while mitigating distractions. The ability to stay focused is probably the hardest part of being a CEO every day. It is very easy to get distracted – things come up all the time that aren’t part of your plan. You have to have to ability to resolve errant, but important, issues quickly or simply say “no” or “not now.” Sometimes, I will let people know that “we are never going to do that. It’s not the right move for us.”

Trends are concerning to me because they trap companies into thinking that production is more important than innovation. The truth is that one cannot exist without the other. I never want to be in a business that is mostly dependent on making it faster and cheaper than the others in a market. Commoditized markets are for well-established companies with massive balance sheets and money to burn if they wind up being wrong. The thing that excites me are problems or voids inside large markets.

Discipline and focus. These are two habits – but they are interconnected as one in my mind. It takes discipline to stay focused and the premise of being focused is absolutely the most critical thing. I see people fail because they lack focus or give up too quickly on something.

I’ve been an entrepreneur for over 30 years. On the way to starting my first company when I was 27, I never considered any of my jobs as “bad.” I took positives from them but knew pretty quickly that I was going to go off on my own – I felt constrained and knew that I would find inner peace creating something great.

No. I seed funded every business I’ve ever started and will do it again. A business starts there – with your own “skin in the game.” People that put up their own wallet tend to be more focused, work harder and have a passion for the business unlike any other.

Build a great product and have great service – it starts here. If you do these two things right, you will be well on your way and the need for a massive marketing budget, to get you out of the gate the first year, will be mitigated. Great products create virality and buzz.

Again, I would say build a great product and offer great customer service. Without these two things – business growth suffers.

I have failed so many times – it was the methodology for my success. When you start a business, you go through what I call “the spanking line.” You will make lots of mistakes and you will fail. I think one of the things I’ve gotten better at with age is to fail fast. When you see something not working – listen to your gut. Stop, pivot and try something new. Successful entrepreneurs rarely strike gold right out of the gate. Every great one that I know of has battle scars from failing a bunch of times. The key is to keep going – no matter how hard it gets – if people doubt you, you have to be able to be strong and ignore it – in the realm of the overall universe, they don’t matter…only your customers and real stakeholders matter.

I think the Internet of Things (IoT) is going to be huge. If I was to start another cybersecurity company, it would probably be something in IoT. There is currently no industry authentication and security standard for products in the IoT space. Every OEM out there has their own way of securing, or trying to secure, the IoT products they create, which launch every week. There will be over 50 billion IoT devices in circulation by 2020. This is a massive market opportunity.

The $100 that I recently spent while with my wife and kids on vacation. It was spent on making memories with them and for them.

I like products that honor people’s time and security. Obviously I’m a Keeper user – I can’t live without it. I also like Uber/Uber Eats, Amazon, Skype (for audio) and Slack (for workflow). I use tons of apps – those are a few that come to mind.

The Art of Worldy Wisdom by Baltasar Gracian. I love that book. It makes you think AND feel – the act of feeling and the emotional intelligence behind it. It’s thought provoking and can be applied to many areas of life, including business.

My wife and kids are my greatest source of energy and inspiration. My partner, Craig Lurey, is a genuine, ingenious and unique person who has insane technical abilities.