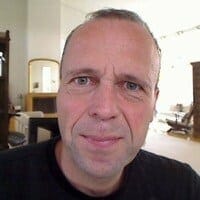 Markus Stolz is today a leading authority on the wines from Greece. In the beginning of 2009 and after having spent most his career in finance, he decided to let his passion rule his professional life and became engaged in the Greek wine world. He established himself as an independent expert over these past 18 months, without any financial support from the Greek wine industry or governmental trade bodies. He is German, married to a Greek and they live with their 4 children in Athens since 2003.

Markus is the author of elloinos, one the most respected information sources on Greek wines. He also regularly contributes guest articles to well-known sites like Palate Press and Snooth and has his own column on the blog of one of Germany’s most influential winemakers . He has been interviewed live on a Greek wine radio show , and appeared as a guest at Gary Vaynerchuk’s Wine Library TV, Episode 866 . He spends a good part of the year at the wineries, and has built up a strong network of connections within the Greek wine industry.

When he started out his new venture he was astonished at the lack of interest the wines from Greece received in the export markets. Traditional campaigns like sending out letters to wine merchants abroad did not bare any fruit. Markus soon started exploiting the power of social media a few months later and has since successfully built up his brand on a global basis.

After having raised public awareness about Greek wines abroad and primarily in Germany, I am now actively pursuing to make Greek wines more widely available. I have just launched 600bottles, which is more than a traditional online shop for end consumers. My vision is for 600bottles to become a hub for importers, wine merchants, the gastronomy and consumers alike. This project currently focuses on the German market, but will be expanded in the future. In the beginning, I offer wines from producers that are not yet broadly distributed by existing importers/merchants.

Consumer demand for wines is shifting quickly towards well made, solid quality wines that can be enjoyed at fair prices without being overly complicated. Greek wines have witnessed a tremendous improvement of quality over the last few years, and today many are able to offer outstanding value-for-money.

At the same time, there is also rising interest towards niche wines. Consumers are willing to seek out indigenous grape varieties in order to expand their palate. Greece is blessed with a sheer number of indigenous varieties that are truly distinctive and unique.

Mobile phones and the Internet are changing our lives at a breathtaking pace. The ability to reach out and connect with other people offers opportunities that were unthinkable just a few years ago. Humans are always interested in listening to interesting stories. Now these stories can be told to a larger audience than ever before.

When I have a new idea, I only apply basic planning, as it becomes increasingly hard to plan too far ahead in today’s dynamic environment. My focus really is on the execution, and this typically involves the human element, since for it I engage key contacts from my network. One of my key philosophies is to bring social media contacts into real life, this means striving to meet face to face with as many of these people as possible. The amazing thing in today’s world is how many contacts are within one’s reach, but in order to really benefit from them, they must be converted from virtuality into reality.

In my past career I have at times been dependent on single relationships. Always spread out, do not focus or rely too heavily on anyone. While it is important to foster key relationships, one should not forget that they are dynamic in nature. Common interests and goals can diverge over time. Never stop putting in the effort to continuously expand relationship networks.

What is one book and one tool  that helps you bring ideas to life?

It is without a doubt Twitter: Its power is not limited to connecting with people ­ there are so many influential and great voices to be heard, many ideas manifest themselves by simply listening to what others have to offer. When wisely used, it is an invaluable tool.

There are many countries where the current revolution of social media is still lagging behind. I believe this is a stunning opportunity for entrepreneurs who have gathered expertise in the field to take advantage of. An example out of everyday life would be Greek banks, which have not yet entered the social media community at all and certainly would need guidance to maximise its value. The same holds true for other industries and many more countries.

How can you remain independent whilst having a commercial interest?

I value my independence very highly. I have made a conscious decision to not accept payment from wineries or trade bodies. I am authentic ­ whatever I write, I believe in. When I feature a wine estate, it is solely because I appreciate their work, not because I receive payment. The same holds true for the wines ­ when I export wines to Germany, it is because I believe these wines are exciting and deserve recognition. I believe long-term business relationships can only last if one is willing to give before receiving. I want to do things differently, and believe that this is one of the main reasons people are interested in hearing my story. What is my business model? I am building up a whole new market and I want to be a viable alternative to the old gatekeepers.

Do you like living in Greece ­ being German, the cultural differences must be huge?

Greece is a fantastic place to live in, and I am proud to call it my home. Greeks are amazing people, they are lively, outgoing, temperamental, chaotic in their own way but have big hearts and value the family above all. I treasure this mad combination, although it did take me a couple of years to adjust. It is never boring here, and people embrace life to the fullest even during tough times.