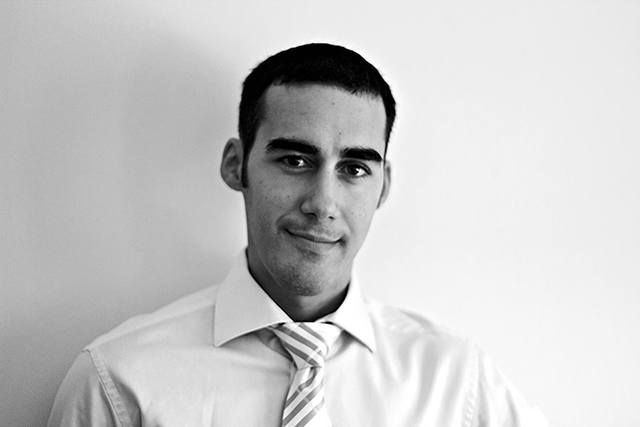 [quote style=”boxed”]I’d learn more about coding so I could do more of it myself, but also show more restraint in anticipating problems and throwing everything but the kitchen sink to solve them before being sure that they actually exist.[/quote]

Mehmet Fidanboylu  is a neuropharmacologist, musician, graphic designer, and the EQ of Marblar’s founding team. Marblar is a brand new concept shaking up the transfer of science into real-world uses with the help of crowd-sourcing.

Having spent some time as a bench scientist in big pharma, and then a PhD researcher, Mehmet had been working towards building a career as a research scientist. But throughout this time, and from a young age, Mehmet has had an entrepreneurial niggle that was difficult to suppress. From making and selling mobile ringtones in the school playground to freelancing as a graphic designer on top of his academic pursuits, Mehmet finally gave into the voice in the back of his head after securing seed investment for Marblar with CEO and co-founder Dan Perez in April 2012.

As a registered inventor on two patents for new ways to target drugs to the brain, Mehmet has had a taste of taking research out of the lab and onto the journey to development. Mehmet takes this innate love of science and passion for elegant design and applies it to Marblar at full throttle. Back when spare time was a thing, Mehmet enjoyed photography, snowboarding and playing jazz piano and saxophone.

I recently gave up searching for a machine that adds more hours to the day, and now I focus on trying to finish up my PhD at King’s College London and working on Marblar. Marblar’s mission is to become an army of creative thinkers working towards a common goal of realising the promise of science. Marblar posts dormant scientific discoveries as challenges and asks its users (Marblars) to ‘use their marbles’ and find new possibilities for the discoveries. Marblars work together to breathe life into science that would otherwise gather dust in a patent office’s archives.

Where did the idea for Marblar come from?

The founding team for Marblar came together in their roles volunteering for the Oxbridge Biotech Roundtable – a student-run entrepreneurs organisation internationally serving over 5000 professionals and students in the Life Sciences sector. It was here that we cut our teeth in running an organisation and pitching clients. In running OBR we learned that the process of commercialising university research (Technology Transfer) hadn’t changed much for over 50 years, and that young scientists throughout the world were craving a creative outlet where they could really have a say in how cutting-edge science is used. Why not combine the two and re-imagine Technology Transfer as an inclusive and fun playground for scientists that is more in line with the 21st Century?

For the past 10 months I’ve basically been on Terminator mode, stopping for nothing. Being a student entrepreneur isn’t a walk in the park. I can be running my experiments in the lab one second, and then nipping out to find a quiet room to speak with my developers the next, before running to the other side of London to a creative meeting with the rest of the team and our branding advisor. Thankfully now, my lab work has simmered down, and I have the daunting task of writing up a 400 page thesis, but that does give me a little more flexibility in terms of time. The relentless pace continues though. I will be working on Marblar full-time once I defend my thesis in January 2013.

On a personal level, one of my roles within the Marblar team is to conceptualise the discussions we have as a team and get them down in pixel form. My canvas is Adobe Photoshop and Illustrator, and my tool of choice a MacBook Pro 15″ with Retina display (which I heart, by the way).

At Marblar’s level, our whole purpose is to realise the promise of scientific discoveries and inventions. These could be emerging technologies that are literally so bleeding edge that not even the inventor knows what to do with them, or they could be technologies that are gathering dust in a forgotten portfolio of intellectual property. Either way the goal is the same – what problems do these technologies solve? What could they be useful for?

We’re all familiar with the power of fresh perspectives, and how two heads are better than one. At Marblar we put these concepts on steroids; using the power of crowd sourcing and the internet for the benefit of science.

Mobile connectivity and the cloud. It’s a cliché, I know, but I love constantly being connected to the interwebs and seeing the creative new ways developers and engineers are finding to make us better connected. The iPad with 3G has completely changed when, where and how I work and play.

I worked in the Accident & Emergency clinic at my local hospital for 3 weeks. It wasn’t a bad job, just not for me. I learned that my interest in science stops way before having to watch the insertion of a urinary catheter.

I’d learn more about coding so I could do more of it myself, but also show more restraint in anticipating problems and throwing everything but the kitchen sink to solve them before being sure that they actually exist.

Know who your customers are, talk to them, and make sure you’re doing everything to address their needs, and nothing to address what you think they might need, until they actually need it. Make sense? It does in my head!

Not realising that I wanted to be doing this sooner. It was partly family expectations, and partly my own ignorance that was subduing my entrepreneurial streak. I didn’t really overcome it, it was always there, it just took over on its own.

A mobile app for tracking your speed and path when skiing/snowboarding. I wanted it to start tracking via GPS when it detected a decrease in altitude so you didn’t waste power when on lifts, and it would kick in when you got off the lift and started the descent. Unfortunately someone had already beaten me to it with an app called ‘Powderful’.

I was really bad at art and design classes at school. Oh, and I used to get sent out of Biology class for messing around a lot too. At a school reunion a couple of years ago my old Biology teacher refused to believe I was doing a PhD in medical research.

Asana keeps me organised, Early Edition 2 for iPad shows me personalised news on the go with a beautiful interface, and Prezi lets me deliver fun and engaging presentations.

I don’t get to read books as much as I used to, and nowhere near as much as I would like, but if I had to name one that’s had a real impact recently it’s gotta be ‘The Laws of Simplicity – Design, Technology, Business, Life’ by John Maeda.

I just saw a stand up comedian give a talk at a Hacker News conference – Sanderson Jones. He sells all of his tickets by hand, in person. Check him out:

My dad. He taught me how to work hard and work smart, always pushed me to do the best and be the best. I definitely wouldn’t have achieved half of the things I have if it wasn’t for the support both my parents have given me along the way.