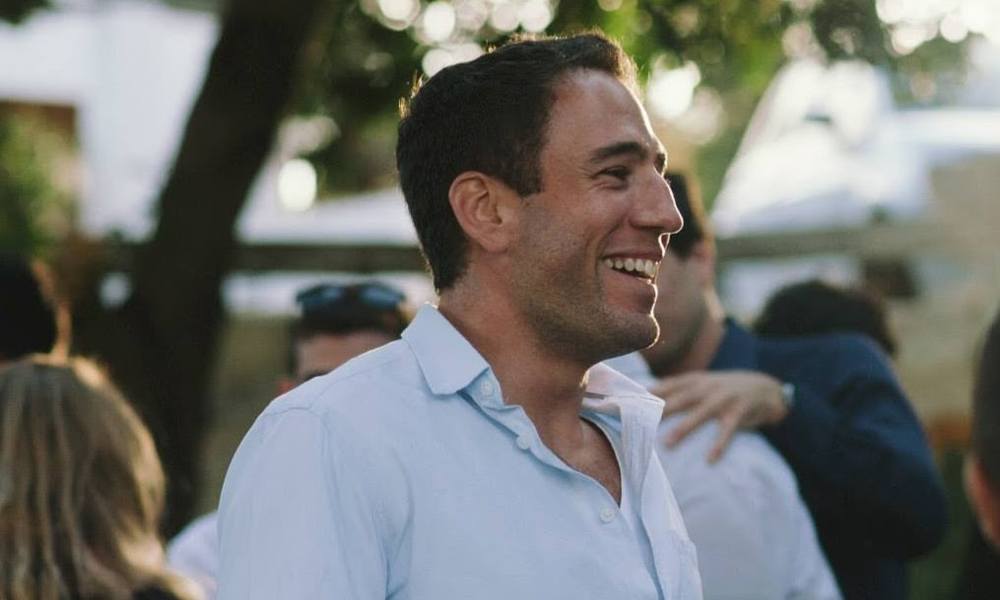 Keep evaluating your goals. Then make the time to sit down and compare what your life looks like and whether it’s congruent with the goals you set.

Michael is the CEO of Retruster, a company built to protect people from phishing and fraudulent emails. Retruster protects companies and individuals across the globe, using the latest in artificial intelligence and machine learning to stop malware, ransomware, data loss and fraud way upstream.

He now lives on the Mediterranean in the bustling city of Tel Aviv, where together with the team he runs Retruster with the aim of bringing internet safety to everyone.

Where did the idea for Retruster come from?

I was working as a CFO at a company that had suppliers in China. Our CEO was at the factories negotiating deals, and I received an email from him to transfer money to a new supplier’s account in order to get big discounts. We made the transfer – except a couple days later, in a conversation with the CEO, we realized there was no email. He never sent it. Someone had researched our organization, faked his address (really easy to do, by the way), and sent me the instruction. I was blown away that none of our software stopped this from happening, and when I looked into this more deeply, realized that this is a global problem that costs companies and individuals billions of dollars. I got together with some friends and we started Retruster, to make sure the same thing doesn’t happen to other, good, people.

I like waking up early, grabbing a good cup of coffee, and reflect and pray while it’s still cool and quiet. Then a quick workout and planning out the day, together with the team.

The energy you bring to ideas, and the vision you present to others, are key to bringing ideas to life. More often than not, bringing an idea to fruition will require others to buy in to it, which in turn means that it has to be exciting, compelling, and offer some kind of challenge.

Artificial Intelligence. I think this has the ability to bring humanity forward in a giant leap, much like the internet did when it first arrived. Some people think it’s over-hyped, and in some ways they’re right; after all, AI has been around in some shape or form for many years (who remembers Deep Blue versus Kasparov?). I think the combination of AI, big data and increased computing power will start to make its presence felt in very tangible ways. For example, I can’t wait for cities to be exclusively made up of autonomous vehicles. With so many needless, tragic road deaths every year, this trend could arrest this almost immediately (forget the media circus around the current tests and accidents, as sad as they are. I trust a computer more than I trust a human being behind a wheel). At Retruster too, Artificial Intelligence is a core part of what we offer. Human beings just aren’t capable of doing the millions of calculations necessary to produce results, and are subject to moods, fatigue, and a number of behavioral biases (if you haven’t yet, read “Thinking Fast and Slow” by Daniel Kahneman). It’s the future, and it’s awesome!

I don’t read the news during the day. I’ll check it once in the morning, and then again at night, but by avoiding it keeps me away from a black hole of non-productivity.

First figure out who you are, before you jump into a career. Ask yourself tough questions, and work out what turns you on, what you’re passionate about, what you would love to be doing. I jumped into accounting and finance, but after a time I realized that I was more passionate about starting and running a business. I wanted to help people, and Retruster was a great opportunity to do just that.

You can achieve more while doing less. Being “busy” is not necessarily something to be proud of. While a lot of people agree in theory, in practice there are a lot fewer who are living this. Tim Ferriss’ 4-hour Work Week made a splash at the time, but most people I know work from 8am-6pm, come home, and keep working. Or at least keep checking emails on their phones or thinking about work. I’m not saying it’s easy – and I definitely am not the best example – but it’s something that’s counter-intuitive that I really believe in.

Keep evaluating your goals. Then make the time to sit down and compare what your life looks like and whether it’s congruent with the goals you set. I find the goals don’t change much, but often we get blown off-course in terms of our day-to-day living. Do this as often as possible.

Being different. Seth Godin talks about the Purple Cow, and it’s so true. You have to stand out. We sent phishing emails to a number of people to prove the need for our solution. Sure it probably irritated some of them, but it got results. (Disclaimer: we immediately let these people know that these were not real emails. Do not try this at home)

Not pivoting early enough. The original idea was a biometric service to verify yourself to other people. Great idea, even the execution was elegant, but people just weren’t going to use it. I kept pushing for the idea to succeed, despite the market’s obvious reluctance to take it on.

Always wanted an app that wakes you up with powerful, inspirational and motivational quotes. It may exist. If so, well done to that guy or girl. If not, go for it, I’ll be your first customer.

Personally, it would have to be a dinner for my wife and I. Professionally, I’d say pizza for the team after our latest release!

I like Noisli. It helps me focus, cuts out background noise and calms me down.

“Living the 80/20 Way”, by Richard Koch. You know those books that you want to say, “Trust me, just read it”? It’s one of those. It will put things in perspective, give you great practical tools, and totally change the way you think.

“Whether you think you can or you can’t – you’re right”. Dubiously attributed to Henry Ford, of who I am not a fan, but probably originating much earlier in history, perhaps by Virgil in “The Aeneid”. Powerful quote speaking to confidence, self-belief and the power of the mind.

– Always be open to new ideas. Sometimes your worst day can end up being your biggest opportunity.
– Get a good start and attack the day early. Take time to plan, and make sure your team is involved.
– Rarely can you make ideas a reality alone. A team can, however, and your job is to motivate with a vision, direction and context.
– Everyone has their “productivity weakness”, and you probably know yours. Whether it’s news or social media, avoid it during your peak productivity times.
– Take the time now to figure out what you’re passionate about and what excites you. This will pay off exponentially in future.