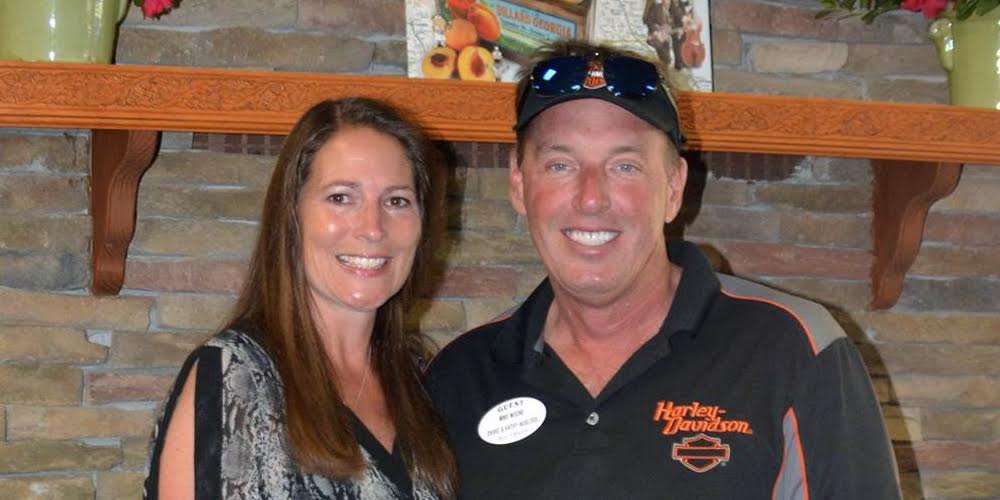 Don’t be afraid of change. If something’s not working, find a better way.

Mike and Trudi Moore are the owners of Challenge Coins 4 Less, and our parent company TJM Promos. Starting with two employees in 2004, they’ve grown the company into the multi-million dollar success it is today. Yet they’ve managed to maintain a family atmosphere that informs everything we do.

Mike and Trudi are both native New Yorkers, but they didn’t meet until their families moved to Florida. Both describe their meeting in high school as “love at first sight” – well, with a little help from another boy Trudi had been dating. They married in 1984, and have one son, Josh.

Mike was born to a family of entrepreneurs. Both his father and grandfather ran their own successful businesses. After high school, he went to work for a machine tool business. Starting as a shipping clerk, he worked his way up to assistant manager.

Meanwhile, Trudi began her business career at Martin Marietta as an industrial engineering technician. She later moved on to a printed circuit board company, and after that, became financial controller for SIMCOM, an Orlando-based flight simulator training company. The company started with 60 employees, a number that more than doubled by the time she left.

“I learned all the things that they did to make that happen,” she said. “You have to shift gears to make that next move. It has to be scalable.”

Mike stayed with the machine tool company for 16 years, but when it sold, he knew it was time to make a change. “I always knew,” he said, “ I was going to be in business for myself.”

So he started a cutting tool company, similar to his ex-employer. Unfortunately, the former employer claimed he violated a non-compete clause and sued in federal court. Without the resources to fight the lawsuit, Mike took a job at a promotional products company selling custom embroidered patches.

He proved a fast learner. After a year and a half, Mike and Trudi set out to form their own company. They had a clear vision for the business: it had to deliver top quality products and outstanding customer service. It had to be scalable. And it had to be a place where good people would want to work.

“Let’s make the atmosphere as pleasant as we can,” was Trudi’s motto.

With that, a company was born. Today, Challenge Coins 4 Less’s parent company employs more than 50 people, and offers more than 800,000 promotional products. We have had the honor of producing custom military challenge coins for every branch of the U.S. Armed Forces. Mike and Trudi’s dedication to excellence stands behind everything we do.

When not at work, Mike and Trudi enjoy motorcycle riding, boating, fishing and traveling in their RV. They’re active in their church and with Stirrups ‘n Strides, a therapeutic equine riding program.

Where did the idea for Challenge Coins 4 Less come from?

It grew out of our custom lapel pin business. The challenge coins became so popular that we created a separate website. Once we did that, the business really took off.

There’s no such thing as a “typical” day at the moment. Right now, we’re busy expanding the business into some exciting new areas for us. We’re often in meetings to plan our next move and build on success. The key is to not let the meetings take over everything else. There’s a time to meet and a time to act.

We’re fortunate to have a great team in place. We’re open to new ideas from any of our employees, and we strongly encourage creativity. We don’t have a large bureaucracy, so we have a lot of flexibility. if someone wants to introduce new products, new production methods or anything else, we can do it quickly.

Insourcing. It’s so exciting to see jobs coming back to the United States. We’ve greatly expanded our range of U.S.-made products recently.

Constant networking and brand promotion. Every person you meet is a potential customer. Don’t be obnoxious about it, but stay alert for opportunities to promote the business.

Who would disagree with me? (Trudi, with a smile)

Don’t be afraid of change. If something’s not working, find a better way. If new technology or new methods come along, investigate, then invest. Staying in one place invites stagnation, not growth.

From the start, we’ve done our best to create a positive atmosphere. We all spend so much time at work, so it should be a place we enjoy. We work hard, and we reward hard work, yet we also are part of a family. Respect your employees, treat them well, and your business will grow.

Our first company. After 16 years working for someone else, we started a cutting tool company. Mike’s former employer sued, alleging breach of a non-compete clause. Without the resources to fight the lawsuit in federal court, we had no choice but to shut down.

But we never gave up. A year and a half later, we were ready to start again, on our own terms. We worked night and day, mortgaged everything we owned, maxed out our credit cards, and just kept going. And here we are, 13 years later, with a multi-million dollar company that employs nearly 60 people. Don’t be afraid to fail, but never, ever give up!

Family time is important to us. Dinner out with our son Josh and his wife Shannon.

What is one piece of software or a web service that helps you be productive? How do you
use it?

We depend on a proprietary database program that was developed by one of our employees. It’s an integral part of our sales process, order tracking, billing, production and shipping.

“Even This I Get to Experience” – Norman Lear’s beautifully written autobiography, detailing his 90+ year life, particularly his entrepreneurial experience running production companies and
creating some of the iconic television shows of the 1970s.