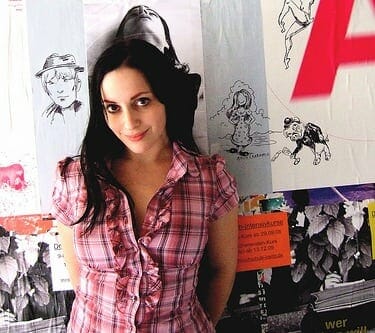 Molly Crabapple is an award-winning artist, author, and the founder of Dr. Sketchy’s Anti-Art School. Molly learned to draw in a Parisian bookstore. She later drew her way through Morocco and Kurdistan, and once into a Turkish jail. She’s developed her trademark Victorian style based on a fascination with ambition and artifice. Remember, the devil’s in the details.

Molly has drawn for the New York Times, Wall Street Journal, Marvel Comics, and DC Comics, and has illustrated over a dozen books. She’s also turned her talents into giant theatrical backdrops, parade installations, burlesque posters, and gallery shows around the world. Molly is also the creator of Dr. Sketchy’s Anti-Art School, an international chain of alternative drawing salons that take place in over a hundred cities on five continents. A business case study and a media darling, Dr. Sketchy’s has received hundreds of media profiles and changed the way life drawing is done.

I’m slaving away drawing curlicues for The Puppet Makers, a webcomics series for DC Comics created by me and John Leavitt. The Puppet Makers is a murder-mystery set in an alternate historical Versailles. Think Blade Runner meets Dangerous Liasons.

I’m obsessed with the flashmobby, wish-fulfillment immediacy of Twitter. I love magazines like Coilhouse that are showing how print, as print, can be done right. And artists smashing the high/low divide never cease to thrill me

I just do things. The time one spends talking about a project is better spent doing that project

When I first started out, the taste of being young and powerless was so fresh in my mind that I tried to do EVERY opportunity. Everything! What a fantastic way to burn yourself out. I’ve learned to be more selective over the years, but I still have to train myself to focus more on the big picture and less on the details.

The worst thing an organization can have is the useless Higher Up. The vice president of muckety muck who collects a fat salary and deliberately avoids decisions. These people will kill the spirit of innovation in your company, frustrate talented employees, and will make freelance innovators and creatives not want to work with you.

What can you recommend to young artists who dream of making art their livelihood?

Be these three things to a large degree: persistent, opportunistic, motivated. Art is a brutally competitive field; you have to work hard to make a go at it. If you have trouble staying motivated to do art, it’s better you do it as a hobby than a profession.

If you had to put everything you do right now in a drawer and do something else, what would it be?

Middle Eastern studies student. I spent years learning Arabic, and damn have I forgotten it.