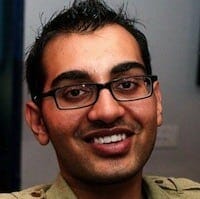 Neil Patel is the co-founder of two Internet companies — Crazy Egg and KISSmetrics. Through his entrepreneurial career, Neil has helped large corporations like Amazon, AOL, GM, HP and Viacom make more money from the Web. By the age of 21 not only was Neil named a top 100 blogger by Technorati, but he also was one of the top influencers on the Web according to The Wall Street Journal.

I am currently working on my new startup that I co-founded, KISSmetrics. We recently just launched a new KISSmetrics product called KISSinsights that I am pumped about.

You execute! That’s the key to bring ideas to life. If you can’t execute, then your ideas won’t be worth anything.

I love the non-profit world. Hopefully if I can make enough money through the next 10 years, I’ll be able to focus on non-profits.

I’ve spread myself too thin way too many times. This has caused many of my businesses to suffer. I’ve learned that you need to focus all of your energy on one company if you want to create something big.

Someone needs to buy Flickr from Yahoo and turn it into a much larger company.

I love “The Art of the Start.” It encourages me to get off of my ass and do something. As for software, Basecamp has been great at helping me get things done.

Tell me something that most people don’t know about you?

Every time I walk into a store, the first thing I try to do is calculate their revenue and profit. I don’t know why I do this, but for some reason numbers are always running through my brain.

I’ve been working so hard for the last 10 years, that I kind of need of break. I don’t want to stop now, but hopefully I can build and sell a big enough business in the next five years so that I don’t have to work anymore.