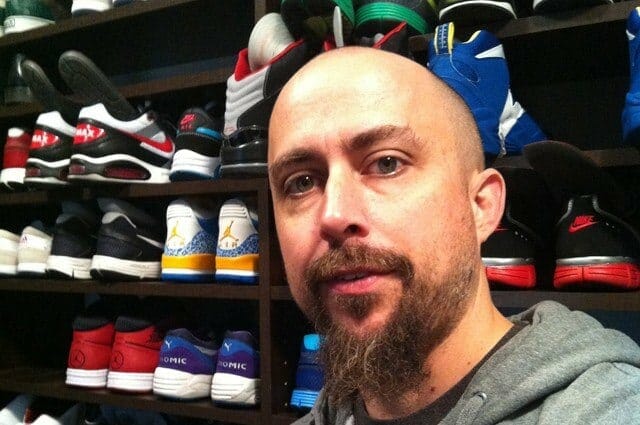 [quote style=”boxed”]Dream and doubt. Pretty sure I’m doing one or both of those at any given moment.[/quote]

Nick Swinmurn first discovered his entrepreneurial spirit as a teenager when he launched a hometown bicycle club and a tennis club, while simultaneously trying to convince his parents to open a surf shop. Nick graduated from UC Santa Barbara in 1996 with a degree in film. During a job at Autoweb.com in 1998, the idea for Zappos.com hit. Looking for a new challenge, Nick left Autoweb and took his entrepreneurial spirit to the next level by launching Zappos. CEO from 1999 to 2006, Nick left Zappos with the desire to start a niche clothing brand from scratch. His brand, Dethrone, was founded in 2009 and is now one of the most recognizable clothing brands in Mixed Martial Arts (MMA) and racing apparel. As a brand-loyal consumer and brand owner, Nick noticed something missing in the industry: a way for brands to build relationships with their customers and reward them. To fill this gap, Nick Swinmurn founded RNKD in 2011.

I’m still working on my clothing brand, Dethrone, as well as my newest company, RNKD, which launched in November 2011. I launched RNKD with the hopes of finally connecting brands directly with their most loyal customers.

Where did the idea for RNKD come from?

The idea for RNKD came from my experience as a consumer loyal to certain brands coupled with my experience as a brand owner. As a brand owner, I wanted to know more about the people wearing our clothes, specifically those who purchased Dethrone from our retailers and be able to communicate with them on a more personal level. As a consumer, I felt like the fact that I wear Nike shoes everyday should mean something to Nike, more so than someone who just likes Nike but doesn’t own or wear them.

If you weren’t working on RNKD, what would you be doing?

Working on a new idea(s).

I start most days by taking my son to daycare. It’s 45-minutes round-trip so it gives me time to catch up on phone calls. I recently discovered Bikram yoga, so from there I either head to yoga or straight to breakfast at a diner. While eating, I catch up on emails/blogs. After breakfast, I arrive at the office to complete whatever is on the day’s to-do list. On non-yoga days, I work out in the office gym in the late afternoon, rush to pick up my son from daycare, meet my wife for dinner and then head home to catch up on emails and create the next day’s to-do list.

I start by telling a few people about it to see if they seem excited or are lukewarm. If an idea survives a couple of weeks of waiting to find the big “aha, of course that won’t work!” moment, I usually start by trying to find a name to attach to it. My brain then sees it as something tangible. Once it’s tangible, the next step is asking if  it pass the money test, meaning asking myself if I am committed enough to pay a developer or designer to bring the idea to life.

I get excited by convenience, which I guess has been the dominant trend of the Internet all along. Still, lots of things can be made more convenient, though.

Selling vacuums door-to-door. I learned by watching my boss that leaving a pile of dirt (that you created during a demo) on someone’s floor when he/she wasn’t willing to buy a machine was probably not a way to create good buzz.

Dream and doubt. Pretty sure I’m doing one or both of those at any given moment.

I held the World Series of Speedquarters in 2005 and 2006. If I was fresh out of college, I’d for sure be in a van driving around the country organizing Speedquarters events. Who wouldn’t? I have the Speedquarters trademark so if anyone decides to do it, kick me some royalties!

I like How to Get Rich by Felix Dennis. When I need to be re-motivated or inspired, I read a few pages, which usually gets my brain spinning out of control. It’s a fun read that reminds you the only thing stopping you is yourself, while also hinting at being careful about what you wish for.

I’ve been glued to Pearl Jam’s station on Sirius for the past few months.

I’m most interested in the fighters Dethrone sponsors and the reporters who cover the Warriors.

Right now it’s my 3 year old son. The idea of not being intimidated by people twice your size or worried about the fact that almost everything around you is too complicated to understand but who cares is inspiring.

How did your career evolve from studying film to founding Zappos?

After college I got a job at Autoweb.com and was immediately inspired by the “anything is possible” attitude at the time. The founders were close to my age so I figured if they could do it, then I could too. I left Autoweb in 1998 with the idea for Zappos, a fan rewards program for pro sports teams and a portal for college students called 4students.com. Shortly thereafter,  a company in Boston named Student Advantage heard about the student site and offered me a job running it under their umbrella in Boston. I accepted the job. When I flew home and told my parents I was moving across the country, my dad said it sounded like a great opportunity but wondered why I would want to build something for someone else when I had just left my job to start my own company. I called them back and turned down the job. Instead, I took a stab at Zappos.

What do you like to do in your spare time?

I like to spend time with family and friends, especially my wife and son. I’m a diehard Golden State Warriors fan so I spend a lot of time either at games or watching games on TV; too much time if you ask my wife. I need to exercise regularly to stay sane, which I enjoy too.