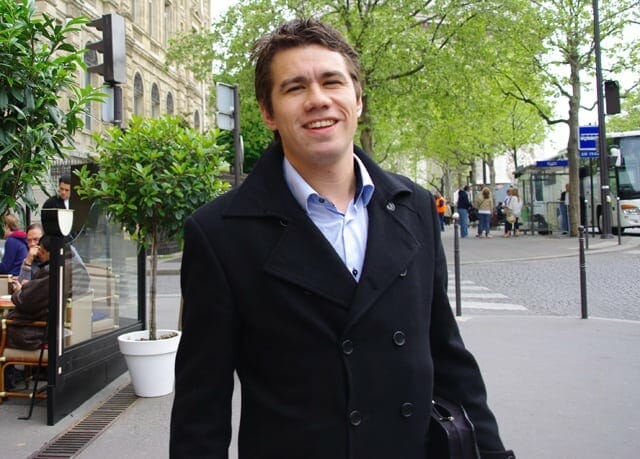 [quote style=”boxed”]I would recommend talking as often as possible with other entrepreneurs to share impressions, tips, fears and ideas. It has helped challenge my ideas, find solutions to my problems and move on. When I am in doubt, it is great to learn what others did to get beyond their issues.[/quote]

Nicolas Kalpokdjian is a 27-year old entrepreneur. After creating his first consulting company focused on both hospitality and the restaurant industry in Paris, he had the intuition that restaurant owners would be willing to lend him their restaurants during closed days to organize cooking lessons and special events. He decides to launch Restolib’, inspired by the bike-sharing service in Paris, a brand new concept aiming to bring together a passionate chef, sommelier or designer with clients eager to share a convivial moment in a cozy place.

Kalpokdjian was determined to overcome the hurdles set by common thoughts that a restaurant owner would never lend his/her place to a stranger. “Try, ask, contact…and you will know” would be his motto and an approach he would always promote.

After a few months of experience as a captain in a typical French restaurant in Versailles, he knew that he would be creating his own business in this industry. After considering both hospitality school of management and business school, he decided to approach the industry from a business point of view and successfully enrolled in EDHEC Business School, completing a double degree in finance and management. Today his wish is to keep sharing his deep passion with other professionals, restaurant owners, food lovers and talented chefs. His wildest dream is to expand his concept to cities he really loves like Shanghai, Hong Kong, Las Vegas, London and Barcelona.

I am currently working on how to expand the concept of Restolib’ abroad since restaurateurs who need to make money during days they are closed exist all around the world.

Where did the idea for Restolib’ come from?

The idea of Restolib’ came out of discussion with a chef. We were thinking about developing a training program for kitchen professionals and were looking for places to do the training. We could not afford to buy a kitchen in Paris so we had to find a kitchen to rent and organize sessions in restaurants without disturbing the daily operations. We decided that coming during off days was the answer. Then we realized that there was huge demand for cooking classes, but clients were starting to get bored with existing offers; going to an atelier designed without the special atmosphere that restaurants can have.

I usually wake up at 8 AM, check my emails, Facebook, newspaper, newsletters and bank accounts. Then I have a good breakfast and start my day by sending emails or making phone calls before going to appointments and planning future events with our chef, restaurant owners and suppliers. During events, I always greet the customers that I met via telephone or through email; this is the most important part of the day–meeting the people who trust you. The day often ends by watching a TV show or a good dinner with friends.

Usually when I have an idea, I make sure that it will be profitable for all the people involved. Most of the time, I share my idea with my associate and partners and together we determine who in our networks could be helpful. After identifying helpful people, we contact them, send emails, do research and make things happen.

What we call collaborative consumption, a way to consume goods we do not own. An example is Buzzcar, a service that allows you to rent your car during the time you do not use it.

I know it sounds cheesy, but I did not really have a worst job experience. Each of them was rich in learning. However, I had to go through rough time during some of them and I would say that I always took time to react wisely and take away what was positive for me. I remember an experience in which the mission given did not fit at all with what I was hired to do. I took the time to discuss this with my manager and to let him know my expectations, but day after day I kept doing the same boring tasks. I decided to leave after 3 months as I knew I was losing my time, but while I was there, I made efforts to discover other things I was allowed to see and learn.

I would be more confident in the potential of my concept and would renegotiate conditions of partnerships with suppliers.

I would recommend talking as often as possible with other entrepreneurs to share impressions, tips, fears and ideas. It has helped challenge my ideas, find solutions to my problems and move on. When I am in doubt, it is great to learn what others did to get beyond their issues.

Create an agency that advises young chefs coming from TV shows who are often left alone once the show is over.

Facebook, of course. It helps me create my brand image for free and to share everything we do in a second.

Google Analytics. I check it every day to analyze my website performance and to monitor websites referring to us.

Well sorry, it is in French but the name is Ces gestes qui nous trahissent and it analyzes all the facial micro expressions or habits that we have. It is a great read that will make you analyze each gesture of people in your surroundings and of course, your own.

If you weren’t working on Restolib, what would you be doing?

I would have loved to have gone on a world tour in which I discovered new restaurant or hotel concepts and then wrote a study about it.

I was seated in a Parisian restaurant and witnessed a scene in which a 16-year-old young man tried to convince the old lady running the place to give him a free glass of water. A clash of generation; it was very funny to see and my friends and I bet if she would be giving him the glass of water or not.

Steve Wynn, a casino entrepreneur in Las Vegas who has revolutionized the hospitality industry and made Las Vegas what it is today. He is really inspiring for me and I had the huge honor of meeting him in Macau.

What is the gift that would help you in your professional life?

Being able to read and analyze facial micro expressions in order to instantly know whether or not a person I am talking to is sincere.

What do you enjoy most about being an entrepreneur?

The freedom to do whatever I want, to test my ideas, to organize my schedule…