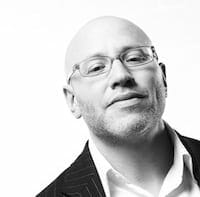 Before founding Gabardine, Peter served as global head of Creative Development at Reuters (later Thomson Reuters), the world’s leading provider of news and financial information. He was responsible for creating consistency, impact and inspiration across all of the company’s marketing communications materials. In addition to directing a major refresh of the corporate identity and establishing guidelines for its effective implementation, he ran a multi-national team of creatives and project managers in turning out world-class marcomms across every media channel.

Before joining Reuters, Peter served as vice-president, creative director with Modem Media, a pioneering agency in the world of interactive marketing communications. In just over six years with Modem, he led the creative strategy and implementation efforts on behalf of several world-class brands. Most notably, he oversaw the consolidation and alignment of IBM Global Services Web sites, led the interactive team that successfully launched Delta Air Lines’ low-fare subsidiary, Song, and helped win more than $4MM of new business.

Prior to his work in the online space, Peter held creative management positions in traditional agencies, including divisions of the InterPublic Group, Grey Advertising and Bates Worldwide. He developed advertising, direct response and promotional marketing pieces for both business and consumer audiences.

Peter has a deep understanding of the role that marketing communications play in solving business problems and building brand equity. To those ends, he builds teams that approach work strategically, think conceptually and execute brilliantly.

Peter holds a Bachelor of Arts from the University of Chicago, lives in Stamford, Conn., with his wife and three children, and tries daily to keep his penchant for mid-century modern furnishings at bay.

Business ethics, or the lack thereof. Lately it seems like every Tom, Dick and Jane is looking to get a leg up on being underhanded.

For this new breed of striver, I’ve compiled a list of seven superlative ways to become (or improve as) a professional douchebag:

1. Don’t return phone calls, e-mails or other entreaties for your attention, no matter how innocuous or, indeed, potentially beneficial. You’re just too damn important, and you know it. It’s time others got the hint. Let them know by saying nothing.

3. Lead people on. It’s a great way to keep up the illusion that you care, while at the same time ensuring that they don’t go looking elsewhere for opportunities to … oh, I don’t know … improve their business.

4. You know that old axiom, All you’ve got in business is your word? Forget it. There’s blogs and Twitter and Facebook and countless other social media you can use to deflect attention from the fact that your word’s worth nothing and your reputation is crap. Work it girl!

5. Don’t pay your bills (they’re for suckers). Sure there’s basic stuff you can’t blow off, like utilities and that half-double-decaf-half-caf-skim-latte you’re always carrying around. But invoices for services that have been faithfully and expertly rendered on time/budget? Puleeze. Those things’ll keep until; well, let’s face it, until you need more services.

6. Expect something for nothing. You know you’re worth it. And really, why should you be lumped in with those same poor slobs who actually pay for the things they enjoy?

7. Talk down to folks. You know more than everyone … about everything. And besides, you’re in charge. What more reason do you need to act like the schoolyard bully? Go ahead and re-live the halcyon days of your youth. What’s that, you say? You’d rather not be an industry pariah? The prospect of damaging your reputation and long-term business prospects for short-term gain doesn’t excite you? You actually have a moral compass and would feel genuinely bad if you committed any combination of the aforementioned trespasses?

Well, good for you. You’re not alone.

In fact, most people I come across — partners, clients, vendors; hell, even our landlords are similarly scrupled. Crazy as it seems, they actually believe in doing business honestly, with more than a modicum of professional integrity and a sense of common courtesy that comes from being raised by something other than a pack of wolves.

Clearly these people aren’t in the vanguard. And, by extension, neither are you and I. But we’re all still in the majority. And that counts for something. It means that even though a few reprobates wantonly ignore their super-ego (and/or the law), the rest of us can and will rise above.

That even though it’s a jungle out there and competition is fierce, we’ll continue to conduct ourselves in ways that would make our moms proud. So, here’s to us; the people working for profit and, at the same time, to return business ethix to ethics, both in spelling and in practice.

Marketing of iPad apps. Many apps themselves are great, but to the extent that a tree falling in the woods doesn’t make much sound if no one’s there to hear it, the developers need to account for marketing in their plans.

The increasingly blurry line between Flash, H.264, Java, HTML5 and other video formats for the Web and mobile devices. I’ve got my own thoughts about how this will all shake out, but hearing the pontifications of other folks is endless fun.

Small agency growth. As in, the trend away from big do-it-all behemoths to more focused, more nimble, more engaged shops that actually get stuff done. But don’t take my word for it. The legendary Bruce Silverman says as much right here on IdeaMensch.

With pretty pictures. No, really. Even though I come from the copy side, I’ve found over the years that there’s enormous value in putting together a few simple sketches of what the hell I’m talking about.

It gets heads nodding, and better yet, brains understanding, so you can have more meaningful discussions. (I know, what a concept!) Read more about it here: http://www.thebackofthenapkin.com/

Not tempering my passion with patience. I could have strengthened relationships, achieved better outcomes and been far, far less stressed if I’d just taken a breath or break before reacting to something about which I felt at the time was critically important.

I’m still working on it …

Book: “The Art Of Looking Sideways,” by Alan Fletcher. It’s an impossibly long and convoluted collection of endless ideas that never ceases to inspire. (Thanks Timba!)

Tool: Basecamp. I’m not a shill for the folks at 37Signals, but BC is really quite good at helping us manage projects and stay on task. Of course, that’s not to say there isn’t room for improvement …

It’s not process, it’s people. Meaning that no matter how locked down the methodology may be, what really makes things happen are individuals with ideas and initiative and passion. So put in place the best mechanisms you can find/create to get things done, but don’t skimp on the brain power you’ll need to actually do them.

What are you doing to create a better agency?

A lot. Like simplifying our statements of work so they’re easy (some have even said entertaining) to read and easy to understand; giving employees big chunks of personal time off to use however they see fit, be it volunteer work or vacation or anything else; delivering on the promises of “nimble” and “integrated” by carefully managing growth and resources; and much more …

Why don’t you lighten up?

Mostly because lots of people around me are pretty easygoing. It’s awesome and helps balance out my life. But there are times when *somebody’s* got to keep things real/serious/focused, and I see that as something of my responsibility.