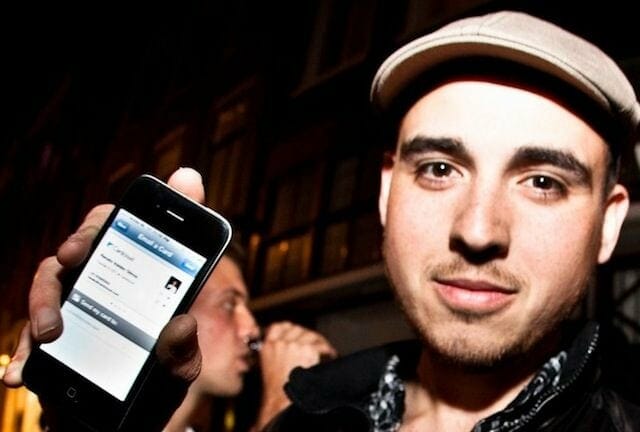 [quote style=”boxed”]Minimize everything that doesn’t have a direct effect on your product. Make beautiful things. Pitch less, build more.[/quote]

Renato started out as a graphic designer before graduating with an MA in Interaction Design. From that moment on, he founded several companies: Postmachina – a profitable design agency. My Name is E – a social networking hardware company that eventually failed. And his current company, Cardcloud – a service and mobile applications that allow you to exchange digital business cards.

He spends most of his time performing his duties as CEO of Cardcloud: communicating long-term vision of the company and hiring new talent. Apart from Cardcloud, Renato is an active advisor to early stage startup companies in the mobile app space. As founding member of STIKK, a Dutch entrepreneurial collective, he spends his time passing down knowledge from founder to founder.

Several updates to our mobile applications: better features and usability for existing and new Cardcloud users. Apart from this, I spend a lot of time doing business development in Silicon Valley. That’s mostly conversations with partners and events to integrate with our system.

Where did the idea for Cardcloud come from?

Me and my co-founder graduated with a project called ‘My Name is E’ – which was a digital object that allowed you to connect physical objects to the virtual world. We turned this into a company (which eventually failed, due to many reasons) – but part of the ideas conceptualized in My Name is E were transferred to Cardcloud. However, with Cardcloud we have a laser-sharp focus on taking business cards to the next level.

Really depends on my location. I spend most my time between Amsterdam, San Francisco and New York. But I guess there are some patterns I bring to every city. I like to get up early and go for a run. I feel I need heavy physical exercise to stay healthy and focus. It allows me to clear my mind before I dive into emails. So I do my run early. Quick shower, breakfast, and emails. Lots of emails. After that – I get to the office and catch up with the team. What they’re working on individually, what they’re struggling with. How I can can help in streamlining whatever they’re working on. After lunch, I spend my time on meetings, calls and more email. During the evening I tend to work on new concepts, designs. This work often takes me late into the night.

I’m fascinated by bringing real-world metaphors to the digital realm. How can we amplify the benefits of a digital solution as much as possible without losing the elegance and simplicity of real-world interactions? This is what drives my work. So I analyze real world objects, gestures, interactions thoroughly. Based on that – I shape digital counterparts.

Probably nothing. Becoming good at something is a sum of talent and failure. You need to make mistakes to improve yourself. No success happens overnight.

Minimize everything that doesn’t have a direct effect on your product. Make beautiful things. Pitch less, build more.

I used to be incredibly obese.

The Dreaming Void, by Richard F. Hamilton. It’s a far-fetched, over the top sci-fi opera. It inspires you to look beyond what’s now.

If you weren’t working on Cardcloud, what would you be doing?

@Werner: my mentor, inspiration and all-round fantastically smart individual.
@Jack: one of the world’s finest and most focused entrepreneurs.
@olafurarnalds: an incredibly talented musician/composer.

The company of a friend of mine got acquired, and he moved from Amsterdam to San Francisco. His goal was not to start spending money wildly. He ordered the top rated, but cheapest items on Amazon.com for his new house. Of of these items was a broom. We found out it was so cheap because it was an undersized toy broom for kids.

What do you think is the most important skill in building a company?

Since taking lead as the CEO of our company, the most valuable skill I’ve learned is to find new talent and unleash their potential. With my background in design comes a quirky little character ‘flaw’ – wanting to control every minimal design detail, every pixel, makes it hard to let anyone do any work because you’ll always feel you can do better. I took me a while to realize that the only way to growth and success is by finding people who are better than you at something. Whether that’s being better at skills you deem you’re an expert at, or being better at something that you just can’t do yourself. The moment your idea and vision brushes off on your team in such a way that they feel they’re part of the story and vision, rather than just executing, is pure magic.

What would you have done if it wasn’t for technology?

I love buildings things for others. Doing things with/for large groups of people intrigue me. Whether it’s helping on a small-scale, or diving into patterns and statistics on a large-scale. What exactly that could have been is vague, and I’m not sure if I’ll ever find out about that.

They can go to cardcloud.com/renn and get access to all my personals.