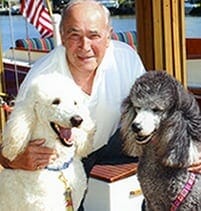 Richard O’Leary was born the only son of an Irish immigrant, raised in Auburn, Maine and attended Maine Maritime Academy. He served as an officer in the U.S. Navy, the Merchant Marine and as Commandant of Midshipmen at the U.S. Merchant Marine Academy at Kings Point. He later moved to Norfolk, Virginia and became the Deputy Director of the Norfolk Port Authority. In 1972, O’Leary founded Cruise Ventures Inc. and served as Chairman for 34 years. The company grew from 1 person to 2,500 people, with 55 offices in 12 states and owned thirteen 600-passenger harbor cruise vessels. He also spent 28 years in the Naval Reserve and was Commanding Officer of the largest Naval Reserve Unit in the country.

I just wrote a memoir called One with the Sea: An Inspiring Rags-to-Riches Saga of the Son of an Irish Immigrant (Jetty House, an imprint of Peter E.Randall Publisher, September 2011) and I’m currently on tour promoting it.

How did you decide to take the leap, go into the business world, and start your own company?

I had studied the Alexander Hamilton course in business and earned a Master’s degree in business at Adelphi University in New York. Because of my seagoing experience, especially the 5 years on the SS United States, the world’s greatest passenger liner, I fell in love with ships that carried people. This, combined with the fact that I was well known in Norfolk  for my work promoting cruise activity with the Port Authority, made it a natural step for me to start a cruise marketing company.

I live in Maine in the summer and Naples, Florida in the winter. I am an early riser and usually devour a couple of newspapers, work out a little and sometimes play golf. Writing and marketing my new book has kept me very busy for the last couple of years.

3 trends that excite you.

1) I’m really just learning about the Internet and find it fascinating.
2) The increasing availability of information about personal investing.
3) Because I am a bit of a political news junkie, I like the development of 24-hour cable news. The flip side is that it seems to threaten the existence of newspapers.

I generally follow a process that involves testing a new idea–particularly in business. I try to follow a philosophy of hoping for the best but planning for the worst. If it is an important idea, I believe in creating a written plan.

Words, beautiful words. Both written and spoken – and, of course, the sea.

What is one mistake you’ve made?

The first ship I owned was an old 1941 ex-Naval vessel. I led my company in developing an excellent concept for harbor cruise marketing but unfortunately we had invested in the wrong vessel. There were engine problems and unreliable reversible-pitch propellers made it difficult to stop the ship. We soon learned that expenses in repairing the vessel were rising faster than the passenger count. However, we survived and went on to build a fleet of thirteen 600-passenger harbor cruise vessels.

When I was in junior high school in Maine, I attended an assembly in which a man from Alaska spoke. He spoke eloquently of Alaska but in the middle he said something I adopted as my personal and business motto, “to succeed all you have to do is a little more than people expect you to, because most people are trying to do a little less.”

Confessions of an Advertising Man is a classic written by one of the legends of advertising, David Ogilvy. It was written in the sixties, yet Ogilvy’s insights on advertising, business and human behavior are timeless. If you want to know how to conduct yourself in business, how to write and how to communicate with people, I recommend that you read this book.

Who would you like to see interviewed on Idea Mensch?

Jim Denton who served as an officer in the U.S. Navy. He later worked in my company for 7 years. He has advanced to become the publisher and editor of the bimonthly print journal, World Affairs, and its online daily edition at WorldAffairsJournal.org. He is the son of Jeremiah Denton, the Vietnam prisoner of war who became a U.S. Navy Admiral and a U.S. Senator.

Yesterday, the owner of Tourist News, a fine regional paper on the Maine Coast, visited our home with a photographer to work on an article. Right after she arrived one of our two standard poodles went upstairs, came back and presented her with the ugliest and most beat-up toy dog imaginable. This dog never does anything like this. Our important guest accepted it and held on to it for a while. I did indeed laugh out loud.

What are the most important things to keep in mind as an entrepreneur?

When you become an entrepreneur, as I did, you must remember to care deeply for the people who believed and invested in you and for your employees. I believe strongly in these principles and in fact turned my company over to the employees through an Employee Stock Ownership Plan.

What do you attribute your successful life to?

God and the fact that I was born in America. I also attribute success in my life to the support of my wife, family and to the wonderful people I met at important junctures in my life.

I welcome folks to check out my website for my new book, One with the Sea, at . I can be reached by email at [email protected]