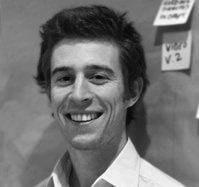 Rob Symington is one half of the team behind a new website called www.escapethecity.org.They are on a mission to liberate talented professionals from unfulfilling corporate jobs.

He is interested in innovative business ideas, stories that spread, and the power of the internet to make things happen. He believes that ‘just because’ things are done in a certain way it doesn’t mean that that is the best way to do them.

In 2006 he drove a 35 year old Land Rover through Africa from Cape Town to Cairo. He likes road trips in old impractical vehicles that break down a lot. He owns a motorbike that doesn’t work called Josephine. He recently bought an orange double-decker bus called Esmerelda with 5 friends. He loves Manchester United.

Rob followed a very traditional path from school through university and into his first corporate job. Never really questioning the trajectory that he was on (working hard to get the grades, going for lots of interviews on graduate training schemes because it seemed like the right thing to do, etc, etc). Having ticked all the right boxes along the way he found himself working as a management consultant for a big corporate firm in ‘the city’ in London.

He and his business partner Dom (who was doing the same job) were soon struck by the realization that there is more to life than doing work that doesn’t matter to you. When they began to reflect on where they wanted to be in five, ten, and fifteen years time, they both realized that they didn’t want to pursue careers in the corporate mainstream. They both wanted to do something a bit different, something that they genuinely cared about.

Escape the City was born the day that they were sitting in neighbouring cubicles at work and admitted to each other that they thought there was more to life than what they were doing. They then realized that they were far from being alone in feeling frustrated and unfulfilled in ‘The City’ and that thousands of their fellow corporate professionals felt the same way. So they decided that they would build something to help all these people and, through doing so, to engineer their own escapes as well!

www.escapethecity.org has been online for 8 months and already has more than 19,000 members. The platform has already helped dozens of people to quit boring corporate jobs in favour of something more exciting. Harry (ex-hedge funder in London) is now managing a beach lodge in northern Mozambique. Amelia left property law to work at Coral Cay Conservation. Tom found a job clearing land-mines in Cambodia with the Halo Trust, the list is long and growing.

It is designed as a community first and a business second. The objective? To liberate talented corporate professionals from unfulfilling jobs. Their call to action? Do Something Different!

Right now we are working on our plan for the next incarnation of our website. We have learnt so much from having a v.1 online but our thinking is evolving far faster than the platform has. We’re about to hire a full-time programmer to be our third team member and help take us to the next level. It’s incredibly exciting.

1. The fact that more and more people are realising that you don’t have to experience life the way other people expect you to.
2. The fact that internet has demolished the barriers to entry for so many businesses. Young people today can start things with no money and that’s hugely exciting.
3. The fact that I can run my business from anywhere in the world.

Although our ideas technically come to life in front of a computer screen they are NEVER born there. All my good (or is that hubris?) – all my better-than-average ideas, come when I’m in the shower, on a run, on the London underground. In fact I often think I should just get on the Circle line with a pen and paper and start scribbling. There’s something very fertile and creative about the tube for some reason! When we’re developing our ideas we use post-it notes, big sheets of paper, and lots of tea.

Brave people. Not only in the traditional sense of adventurers, explorers (although they inspire me too). I’m really inspired by people who have the guts make a stand and say: “Hang on, why do we do things this way? I’m going to try to change them”. Anyone who is on a mission to change things for the better (not necessarily change / save the world – just make small, positive changes whatever they’re working on).

Hmm… if you’re going to start something that is web-based and more than just information on the page (i.e. interactive / dynamic) you really should have the technical skills on your team so that you can evolve, iterate, and test quickly. We haven’t up till now and it has held us back.

I reckon there’s a huge market for providing ‘Hangover Recovery Kits’ to hungover Londoners on Friday, Saturday and Sunday mornings. We would cater everything from the ingredients for the perfect Bloody Mary through to everything you need for a fry-up, painkillers, fresh juices, tea, ice-packs for your face. So often people wake up after a big night and the last thing they want to do is go to the shops. How much fun would it be zooming around town on a scooter delivering salvation to people and saving their weekends?!

Book: You can’t beat Tribes by Seth Godin. Gets me every time. Helps me be braver than I would be otherwise.
Tool: Email. Old school I know. Dom and I email each other incessantly. It’s probably very inefficient but we spark off each other’s ideas and the thread that we build up often delivers some of our most exciting ides.

Interview Hermione Taylor who has founded The DoNation…
Charitable giving site but instead of donating money you donate actions. Great idea – passionate lady.

Where do you think Escape the City could be in 3 years?

If we do the right things in the right order, within three years Esc could be a global community of corporate professionals who want to do something different. It could be THE platform for people to find exciting things to do with their lives. The platform helps people find exciting jobs, start cool businesses, and go on epic adventures. If we can be doing this for more people and more effectively then we’ll be happy men!

Why do you like road trips so much? Why in such impractical vehicles?

I love moving through places. I love the freedom that comes with being under your own steam and being able to go wherever you want. I’m usually in an impractical vehicle because I can’t afford the more practical ones. But it’s also much more fun to travel on or in a machine with character!