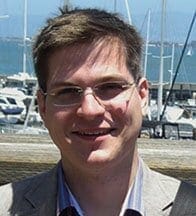 [quote style=”boxed”]
A new idea starts out as one small note taking during whatever occasion and is refined constantly over time.
[/quote]

Robert Boehme the CEO Part Time Scientists, a German based team of over 100 scientists, engineers and researcher that are working in cooperation with over 50 industrial partners towards sending a rover to the moon. He is a system engineer who took the shortcut directly from high school to work and started working his first job at the age of 18 as a consultant for the German government. He graduated as one of the youngest Red Hat Certified Engineers ever with a test score of 110%. He is one of the founding figures of the in Germany well known, “Linuxeinsteiger” community. His track record of writing about himself in third person is quite good too.

I am the team leader and CEO of a German based team of over 100 scientists, engineers and researcher that are working in cooperation with over 50 industrial partners towards sending a rover to the moon. Our team is also working in close cooperation with multiple national and international universities and institutes like the TU- Wien or the German Aerospace Agency (DLR).

Typically it starts with getting up, checking my mail, without extra gating I receive about 100 messages per day that need attention. After the first sorting through depending on my schedule I am either following my daytime job in consulting the government or are doing things like, visiting the DLR institutes, consulting with NASA (NASA Ames, NASA/JPL), Google, our Partners, Manufacturers, our team, also meeting potential sponsors, investors and interesting people like Bill Gates for example and of course giving Interviews. But when working on a lunar mission there is no such thing as a “typical” day, right now for example I am sitting in a Hotel room in San Francisco California and spent the entire day debating with NASA Ames on how NASA could help kickstart the “new space” economy.

The #1 trend I like and can’t live without any longer is mobile working, may it be the 3 hours waiting on the runway or the time before the coffee machine is ready, with tools like iPhones and Microsoft Exchange you can use this more efficient than ever before. I often found that I am even more productive when working on the go, then I am in my office. Regulary I spent the day walking around with 2 phones and 2 laptops.

Trend #2 is international collaboration across borders, timezones and cultural differences. Nowadays you can create highly efficient teams across the globe. This is thanks to many of the so called Web 2.0 gadgets like, VoIP(Mumble, Skype), Dropbox, MindMeister, Sharepoint (a big one!) and of course E- Mail.

Trend #3 and last, I found the private space sector most exciting as it isn’t a replacement for the current aerospace industry but rather a supplement for all the currently unfulfilled needs in the market. Over 40 years after Apollo it’s time to go back!

Originally I tend to use a pen and a sheet of paper, starting out with a new idea was simply a new blank page in my notebook. I prefer quick diagrams, battling pro’s and con’s and asking third parties on their opinion. Nowadays I am pretty much dependent on cloud based services especially like Evernote. A new idea starts out as one small note taking during whatever occasion and is refined constantly over time. What matters most for me is gathering as much as opinions as possible on new ideas and concepts. I am always following a straight line when it comes to technical development but are very open to suggestions and new solutions. After all – nothing is impossible.

Great books and good music; In general any kind of Science Fiction that realistically deals with “what could be”.

The biggest mistakes are always the ones you do multiple times until you finally and hopefully still in time understand what’s wrong. In my case it is simply “communication”. Keeping people informed, always following up on request, making sure everyone is one the same page is extremely important. What I learned is that a good information management is really everything, it may not be the single key to success but it sure is the potential nail in the coffin.

Normally I don’t have the time to read much unrelated to either my work as a team leader or my consultant activity. However I love to read Blogs about social and IT topics like fefe’s Blog from time to time just because of his commentary on current events.

I really love books and selecting a single one nearly kills me! However one of the most valuable books I’ve ever got my Hands on was “slide:ology: The Art and Science of Creating Great Presentations” from Nancy Duarte published by O’Reilly. It’s a must read for everyone who’s project depends upon successful delivery of your message to a broader audience. The book itself serves as a perfect library, need to display 3 complex information on one powerpoint slide? Just open up the right chapter and you get 20 different solutions with explanations and tips how to do it right. The basic thing it gets right is to teach the reader how to approach the creation process of a great presentation. Most scientists could use help like that for their own projects.

Favorite gadgets change like the seasons, however my current favorite App is definitely Evernote on my mobile and notebook.

Most definitely two really great people. First Tiffany Montague from Google due to her work as the “CEO” of the Google space program. Second Michael Doornbos as being one of the most influential people in the “new space” sector. But he’s way to modest to admit it.

Actually I laugh quite often, the last time I caught myself was laughing about “Stan” the T-Rex at the Google HQ with his army of pink flamingos!

Please share the story about the naming of Asimov Jr

The name Asimov Junior is based on the fact that we wanted to honor Isaac Asimov the Inventor of the “laws of robotics”. First we started out using very generic names like, Rover-01, they we’re useful but very limited. As soon as we started working on different generation we’re facing a problem. Besides talking about our team and saying we just Build Rover-XY isn’t very intuitive, so we agreed that rover needs a name! It didn’t take long till we all agreed and Asimov for the final rover name. All rovers that are going to be built until Asimov makes its way to the moon are simply called “Asimov Junior”. It’s actually a theme that makes its way though all major components we are creating. Every craft we assemble will wear the name of a Science-Fiction author who inspired us and raised our interest in science.

What is the most unexpected thing that has happened since you became a team?

A lot of great and unexpected things have happened; it’s hard to pick one out of so many. For instance I would have never believed to find such a strong support across the board on all sides, from our partners, institutions, the media and most important from the team and of course my family. A lot of things are unexpected until they actually happen, so for example if I am writing artists like Brad Sucks or Skatebaard or people like Bill Gates a letter and then got a positive reply in our Inbox a day later, than this is unexpected and most awesome! To give you an example, we’ve got an mail from a member of ESA saying: “Hey Part-Time Scientists, I just got to work and everyone is walking around in your shirts over here, can I get one too?” This is unexpected and most awesome.

What’s most important in your private life?

Being a Part-Time-Scientist and having the urge to achieve something great does affect your private life as much as does your daily life. Besides that my cat Mickey, good books and being with the team matters a lot to me.

I always try to keep my personal and business life separate such I will only reference our public channels which are also monitored and sometimes even commented on by myself.