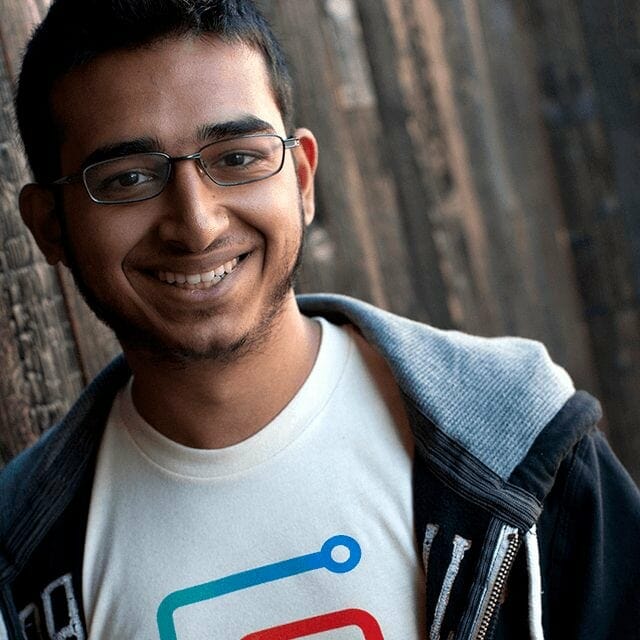 Sahil Lavingia is an 18-year-old USC student soon to be living in San Francisco. He enjoys making useful stuff for fun and profit, but mostly for fun. He’s behind Dayta and Color Stream for iPhone, and his latest project is Let’s Crate. He also built Rmmbr to learn Python.

I’m working on this neat little thing called Gumroad, trying to make selling something as easy as sharing.

Where did the idea for Gumroad come from?

I designed an icon in Photoshop and quickly came to realize that the gap between selling it and sharing it was way too big to make sense.

I get up and answer emails. On some lucky days I get the inbox down to zero (from around 30). I shower, get on my computer, hit inbox zero again,  work on urgent tasks, have a meeting at Sight Glass, work some more, design and code, eat lunch out with the team, work some more, and maybe have another meeting at Sight Glass. Then I have dinner out with the team, work work, work, and maybe have time for some book reading on my Kindle. Then I sleep!

By starting. I don’t really think about ideas too much in my head. Ninety percent of the ideas I have flutter around for a while and disappear. They’re probably not worth working on anyways. But a few of them stick around after weeks or months, and then I know they may have some value. Then I just start working on whatever is most productive toward reaching the goal of launching that idea. That could involve jumping straight into code and developing a proof-of-concept, designing it out in Photoshop so it makes better sense than it did in my head, or pitching the idea and trying to raise capital right away.

Soon we’ll have access to everything that others know, from everywhere. I’ll be able to be on the top of a mountain in Nepal and have access to the most obscure fact that was once hidden away in some crumpled newspaper somewhere in Germany. That will spur innovation like nothing else. I am excited!

I’ve been fortunate to have only been employed full-time once before I started Gumroad.

Nothing–so far, so good. I am having lots of fun and would be afraid any differences would change this.

Enjoy the breaths and remember you are breathing. Take a break from running.

It is easy for me to think of everything in terms of code and design, but most people typically do not. Understanding this is easy, but remembering it on a daily basis is very difficult.

I would make the weather a bit more consistent year-round. But overall, I am happy with it. I would live here again.

I hate tomatos in sandwiches and salads, but love them otherwise.

Believe it or not, I just learned the value of Terminal less than a month ago. And damn, it’s useful. Git is pretty fly, too.

A minute ago. Someone made a joke that was politically incorrect.

The people I dont know about because they’re so busy fixing the problems they think matter.

Shitty stuff. There is so much crap in the world, even today with all our awesome innovations. It’s weird, you can look at many of the things you do every day and still find a ton of things that need improving. This is awesome for people like me. It’s easy to capitalize on making the world better.

I thought ideas were meaningful and tried to sell ideas rather than building them into businesses. Instead of making something valuable, I would whip up a design or a script and sell that (for very little). I’ve learned that businesses are much more valuable, and I’m much more about long-term value than I once was.

I have this idea floating around in my head. I think I may do it, but it’s pretty intensive, and I just don’t have the time. The idea is to build a utility-based marketplace. Nothing would have a price tag on it; the utility would bring items to you. You then could tag items you see on the marketplace. Then you could sell/buy/trade items based on that. I think it could be pretty cool.

I’m not a book person; I prefer essays. However, I really liked Predictably Irrational. It helps me a lot with how I choose to lay out pages to increase conversion. The paradox of choice, for example, is a pretty big thing mentioned in there.

Barack Obama. We “entrepreneurs” are all about creating change, but he’s had a much larger impact on change than any of us. Maybe after his term is over?

What’s a professional goal you want to meet in 2011?

I really want to help out companies other than the one’s I’ve built or been employed by. I would love to angel invest and/or advise a few companies. I would be honored if that happens, but I’m not incredibly hopeful.
If you had to tell a younger version of you (five years ago) a piece of advice, what would you say?
Do what you love. Everything else ends up working out great after that’s done. As long as you’re doing the bare-minimum in everything else, go all-out in whatever you’re obsessed with.

What do you wish you spent more time doing during the work day?

Puking ideas all over a whiteboard wall. I’ll have more time for this soon, I hope (at my new office!).

What are you missing in life?

Someone to whom I can confess everything.