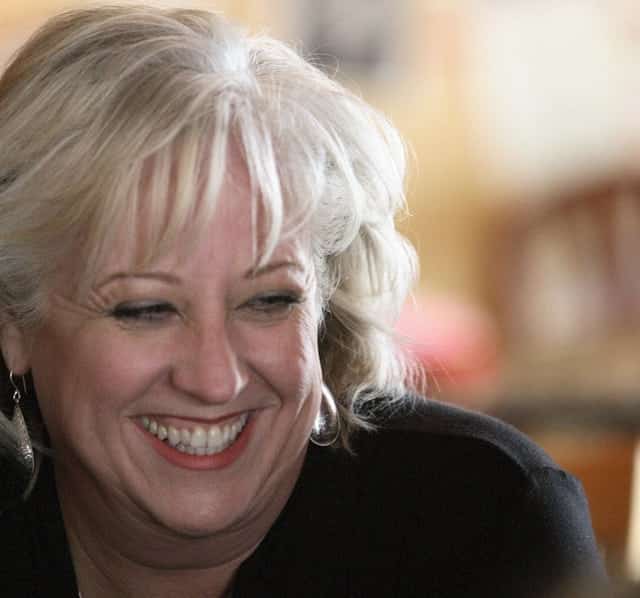 [quote style=”boxed”]I would have believed in the girl in the mirror more, and had more faith in her. [/quote]

Wrinkled Records originated in a conversation between award-winning Nashville artist/songwriter Sandy Knox and her dad. No stranger to chart-topping songs, Knox co-wrote three consecutive hits for Reba McEntire, including the Grammy-winning “Does He Love You?,” “Why Haven’t I Heard from You?” and the critically acclaimed song about a woman dying of AIDS, “She Thinks His Name was John.” She was a well-known and highly-respected presence on Music Row—serving on industry boards, mentoring young writers and captivating audiences with her live performances backed by a 10-piece band.

After recording her favorite songs her way and looking for an outlet to release the record, Knox then went to her father for his help in setting up the business model for a small record company. He asked her what she was going to call it, and she did what she had done her entire life: thumbed her nose at convention, and thus the idea for Wrinkled Records was born.

In the ensuing decade, Knox moved to Austin, her father passed away, she moved back to Nashville, had a heart attack and was diagnosed with colon cancer. While recuperating and recovering, she found herself wondering, “What next?” About that time, she began running into Katie Gillon, a longtime friend and 25-year veteran of the music business. Over many conversations, they mulled the possibilities. Finally, one night at the bar of their favorite neighborhood restaurant, they decided it was now or never—and over another martini, they toasted the rebirth of Wrinkled Records.

Wrinkled Records is an innovative indie record label that strives to create and distribute great music with a heartbeat, providing a creative outlet for a diverse group of independent singers and songwriters. Just as the name suggests, it represents the latest “wrinkle” in an ever-evolving music business paradigm. Unlike other record labels, it champions the song before the single, art before commerce and unabashed artistic idealism in all its magnificent glory. Wrinkled’s goals are not bound by shareholder interests, music genre or age restrictions. It is committed to artistic development, professional excellence, customer satisfaction, playing fair, community service and enriching lives by creating the best music.

Both Wrinkled Record’s staff and its roster of artists aspire to a working environment that encourages creativity and professional excellence. They share the commonly held belief that through the gift of music, dreams can be realized, hope can be restored and lives can be transformed in a positive way. Wrinkled is a small record company dedicated less to hierarchy of command and more to upholding standards of behavior that strengthen both the team and the artists it represents. (And they like having fun, too.) At Wrinkled Records, where the work environment is relaxed and comfortable, they have taken a firm stance against ironing!

Where did the idea for Wrinkled Records come from?

I had released a CD in the 1997 called “Pushin’ 40, Never Married, No Kids,” and my attorney at the time made the comment that I should not mention my age in the title (I was 38 at the time). I politely disagreed, and when it came time to name the label, I once again thumbed my nose at convention and called the label Wrinkled Records. After my CD was released, the label lay dormant for a couple of years, and in 2010 I decided to resurrect it and focus on the Baby Boomers’ musical tastes.

I always get up early and let my dogs out, have coffee and breakfast, and try to get the treadmill. (Does not always happen!) I start checking email and deal with anything that needs immediate attention. We have staff meetings twice a week, so I always have things to get done in order to be prepared for them. Sometimes I have a breakfast or lunch meeting. I try to wrap up my work day by 3:00 or 4:00, but that does not always happen.

I think about them a lot and then discuss them with the Wrinkled crew. We bat things around, and I really encourage everyone to share their ideas and thoughts on things. No idea is frivolous because it can plant the seed for the next great idea.

I am not a trendy person, so this does not apply to me.

Once I had a job at a job placement office that was terrible. There were so many qualified people looking for jobs and I could not help them. It broke my heart. I quit after one week because I was so depressed. I learned that I would never do a job like that again.

I would have believed in the girl in the mirror more, and had more faith in her.

Treat the people that you work with as you want to be treated. I learned this from my father—he was a great boss and was respected by everyone who he worked with.

Once I was in a bad contract with a truly despicable person. I learned to not fear the bully.

Have fun at what you are doing. Even though my job is hard work, I love the core of what we are doing, so that makes it easier to get through the rough spots.

This question is just too vast to undertake at this time.

I think that cilantro should be banned from all kitchens. I just hate it.

I hate to tell you that I have yet to tweet.

Everyone who knows me knows that I laugh out loud all the time, hourly. I am a funny person and I surround myself with people who have quick wits. Laughter is very important.

My parents, hands down.

What is one way an owner or boss can run a company into the ground?

Only show up at the office a few times a week and expect everyone else to do your work.

Is there a “one that got away”?

Yes, his name was….Oh wait; I already told you a secret.