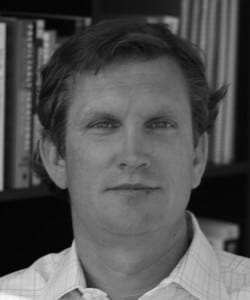 Scott Crawford is the founder and CEO of DebtGoal. A self-described econ geek and spreadsheet junkie, Scott has worked in the Congressional budget office and for HSBC – where he ran product R&D, product management and consumer insights in HSBC’s credit card group.

While at HSBC, Scott developed an appreciation for the burdens caused by excessive consumer debt and the customer demand for a simple debt-reduction service. Prior to HSBC, Crawford worked at Dell, Inc, Bain & Co., and for the Congressional Budget Office. Scott has an MBA from Stanford’s Graduate School of Business and a BA in economics from UCLA.

Scott Crawford has seen first-hand how credit card companies use their own powerful algorithms to stack the cards against borrowers. He founded DebtGoal with the intention of putting the power back in the hands of consumers with a proprietary debt pay-down algorithm that automatically calculates the smartest and fastest way to pay off multiple loans.

DebtGoal, which is an online, DIY tool with a sophisticated debt pay-down algorithm at its core. The algorithm instantly calculates the fastest and smartest way to pay down debt and then creates a customized plan for users to follow based on what they are comfortable paying. Being an innovator brings a distinct set of challenges: defining the customer problem and solution, creating the right go-to-market strategy, staying ahead of fast followers. Right now we’re very focused on maintaining our product lead in the new category of Debt Acceleration and leveraging this into new distribution opportunities.

3 Trends that excite you:

One incredibly positive thing to emerge from the credit crisis has been an increased focus on people’s real-world financial goals. Going back 2-3 years, banks just pushed products. Now they¹ve shifted their marketing message to a focus on customer goals. Over time, I think the basis of competition will shift to offering “solutions” instead of products. How great would it be if banks measured themselves and competed with each other based on how many people successfully saved for a goal instead of whether they offer a .45% or .55% yield on a savings account?

People online are increasingly willing to talk about tough problems. I think this is incredibly positive, as sharing goals with others is highly correlated with success. Simply put, the support and peer pressure from others makes you more likely to succeed. That’s very powerful. The next stage is moving beyond random sharing to systematically involving others in a way that’s meaningful for both parties. Stickk.com has started doing this, but I think there are opportunities to take this further.

The book Nudge recently outlined how the manner in which choices are framed can influence behavior. Whether something is positioned as a positive or a negative, and which choices are presented as defaults can dramatically shape the choices we make. That’s a bit creepy; companies (and marketers in particular) influence our behavior by tapping into hard-wired heuristics that operate below our level of consciousness. There’s a new movement of socially-minded companies like DebtGoal to start to use some of these behavioral biases to empower and benefit our customers rather than to their detriment.

Just listen and keep your eyes open. Focus on the things you see, experience, and are passionate about. One of my favorite examples lately is the TSA security checks. They’re so bad it makes me crazy. I went through an airport where one guy’s job was literally to stand at an awkward corner and move trays around the corner. A full time job! Every time I walk through a TSA check, I see several things that could be improved:

The process is so bad I have to believe there’s a good business in there  somewhere.

Not having the right team. When we started the business, we should have been more thoughtful about how the team would work together, whether our visions matched, whether we had similar work styles, and if we complimented or duplicated in functional expertise. Building the right team and the right culture is very important and definitely cost us out of the gate.

Don’t invent. Transfer innovation. The printing press is my favorite example. The Gutenberg press was mostly an assembly of existing technologies to create an innovative solution. He focused on some key needs that fell out of that existing concept like better production of moveable type, but he primarily took existing technologies and applied it in innovative ways to a new problem. Most big breakthroughs come in similar fashion. Gutenberg was well positioned, with family in the wine business (the press) and in printing and some other areas. The more diverse you are, the better positioned you are to spot opportunities to transfer technology.

How to Thrive in the New Normal Economy?

The “New Normal” is a great concept. We’ve moved from an era of fake prosperity to something else and we’re still not sure what that is. But with American consumers rebuilding their balance sheets and a general concern for sustainability I think the time is right for transformative business models.

In general, ours is an advertising-based, volume driven economy. We make more by selling more and to do so, we relentlessly message consumers to buy more and more. But this clearly isn’t sustainable from global or micro points of view.

So I think here’s one big paradox of the New Normal Economy: How to profit by selling less? Many local power companies actually give credits and refunds for investments that reduce power consumption. We recently installed insulation in my mother-in-law’s house and the power company paid for most of it. They’re able to do this because the local utility commissions let them raise prices to compensate for the reduction. Overall, society spends less on power because their drop in power units compensates for the higher prices. And the utility increases profits because they don’t pay production costs for the units that are no longer consumed. In this case there’s a government body to align incentives efficiently. But what other mechanisms are there? I once tested a credit card concept that was only good for essentials like groceries and gas and found that people were actually willing to pay more for a card that really had reduced functionality. But to them it offered forced self-control and they viewed that as enhanced functionality that they were willing to pay for.

How to relax with the pressures of a startup?

I don’t do this well at all, so asking others has become a side hobby. Here’ s what I’ve learned. I find that work tends to creep into the corners of your mind unless you’re very actively engaged in other things, so I make an effort to spend my free time in activities that demand that I be “present.” TV is a horrible off-hours activity because you’re only half engaged. Going golfing with my family or taking my son to the zoo – these things forcibly pull my mind away from work and do a better job of re-charging my batteries. So real relaxation comes from finding those other activities that we’re passionate about and that demand that we be present.