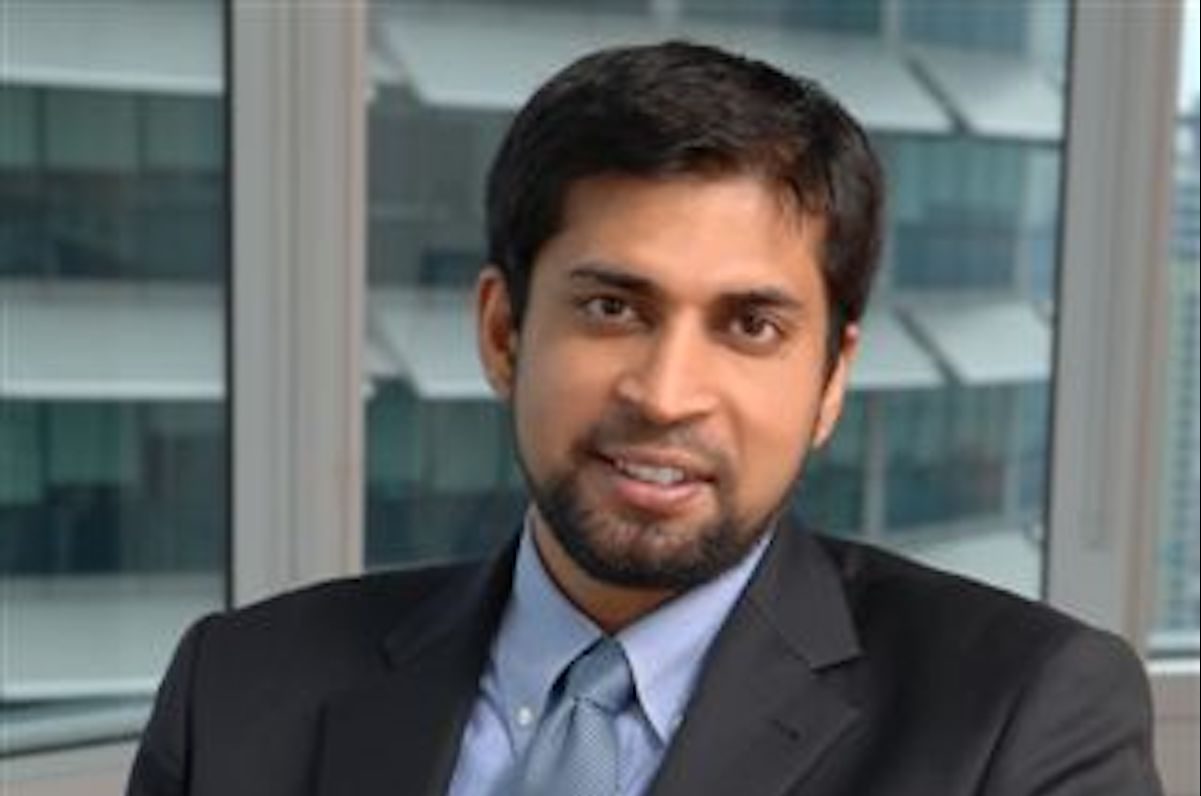 Shahzad Bhatti is CEO at Axiom Learning, an education firm focused on academic support, study skills, and programs for struggling learners. An alumnus of Harvard Law School and Harvard Kennedy School of Government, Bhatti works with nonprofits like the Bill & Melinda Gates Foundation to make education more equitable and effective.

Two places: The first is that my wife and I have three kids of our own. At one point, my son’s school called us, accusing us of withholding information. My son’s “crime”? Being too quiet. He was 3 or 4 at the time. My wife and I walked out, thinking, “If the education system is treating us like this, then how is it treating a single mom, working two jobs just trying to make it?”

The second is that I used to be director of investments at an Asian private equity fund. When I was leaving the fund, my wife (and co-founder) and I looked at what skills we had that could help solve the world’s problems. What pointed me toward education is that, wherever I went in my travels for work, I’d have the same conversation over and over again. When talking to business leaders, they’d say, “We have jobs to offer, but we can’t find the people to fill them.” Then, the proverbial man on the street would tell me, “I’ve been looking for a good job for years, and I can’t find one.”

That’s when I realized that the horizontal that cuts across all the verticals is education. We’re doing a poor job of giving our kids the skills they need to be competitive in the marketplace of the future. That’s doubly true for kids with learning challenges — especially those who aren’t getting the ADHD treatment they need — which is why they’re a focus of ours.

I get up at 5:30 a.m. each day, which is my thinking time until I drop the kids off at school by 7:30 a.m. The rest of my day varies, but it’s usually calls with management teams, fundraising, and run-of-the-mill firefighting. Given the importance of people to our firms, I spend 10 to 15 percent of every week making sure that each of our top 20 or 25 people are engaged in challenging work that helps them meet their potential.

Somewhere during the day, I build in a workout. The only reason I don’t exercise every day is if something I can’t control gets in the way — normally travel. The time I spend working out pays me back many times over in increased efficiency.

The other way I stay productive — which I stole from Steve Jobs — is I sit down each quarter and say, “What are the three things I need or want to focus on for the next three months?” Those three headline things define how I spend my time. Without a mechanism for guiding my choices, it would be too easy for me to get lost in the details.

Most importantly, I schedule time for family. I work long hours, but I spend 5 or 6 p.m. until 9:30 p.m. with my kids. I’ve seen too many otherwise successful professionals become unhappy because they’d botched being a parent. You don’t get a second shot with your kids to get it right, so it’s important to get it right.

At Axiom, every decision we make starts with one or more of our four key values: excellence, integrity, industriousness, and innovation. If I’m explaining why I think we should do something, I have to explain the value the drives that decision. If I can’t ground it in one of those values, I’m probably not going in the right direction.

The second thing is that we have a lot of really smart people in education. When I run ideas past them, they sometimes say, “That’s not a good idea,” and we figure out a stronger pathway forward. Once the team buys in, though, the execution is pretty straightforward. We start by asking, “What does success look like at the end?” Then, it’s just a matter of defining the right metrics and pairing them with incentives to make sure everyone is aligned in achieving that vision.

What excites me is that our understanding of how the brain works and how learning happens has advanced dramatically. Even compared to 10 years ago, there’s so much more research happening. Frankly, it’s happening at an opportune time: Whether people are ready for it or not, education is going to be transformed over the next 20 or 30 years.

That’s going to happen for a few reasons. The first is that it’s getting increasingly expensive to deliver a quality education. The second is technological change, which is both scary and exciting. Many of the jobs people are training for today may not exist in 30 years because of advances in automation and artificial intelligence. Imagine a 15-year-old today: When automation has taken hold, he’s going to be in the middle of his career. Technology taking his job at that point would be incredibly disruptive.

The good news is that disruption is a chance to redefine what a good education is and how we deliver it. Our goal should be to use technology to prepare kids for the future they’re going to face.

“Seek out people who are the best at what they do, especially in the things that you yourself want to get better at.” Define the impact you want to have on the world, and then find mentors to help you make it.

The most successful people I’ve met — not just the most professionally successful people, but people you’re drawn to because they’ve made a difference — surround themselves with smart people. By the time I got my first mentors, I was about 30. I could’ve saved myself a lot of headaches by seeking people out earlier.

In the coming decades, society’s polarization is going to worsen. Thanks to the 2016 election, in particular, I think things are going to get worse before they get better.

But again, we get to choose how we respond to societal flux. I try to define my choices as “What’s the best version of myself that I can bring to the table?” My hope is that others are thinking that way, too.

I spend a lot of time listening. In every business I’ve started, I’ve had to pivot because the market told me so. Listen, look at the data, and be nimble.

I’ll also say that there’s no substitute for hiring well. I’ve seen amazing ideas crash and burn in the hands of mediocre people. I’ve also seen mediocre ideas succeed when led by great people. There’s no remedy for getting your team wrong.

We recognized early how big the digital attention economy would be. We’ve built our marketing paradigm around the fact that people are spending more and more time online.

The other strategy is one I learned from Danny Meyer, author of “Setting the Table.” He has a policy he calls “ABCD”: Always Be Connecting Dots. It means don’t just do the job for clients; give them a great experience. That’s what gets people talking about you. It’s more than an idea — it’s a culture you have to build.

When we started Axiom Learning, we set up operations in Asia and in the U.S. We learned that when you have teams around the world, you have to be careful with systems and processes.

What happened is that while my co-founder, Aisha, and I were in Asia getting that side of the business established, the U.S. operation was set up by someone who wasn’t aligned with our mission. Aisha and I believe education should be a public good. The reason we have to do it privately is that our public institutions are not serving our kids with learning challenges effectively.

When we came back to the U.S., however, we discovered that team was antagonistic toward our mission and unwilling to put in the work. After spending several months trying to fix the culture, we realized we had to start our U.S. team from scratch. It was incredibly hard to let people go, but candidly speaking, we probably should have done it sooner.

I’d like to see a lending institution focused on low-income neighborhoods. There’s so much opportunity in fixing the inefficiencies in how we allocate capital. African-Americans, Latinx, Native Americans, and even rural Caucasians are shut out from economic opportunity because underprivileged groups’ business ideas just don’t get funded.

There’s a lot of talent and opportunity being lost, and it’s entirely addressable. There would have to be an assessment for entrepreneurial skill, but it’s frankly un-American to exclude entire groups from opportunity. Our history is built on the idea that hard work and ingenuity will be rewarded. Somebody is going to make a killing empowering communities like that.

I just bought a subscription to Masterclass.com, which offers tutorials from people who are the best at what they do. I don’t have much spare time, but I learn a lot when I do tune in. Aaron Sorkin has some great tips about writing, for example, while Steph Curry teaches viewers to shoot a basketball.

“Getting Everything You Can Out of All You’ve Got” by J. Abraham. It’s a cheesy title, but it’s the best marketing book I’ve ever read. Its principles are total common sense, but somebody has to tell them to you.

I’d also recommend “The Alchemist,” which argues that an extraordinary life is built by making extraordinary choices. Doing what other people do is a recipe for mediocrity. Who grows up saying “I want to be average”?

There’s an African saying, “If you want to go fast, go alone. But if you want to go far, you must go with others.” The point is that you need a capable team to make an impact. You need to learn to work with others constructively, even if you don’t agree on every point.