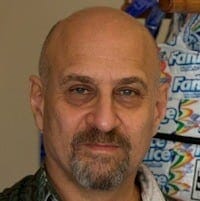 [quote style=”boxed”]The way I see it, If you can imagine it then you can probably create it.  However, I also realize that good ideas are rarely attributable to one person but are built on ideas that other people have had and which have become part of our own toolbox.[/quote]

A founding member of Trashy Bags Project, Stuart Gold’s background was in architecture, where he qualified in the UK in 1980 and practiced for seven years before specializing in computer database applications.  In the 90’s he began working on the development of Internet software technology in both the UK and USA. He came to Ghana in early 2006 and began Trashy Bags in 2007.

The idea is based around a simple product that we developed at Trashy Bags that is made from seventy discarded plastic drinking water sachets, collected from the streets of Ghana, which are then stitched together to make a cool reusable shopping bag called the Trashy Smart Bag. The bag is the best selling product at Trashy Bags because it really is trashy, being almost 100% recycled. Smart because it cleans the environment, and the way it folds into its own base and carries a huge weight of shopping makes it even smarter.

The idea is to work with companies who will provide sponsored advertising on the bags and so reduce its cost, making it affordable for Ghanaians to buy cheaply in markets and food outlets to replace the disposable plastic bags that are becoming a menace to the environment. Making it possible to produce in large volumes will help to reduce the plastic pollution problem, educating the population in West Africa and employing more people to make the Smart Bag.

The first trend that I think has been a long time in coming, is increased environmental awareness. At last, people are starting to understand the concept of a finite world and the simple fact that the world that we all share has to be maintained in a sustainable way.

Secondly, the sudden clamber towards democracy in certain parts of the world inspires me because it gives me back my faith in humanity. This was recently shaken by scenes on TV of grown men dancing in the streets while kissing pictures of their beloved tyrannical leader. Believe me, that was one bugaboo that had me reaching for my TV remote!

The third trend that excites me is really similar to the second. I live in a small African nation that has shown itself to be much bigger than many richer countries that are still under the thumbs of petty dictators. Ghana still has enormous problems, not least of all with poverty and corruption. But, with a stable democracy it has gradually shaken off the yoke of tyranny allowing freedom of the press and free and fair elections. Ghana is one of only two countries in the world that increased its score in the world democracy rankings published in 2010 by the Economist Intelligence Unit.

To me the growth of environmental awareness and democracy in the world are exciting because they point to a gradual increase in humanity’s collective intelligence.

The way I see it, If you can imagine it then you can probably create it. However, I also realize that good ideas are rarely attributable to one person but are built on ideas that other people have had and which have become part of our own toolbox. I believe we really do ‘stand on the shoulders of giants’.

I have always been inspired by human ingenuity and the ability of people to overcome seemingly insurmountable problems. I am one of those sad people who stare admiringly into the gaping air intake of a jet engine while I mount the steps of an airplane. I still marvel at the magic of cell phones, stare dumbly at a DVD, wondering how the dickens they manage to put a feature film on that thin shiny surface, and I am inspired by seeing a crazy but brilliant team of engineers design and build a 560 ton airplane that carries 800 people thousands of miles in safety and comfort at a height of 35,000 feet.

Maybe these things don’t sound like inspirations for someone running an environmental social enterprise but I am unashamedly of the belief that science and technology will be the source of our eventual salvation and without them we have no chance.

Well, when you have made as many mistakes as I have then you find it difficult to remember just one. So I will treat this question philosophically and say that the biggest mistake I ever made was trying NOT to make mistakes. Like most people, I was taught that mistakes were to be avoided if at all possible. It was only later in life that I realized mistakes are the lifeblood of creativity.

I feel that human endeavors over the millennia have mirrored evolution by natural selection which shows us that even though every single one of our ancestors was successful in biological terms going back billions of years, they were successful only at the expense of a vastly greater number of failed potential ancestors. Similarly there are so many mistakes that people make in their lives that can be thought of as wrong-turnings. However, all those so-called mistakes were essential to get us on the path we currently occupy and make us and our final achievements even richer in the process.

What is one book and one tool that helps you?

In terms of software I could of course mention all the usual tools such as spreadsheets, graphics programs etc.  However, that would be completely boring so I will have to say that the piece of software that has always inspired me and probably always will is Activeworlds.  This is not so much a piece of software or tool but an online system that provides a completely alternative or virtual reality.  Activeworlds was a pioneer of its time and has been going for well over a decade and I am pleased to say that it still provides enjoyment to all of its followers.

As for a book – well I cannot say that any one book helps me because once I read a book I just go onto another one.  However, if I have to mention a book that inspired me to think the way I do today then I would probably place the ‘The Blind Watchmaker’ by Richard Dawkins as one of the most memorable and inspirational books that I have read.

I would have liked to see Douglas Adams interviewed but alas we are a bit late as he is no longer with us. I mention him only because, to me, he was the quintessential English intellectual who had an outlook on life that was truly inspirational, with a wit and sense of humour that seemed to put life squarely in perspective.

Second in the list would be Richard Dawkins. He, like Douglas, is not a business person but his insights into life have been inspirational to me and so many others through his wonderful books.

Third would be Bruce Damer, a long time friend, who has a brain ‘the size of a planet’ and with whom I have spent many memorable hours discussing the intricacies of the parallel realities that are emerging on the Internet and their significance to the world we live in.

[box size=”medium” border=”full”]This interview was scouted by TheIdeaScout.com, a group-edited publication, with a mission to scour West Africa for the most innovative and promising ideas, concepts, and ventures that appear well positioned for regional or international adaptation, expansion, cooperation, investment or partnering.[/box]