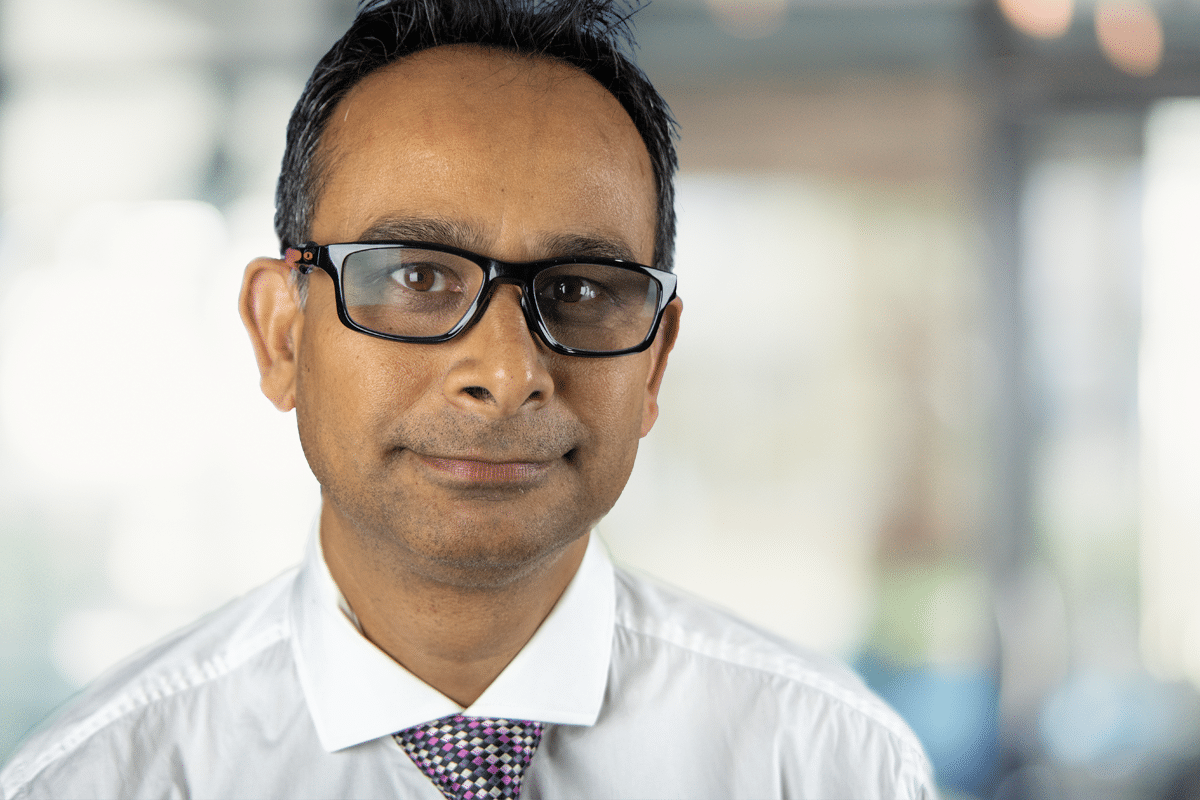 Be more focused and believe in your dreams, work hard and never give up.

Subrata was born in Assam, India. Assam is a state in Northeast India, on the foothills of the Eastern Himalayas and Brahmaputra valley, famous for its tea plantations “Assam Tea”, Assam Silk and wildlife, especially the one horned rhinoceros. It is home to people from a different race, ethnicity and religion. Subrata’s father worked for the Indian Armed Forces and his family moved to different parts of India every three years due to his transfer. Subrata grew up with his two elder sisters in Army cantonments along with his family. He studied in government schools and graduated high school with distinction. During school years, he was very active in academics, music and sports. Following his passion to become a physician, Subrata applied and was selected for MBBS course at the prestigious Gauhati Medical College, Guwahati. After successfully completing his medical degree, Subrata decided to follow his father’s footsteps by joining the Indian Army as Short Service Commissioned (SSC) officer in the rank of Captain. He served in the Army Medical Corps for five years before he was released from active service in the rank of Major. During his tenure in the Army Major Subrata Chakravarty was recommended for Vishisht Seva Medal ( awarded to recognize “distinguished service of a high order” to all ranks of the Indian Armed forces). In pursuit of higher education, Subrata joined the prestigious Delhi University for post graduation and specialization in Anesthesiology. After completing his MD in Anesthesiology Subrata was selected as Registrar in the Department of Anesthesiology and Pain Medicine at the All India Institute of Medical Sciences (AIIMS), New Delhi which is the largest tertiary care hospital with twenty-five clinical departments including four super specialty centers and manages practically all types of disease conditions. Subrata was also a Senior Research Fellow with ICMR (Indian Council of Medical Research), New Delhi, India. Subrata was selected to do a two year fellowship in labor analgesia at the iconic K K Women’s and Children’s Hospital in Singapore which is the largest hospital specialising in healthcare for women and children in Singapore. Alongside his clinical work, Subrata continued doing research and presented his study on “Comparison of automated intermittent low volume bolus with continuous infusion for labour epidural analgesia at the Annual Meeting, American Society Of Anaesthesiologist (ASA) Chicago and Annual Scientific Meeting KKH Singapore .The study was later published in a peer reviewed journal of Anesthesia Intensive care in 2010. While training in Singapore, Subrata also completed the CITI (Course In Protection Of Human Research Subjects) which is very crucial when being involved with humans as research subjects.

As an Anesthesiologist, Subrata was always involved in teaching and practicing safe airway management. He did another study titled “Use of laryngeal mask airway: a survey of anaesthetic practice among anaesthesiologist in Singapore” which he presented at the Annual Scientific Meeting in Singapore. Subrata then followed his passion for labor analgesia and anesthetic management of high risk obstetrics cases which brought him to the University of Toronto for another three year fellowship at the prestigious Mount Sinai Hospital, Toronto. Subrata presented a paper at the SOAP annual meeting in Texas in 2009. His three years fellowship at Mount Sinai Hospital was very fruitful in terms of teaching, research and training. Subrata got the “Research in Education Award” at the prestigious SOAP(Society for Obstetric Anesthesia and Perinatology) Annual meeting in 2010. Subrata’s passion for teaching and learning led him to do research in the field of simulation and his study ‘Effectiveness of using high-fidelity simulation to teach the management of general anesthesia for Cesarean delivery’ got published in Canadian Journal of Anesthesia in 2014. Subrata also participated in various other projects which included “ Auditory assessment after dural puncture during epidural placement in Obstetric Patients ,“Performance of Anaesthesia Assistants: A review of more than 10,000 cases under local/topical anaesthesia with IV sedation and Aseptic techniques during labour epidural analgesia: A Survey of Obstetric Anaesthesia Practice in Ontario’. During his fellowship training in Toronto, Subrata acquired his permanent resident status in Canada. Canada was his home now and after successfully obtaining his license to practice medicine.

Subrata joined as a Staff Anesthesiologist with Alberta Health Services and has been working with them since then. Subrata continued to practice and teach and was appointed as Assistant Clinical Professor at the University of Alberta. Subrata currently lives in the beautiful city of Edmonton with his family. He enjoys the natural beauty and enjoys the bike rides with his family. He is happily married to his wife of more than two decades and has two great kids.

After completing my tenure in the Army, I decided to pursue higher education and specialization in Anesthesiology. My aim was to do active clinical work where skills and knowledge would go hand in hand. I realized that Anesthesia would give me that platform where I would be able to take care of challenging cases and scenarios which requires both skill and expertise.

Most of my work requires hands on care for patients who are scheduled for surgery. It starts with a focussed preoperative assessment for evaluating the risks and for planning the course of Anesthesia care for the patient. My role is that of an intraoperative physician who looks after the patient undergoing surgery from initiation of Anesthesia till the recovery phase.

I make my day productive by trying to make a very conducive environment during surgery. I always make sure that I speak with each patient scheduled for surgery, answer their questions and alleviate their fears. It brings confidence in them as these patients are very vulnerable before surgery. They put their complete trust in us and I take this responsibility very seriously.

I bring my ideas to life by discussing it among family, coworkers, and friends. Implementing ideas is much simpler if you had a healthy discussion or debate in a civilized way.

I am very social and interact very easily with people. It helps build confidence in people to approach me and suggest their ideas and suggestions which I can use in a constructive way to be more productive. In addition, I work very hard to achieve my targets.

To be more focused and believe in your dreams, to work hard and never give up

I believe that I sing well and could have been a good singer by profession, which nobody agrees with me about!

I always plan and rehearse ahead of my projects. I do a lot of groundwork and research before I start a new project. It is important to be very clear of your goals and stay focused.

I put my trust in my team and listen to all suggestions earnestly. I also show respect to all my team members. Involving my coworkers and other staff in running the day to day activities has helped me grow. Once people believe that it is their own project, they tend to share your dreams and goals, which helps in achieving your goals as well. I believe in shared dreams.

I put my trust in people very easily and that has led to disappointment on many occasions. Nowadays I consult my family and friends before I entrust responsibility to a new person whom I had not worked with before or had little interaction with. Only after I have satisfied myself about the integrity of a person, do I now give them more responsibility

If an application (app) can be made to calculate the dose of pain medication for chronic pain patients. This application in the gadget will calculate the recommended dosage taking into account the patients’ age, the severity of pain, coexisting diseases, patients vital signs( like BP, HR, Temp, oxygen saturation). This way patients can take pain medications safely at home after calculating the required dosage. Obviously there would be safety mechanisms in place.

My wife and I went to see a stand-up comedian. It was a great decision as we enjoyed every moment of the show. We laughed a lot and enjoyed the evening very much.

I use the End Notes to write the manuscripts of my research work. it is of tremendous help to me in getting the script well organized and use my references in a correct manner.

Love Story by Erich Segal. It is very important to value love and emotions in our life as a person’s situation could change overnight. It is love which binds us together during difficult and challenging times.

• It is important to build relationships on the foundation of love.
• Be sure of yourself and stay focused.
• Work hard, there are no shortcuts to success.
• It is important to appreciate the gift of life and spend quality time with your family and friends.
• Take pride in your work.